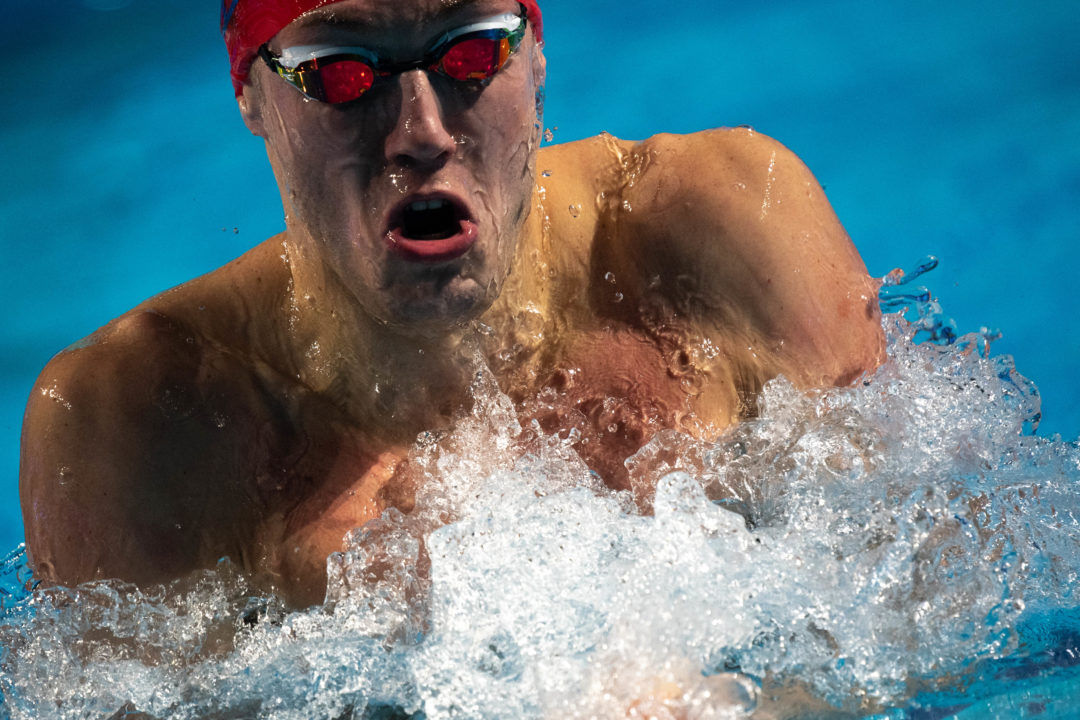 After a string of impressive performances throughout the International Swimming League (ISL) season 2 and beyond, Belarusian Ilya Shymanovich earned the 2020 Swammy Award for European Swimmer of the Year.

The 26-year-old breaststroking ace not only swam between 55.3 and 55.8 six separate times in the SCM 100 meter breaststroke between November and December, but he capped off his year by breaking the World Record in that race with a mark of 55.34.

SwimSwam recently spoke with Shymanovich with the postponed 2020 Olympics now on the horizon fewer than 185 days away. He said that his performances in the ISL have only helped build on his training foundation in the hopes of improving his 12th place finish in the 100m breast from the 2019 World Championships at this year’s Games, which are still slated for July.

“I think the 2nd season of ISL was productive for me. I had a lot of fast races with strong guys. I was very happy about my results. It was absolutely a new level of competition because every swimmer had their own way of racing.  I like this bubble atmosphere because all the sportsmen were in one place all together. It created a unique and united atmosphere for all of us.”

As successful as Shymanovich was in the ISL, his racing did not escape scrutiny by both peers and coaches alike. We reported in November how London Roar head coach Mel Marshall, also the regular coach of Olympic champion breaststroker Adam Peaty, dedicated several sequential social media posts to what she said was a rule violation in breaststroke races, specifically in match #6.

Including race snippets from Shymanovich, as well as Tokyo Frog Kings’ Vlad Morozov, Marshall’s post included underwater video with the swimmers’ legs appearing to undulate during the non-pullout part of the race. She posed the question, to the swimmers, their respective teams, as well as the ISL itself, “Can you confirm these moves are in the rules?” Marshall specifically tagged these individuals as well, speaking directly to them.

“Simple my mom taught me to play by the rules! Have watched this happen over and over again from 2012 onwards. Underwater it’s still a brs [sic] race with 1 fly kick!”

The Loughborough National Centre lead coach continued, “So disappointed. People and competitors who I respect slipping into looking at breaking the rules to win. It’s what we do in the shadows, when no one watches, that shows what characters we are.”

When asked about his thoughts on being called out for dolphin kicking, Shymanovich said, “Each sportsman has his own individual technique to achieve the best result.

“People say that I have a very narrow kick and some of them consider it to be illegal, but it doesn’t break any FINA rules.”

Shymanovich also said, “I hear about using underwater video during the Olympic Games and World Championships, and I must say that I’m for this idea.”

After representing Energy Standard in the Budapest bubble, Shymanovich is now home in Minsk training with his first and only coach, Elena Maliuska. The pair have been together for 16 years, speaking to the bond they have as athlete and coach.

As a nation, Belarus has not been without some turbulence as of late, with re-elected President Alexander Lukashenko having been accused of election fraud. This led to protests, the alleged jailing and exiling of opposition members, as well as an athlete group being formed, headed by retired Olympic swimming medalist Aliaksandra Herasimenia, advocating on behalf of the Free Association Athletes of Belarus.

According to Shymanovich, however, this societal unreset sits outside the of the pool. He said, “the political situation in our country doesn’t influence my training process. I always try to do my best.”

In terms of the other major current disruption taking place around the world, which is that of the coronavirus pandemic, Shymanovich said that his training in Belarus has been largely unaffected. “I follow all health rules and train as usual.”

Finally, when reflecting on the success that the nation of Belarus has had in the pool in recent years, Shymanovich attributes the upward trajectory to the support given to athletes by the Belarusian Swimming Federation. “They are contributing to our success and improvement when it comes to national swimming.”

If she were the coach of some lesser swimmer who was losing it might be whiny. But as coach of Adam Peaty she has nothing to personally gain for bringing this to light. Therefore courageous not whiny.

Pretty nice underwaters and above head cameras (towards the end of the video). Judge for yourself:

100% agree. Ever since kitajima got away with the dolphin kicks, I’ve been paranoid about how many swimmers at that level have gotten away with stuff.
(Not that there is a ton, but enough to complain about)

It would be very fitting to see peaty beat shymanovich in the 100 breast with the first ever sub :55.

She brought it to light, to the point that there might actually be positive momentum for change. So what she did worked.

Sure. Wanting swimmers to follow the rules and not be allowed to get away with cheating. So whiny and unreasonable…

and now you’re complaining about her online with no constructive value at all, how ironic. and now i’m doing it too, damn

What about Michael Phelps pulling breaststroke with a dolphin kick? Russians need to stop cheating.

Ilya is not Russian. He is Belarusian.

That just means beautiful Russian though in Italian. /s

funny how the german name for belarus is literally “white russia”

when did Phelps ever do that? Also, Ilya is from Belarus, not Russia

“I hear about using underwater video during the Olympic Games and World Championships, and I must say that I’m for this idea.”

I’m excited to see this backfire on him.