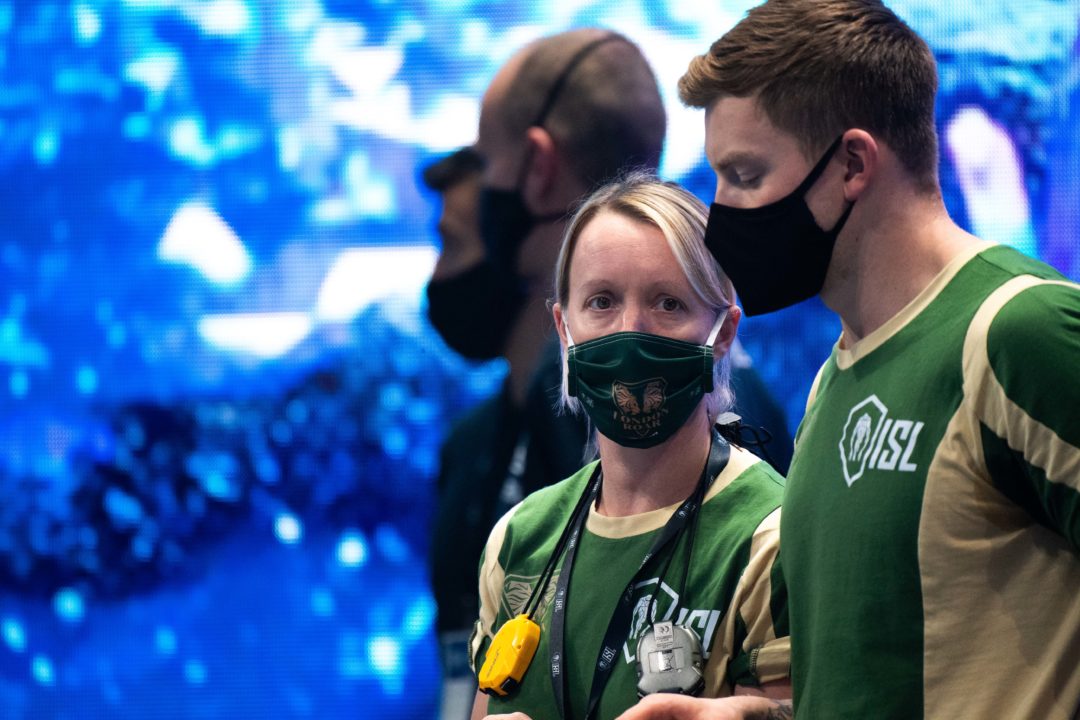 The trash-talking is heating up as the ISL season rolls on, with London Roar coach Mel Marshall calling out illegal dolphin kicks in breaststroke. Current photo via Mike Lewis/Ola Vista Photography

Match #6 of the International Swimming League (ISL) season 2 may have concluded, but the trash-talking is just now heating up among the ISL teams.

On her Instagram account today, November 2nd, London Roar head coach Mel Marshall, also the regular coach of Olympic champion breaststroker Adam Peaty, dedicated several sequential posts to what she says is a rule violation by other teams in the breaststroke discipline.

Including race sippets from Energy Standard’s Ilya Shymanovich and Tokyo Frog Kings’ Vlad Morozov, Marshall poses the question, to the swimmers, their respective teams, as well as the ISL itself, “Can you confirm these moves are in the rules?” Marshall specifically tags these individuals as well, speaking directly to them.

The underwater video depicts the swimmers’ legs appearing to undulate during the non-pullout part of the race.

In the final post, Marshall states, “Simple my mom taught me to play by the rules! Have watched this happen over and over again from 2012 onwards. Underwater it’s still a brs [sic] race with 1 fly kick!”

The Loughborough National Centre lead coach continued, “So disappointed. People and competitors who I respect slipping into looking at breaking the rules to win.

“It’s what we do in the shadows, when no one watches, that shows what characters we are.”

Energy Standard’s Shymanovich, whom Marshall specifically mentions, established a new European Record during the just-finished match #6, hitting a new lifetime best of 55.86. He also took the 50m breast in Budapest during the match.

As for Morozov, the Russian-slash-Tokyo Frog King most recently finished 4th in the 50m breast in match #5.

Alright but what would Mel do if one of her own swimmers are cheating? I’m sure she wouldn’t be trying to call them out the same way.

She 100% wouldn’t stand for it. Listen to one interview with Mel and you get a sense of how honest a coach she is. She wants her swimmers to win, but she wants them to do it right.

Hi. I bet you she would. She’s a lead coach and she is duty bound to report and I reckon her swimmers wouldn’t do it anyway. However during a pullout underwater phase legs can naturally undulate when you pull arms down to the hips. Hope swimmers are not taking advantage of that and exaggerating that. !!

So you agree they cheated.

I swear, the literal stroke breast stroke is the most controversial thing to happen since the super suits.

Agreed. And it’s probably been the most controversial since ever. The invention of Butterfly was the by product people trying to cheat in Breaststroke.

whoa overwater recovery was a loophole, not trying to cheat! I dont understand why its so difficult to stick within the confines of the rules. I agree with Braden, video review needs to be implemented in the sport especially in breaststroke where blatant and intentional cheating is so rampent. We also need to stop bending and changing the rules of the stroke to support athletes that cheated *cough*kitajima2004*cough*

Cheat!? They operated within the limits of the rules at the time. Sorry, that’s not cheating.

I often muse if we should just eliminate breaststroke from swimming, given how historically difficult it’s been to maintain the stroke within its boundaries, but then I think about it and I just like the aesthetics of 4 strokes better than 3 strokes.

We need to use videos to make these calls if we have any hope of controlling this. If you start disqualifying swimmers at international finals regularly, you’ll see these ‘bad habits’ melt away real quick.

Either they wouldn’t make the finals, or there wouldn’t be enough to fill a podium after said final took place…..

nooooooooo! the world will fall into chaos with 150IM and 300IM at worlds and Olympics… and 75m IM at ISL…. LOL

Should they replace it with elementary Backstroke or side stroke (courtesy of Red Cross Learn to Swim) ?

I love sidestroke! It was always my best stroke 😂

We need officials to start disqualifying swimmers for cheating. I’m an official, and the crap I see get ignored at nationally televised meets is embarrassing. The officials at these competitions are part of a cabal, and you have to kiss ass and keep your hand down at big meets to get selected to return.

90 percent of casual swimmers swim breastroke (or about 99 percent in a British public pool)!

I also noticed that “dolphin kick” that shymanovich did into the finish but I’m no breaststroker so I have no idea if what he did was legal but I will say he didn’t take a full stroke into the wall so he couldn’t have gotten a full breaststroke kick in.

youre allowed to take a stroke without a kick, something thats occasionally done when timing into the wall is poor, but thats a clear illegal downward dolphin kick in both instances which is very much so illegal

I mean the stroke / no kick

I missed the video…was it similar to Reese’s kick at the finish at nationals cpl years ago?

That happens A LOT more than people notice above water…