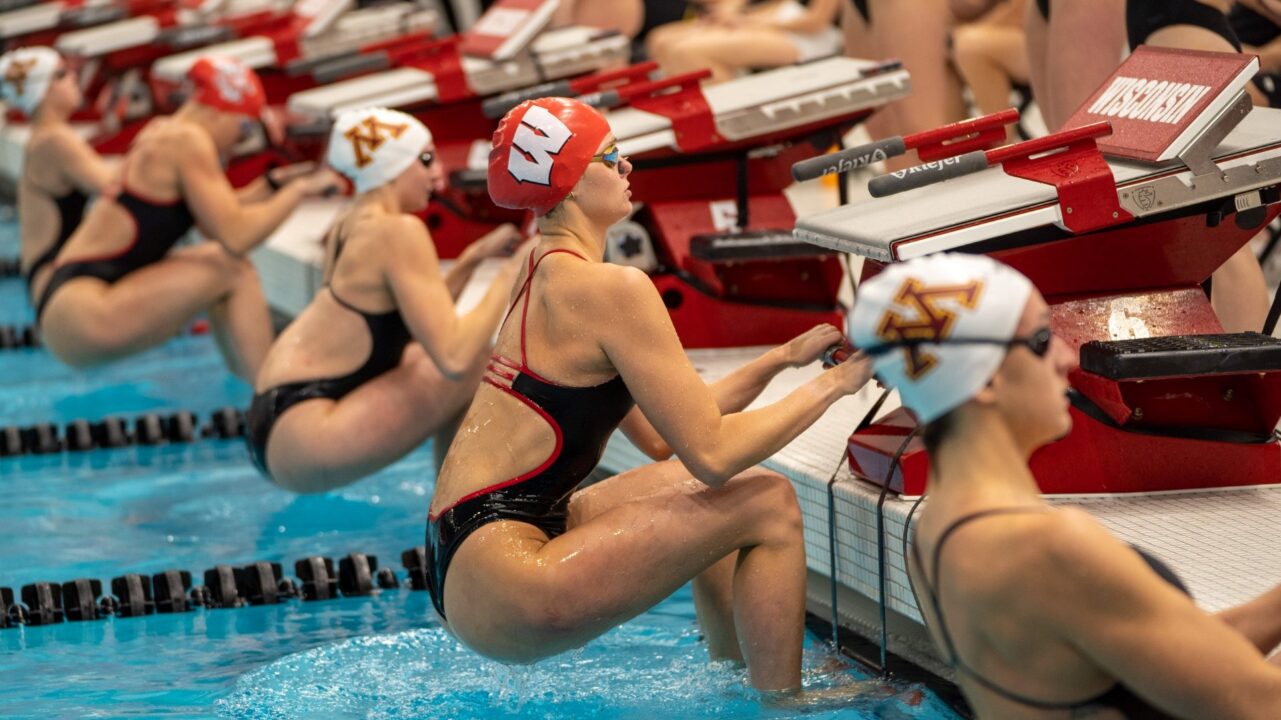 Wisconsin hosted Minnesota for a combined Big Ten dual on Friday, besting the Golden Gophers by large margins in both men's and women's scoring.  Archive photo via Wisconsin Athletics

Wisconsin hosted Minnesota for a combined Big Ten dual on Friday, besting the Golden Gophers by large margins in both men’s and women’s scoring.

Wes Jekel was a triple event winner, sweeping the backstroke events and winning the 200 IM as well. Jekel swam a 47.99 in the 100 back, leading the field by over half a second. He went on to post a 1:47.33 in the 200 back, taking over the race on the third 50 and holding his lead into the finish.

Wisconsin swept the sprint free events, starting with Ben Wiegand posting a 20.00 in the 50 free. Teammate Andrew Benson got the job done in the 100 free, speeding to a 44.02.

Minnesota’s Kaiser Neverman swept the fly events, swimming a 47.94 to take the 100 fly. Earlier in the meet, Neverman finished in 1:46.96 in the 200 fly, establishing a big early lead, and holding on through the back half of the race.

Minnesota’s Bar Soloveychik claimed victory in the 200 free, holding off a late charge by Wisconsin’s Dominik Mark Torok. Soloveychik touched in 1:37.49, just ahead of Torok’s 1:37.69.

Van Berkom would win another very close race in the 200 IM, swimming a 2:00.20, just 0.01 seconds ahead of Wisconsin’s Phoebe Bacon. She was trailing again at the halfway mark of the race, but superior breast and free legs put her in position to touch Bacon out at the finish.

Bacon won a pair of events herself, sweeping the backstroke races. She swam a 54.35 in the 100 back, leading the field by nearly a full second. Bacon was even better in the 200 back, where she clocked a 1:55.61.

Bacon also helped the Wisconsin 200 medley relay to victory, swimming a 25.21 on the lead-off leg, marking the fastest backstroke split in the field. Hazal Ozkan split 28.50 on the breast leg, followed by Mallory Jump with a 24.26 on fly, and Abby Wanezek with a 22.66 anchor leg. The Badgers finished in 1:40.63.

Hannah Cornish (Minnesota) finished in 22.94 to win the 50 free for Minnesota, touching first by 0.40 seconds. She would go on to take second in the 100 free in a very close race with Wisconsin’s Abby Carlson. Carlson would establish a small early lead on the first 50, then managed to hold on as Cornish tightened the gap. In the end, Carlson finished in 50.56 to Cornish’s 50.59.

Spencer- great article, can you change the pic (IU Swimmer) and it is Jake Newmark, not Jake Newman, for the Badgers.

This was straight up painful to read- multiple UMN swimmers listed as Badgers and vice versa.

I feel like Wisconsin is generally on the slower in season side of things compared to other top 25 teams so this could bode really well for them this year moving up the ranks. It seems like the women have a little bit more relay fire power and there could be another couple individual scorers to support the points from Bacon and McKenna.

O how the Gophers have fallen. Wonder when they’re gonna make some changes.

I am not sure it is bad recruiting because it is most likely that the top 100 recruits aren’t going to pick Minnesota anyway. Minnesota is just going to have to develop what they have if possible. A few things that I noticed is that the swimmers are not improving and that many previously good swimmers have dropped off their roster (not due to graduation). It is a tough pill to swallow as only a few years ago the women were at the top in the Big Ten, this year they may not even place in the top ten. However, I am hoping and praying and my heart still beats for Minnesota!

I wouldn’t say they aren’t developing. Look at how far Minnesota has already come from two years ago. Obviously, it’s hard to tell because it is in the season but I would say the Gophers are primed for a pretty good year. Look how great of a summer they had. They were one of the teams that stuck out to me at Nationals based on improvement alone. Even saying the women aren’t gonna place top 10 is ridiculous. They placed 6th last year and bring back not only a defending B1G champ but a diver that looks poised to win. Not to mention there was just an article about how good their freshman women are swimming. Obviously haven’t done your… Read more »