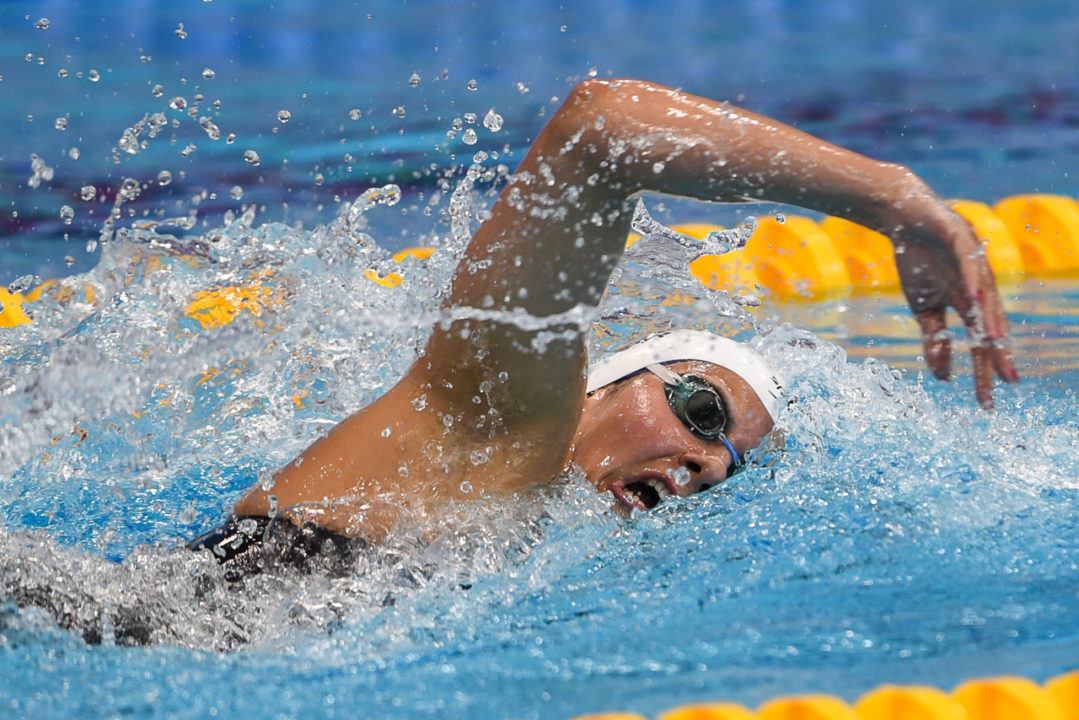 "I was a bit nervous that I would struggle before the end but I surprised myself," said Aimee Willmott said after claiming the 400m IM gold at the Swim England Winter Championships, most likely earning her spot on the Commonwealth Games roster. Archive photo via Peter Sukenik/www.petersukenik.com

Several of the key English swimmers have already earned Commonwealth Games qualifying marks at previous selection meets, but for those not yet officially on the roster the Swim England National Winter Championships serves as a last chance meet of sorts.

Aimee Willmott of the University Stirling took full advantage of the opportunity to race healthy, registering a winning 400m IM time of 4:36.89 to punch her ticket to Australia. Her field-topping time tonight is situated comfortably under the Commonwealth standard of 4:42.88, giving her a most likely berth on the English line-up for the Gold Coast.

On her outstanding swim tonight, Willmott commented, “I’m really happy with that. Coming into the meet I knew I had the time in me, I’ve done it countless times before but after the injuries I’ve had I was a bit nervous that I would struggle before the end but I surprised myself.

“It’s great to have other girls in the field going 4.40 as it’s good to push each other.”

As Willmott alluded, she wasn’t alone in nailing a solid swim, as both 2nd place Rosie Rudin and 3rd placeAbbie Wood also dipped under the qualifying standard. Rudin touched in 4:39.95 for silver and Wood finished in 4:40.30 for bronze. Both swimmers were excited with their efforts, with Rudin commenting, “It was very emotional as I had a very disappointing year. So I wanted to come here and prove to myself that I could do it. After the World’s I sat down with Russ [Barber, Rudin’s coach] and we talked about what I could learn from it and what to do going forwards which was really good.”

Another qualifying time was met by a woman, as Ellie Faulkner collected a hard-earned victory in the 200m freestyle over visiting swimmer Taylor Ruck of Canada. Faulkner already notched a qualifying time in this event at an earlier meet, but that didn’t stop the 24-year-old Sheffield athlete from lowering her own personal best to a new mark of 1:56.76. That beat out 17-year-old Ruck by just .06, as the Canadian touched in 1:56.94 for 2nd.

Faulkner wasn’t shy about hiding her satisfaction with a personal best, stating post-race, “To be honest, I’m in complete shock [at getting the PB]. I’m only partially rested for this meet because I’ve already qualified. So for me it was about racing hard and training hard at the same time.

“Coming out with a PB was a shock, but I feel like I have got much more to come and hopefully I can bring it out at the Gold Coast.”

Disappointment reigned in other events, as the men’s 100m backstroke field was devoid of a Commonwealth qualifier. 20-year-old Luke Greenbank registered the winning time of 54.48, a time that represents the quickest ever for the 20-year-old from Loughborough. However, it was a stretch from the 54.01 qualifying time. Of note, Greenbank has already been named to the roster in the 200m back, so it’s possible this sprint gets added to his repertoire in Australia.

As for runner-up tonight, 27-year-old Christopher Walker-Hebborn found himself outside of qualification as well, touching in 54.61 while Daniel Cross rounded out the top 3 in 54.76. The top 5 men were separated by less than 4 tenths of a second tonight.

Ironically, the men’s backstroke was perhaps the most satisfying result for Britain long term. Pyle (2000) and Clogg (1999) both had sizeable PBs to go under 55s for the first time. Greenbank with his first PB in a few years and Dan Cross making a move at the right age. Very average times for now, but all four are young and three train at the same club, so you’d hope to see one of them stepping up in the run up to Tokyo. As far as physical specimens go – Jacob Peters looks as impressive a 17 year old as I’ve seen. 200fl PB of 1.58.40, he needs 1.58.29 to hit the qualification standard – I’d love to see him… Read more »

Interesting analysis from Dee thank you. With CWH seemingly in decline there is a good opportunity for one of the named swimmers to emerge, benefiting the medley relay significantly.