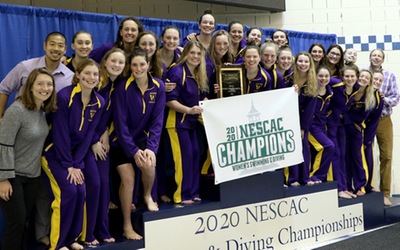 MIDDLEBURY, Vt. – Williams won 12 of 24 events en route to capturing its seventh straight NESCAC Women’s Swimming & Diving Championship and 19th overall. The Ephs totaled 1,930.5 points and were followed by Tufts (1,593.5 points), which was the NESCAC Runner-Up for the second year in a row, matching the Jumbo’s best finish in program history.

The first event of the final night of the NESCAC Championships was the 1650 freestyle. Laura Westphal of Williams won the event for the third straight year with a time of 17:05.88. Colby’s Addie Paige, the 2019 NESCAC Rookie of the Year, was the runner-up with a time of 17:05.88. Fellow Eph, Kerryann Reynolds (17:17.63) finished third. The top seven finishers in the race all achieved NCAA B-cut times.

Caroline White of Williams, the NESCAC Swimmer of the Year and the NESCAC 4-Year High Point Swimmer award winner, completed the four-year sweep in the 200 breaststroke. She won the event with a time of 2:15.05. Teammate Amanda Wagner followed in second place (2:15.59) and Amherst’s Nina Fitzgerald, the 2019 runner-up, was third (2:16.80).

Amy Socha gave Tufts its second win of the evening with a first-place finish in the 200 butterfly. She successfully defended her title in the event with a pool-record time of 2:01.77. Amherst’s Marie Fagan improved upon her third-place finish in 2019 and was the runner-up this year, posting a time of 2:02.08. Veronica Wolff of Williams rounded out the top three finishers with a time of 2:02.83. Seven of the eight swimmers in the championship heat achieved NCAA B-cut times.

Amherst’s Lindsey Ruderman, who garnered her third straight NESCAC Diver of the Year honor, completed the sweep of the NESCAC diving competition for the third year in a row. After winning on the 1-meter board earlier in the meet, she won the 3-meter event with 549.85 points to set a new NESCAC record, NESCAC meet-record, and Middlebury pool record in the process.

In the final event of the 2020 NESCAC Women’s Swimming & Diving Championships, the 400 freestyle relay, Tufts snapped the streak of 29 consecutive relay wins held by Williams. The Jumbos squad of Claire Brennan, Katelin Isakoff, Amy Socha, and Mary Hufziger combined for a pool-record time of 2:34.74. The Ephs were second at 3:24.85 and Connecticut College finished third (3:26.80).

The NESCAC individual awards were handed out to conclude the championship meet. The individual award winners were:
Swimmer of the Year – Caroline White, Williams
Caroline White was named the NESCAC Swimmer of the Year. She won two individual races (100 & 200 breaststroke) and was a part of two relay victories for the Ephs. White is the eighth Williams swimmer to earn the honor and an Eph has won the honor four consecutive years. She joins former Ephs: Meredith Olson (2001), Cristin Brennan (2002), Lindsay Payne (2003, 2005 & 2006), Logan Todhunter (2009), Sarah Thompson (2014 & 2015), Emma Waddell (20017 & 2018), and Laura Westphal (2019).

Diver of the Year – Lindsey Ruderman, Amherst
Lindsey Ruderman earns the NESCAC Diver of the Year award for the third consecutive year. She swept the 1-meter and 3-meter titles for the third year in a row and set a NESCAC record, NESCAC meet-record, and Middlebury pool record on the 3-meter board in 2020. She is the third Mammoth to garner the award, joining Meggie Meisinger (2011 and Lizzy Linsmayer (2013).