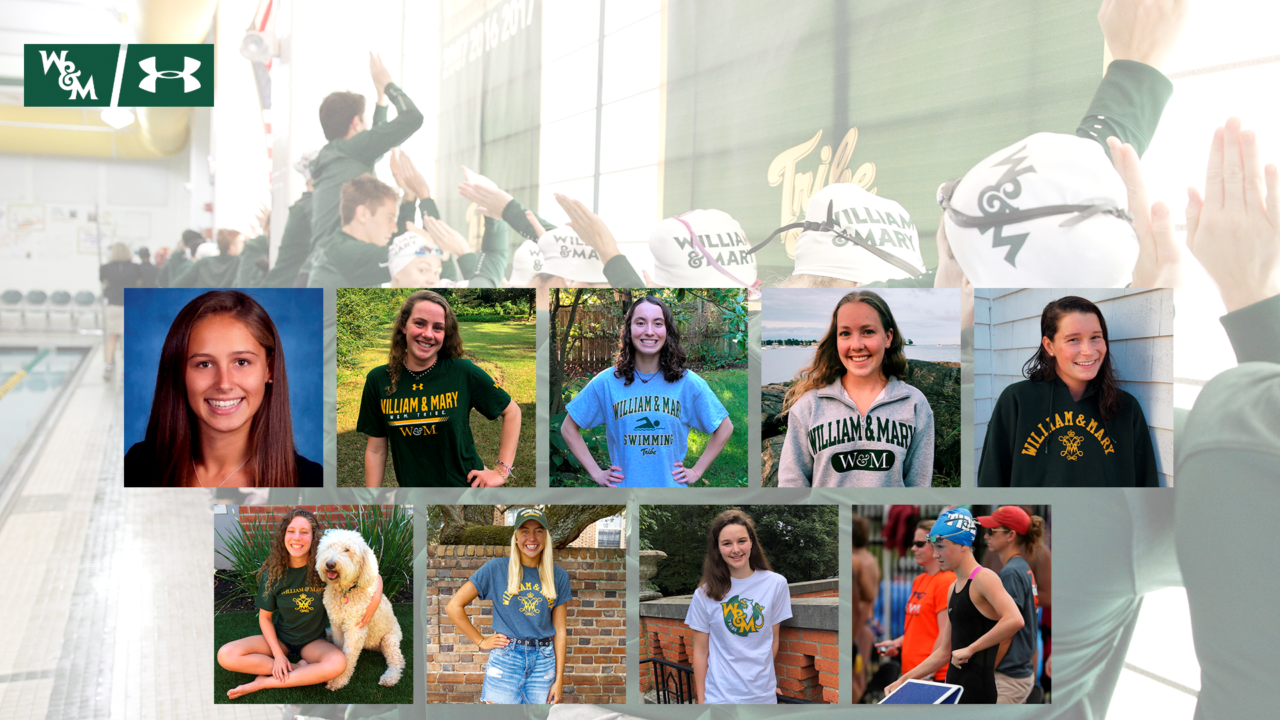 The William & Mary women’s swimming team will add nine freshmen to the roster ahead of the 2019-20 season, interim head coach Chris Carter announced today. The class includes five athletes from Virginia, as well as standouts from Connecticut, California, Ohio, and New York. Each of the nine women would have qualified for at least two finals at last year’s Colonial Athletic Association Championships, combining for a total of 28 finals spots including 12 championship finals.

“We are very excited to introduce these nine individuals to our Tribe,” Carter said. “It was going to take some special people to make up for our graduating class, but we believe we have found a group that is up to the challenge. These young women will make an immediate impact on our team, and will help our program continue to contend for CAA titles. Our goal is to find exceptional people who are great students and great swimmers, and this class certainly checks all three boxes!”

Prep
NCSA Junior Nationals Qualifier all four years of high school … Won the region championship in the 100 fly as a junior at Freeman … NCSA Summer Championships Finalist in the 200 fly in 2017 and the 50 fly in 2018 … AP Scholar with Distinction … Member of the National Honor Society … Also a member of the French and Math Honor Societies, as well as Mu Alpha Theta … Co-Treasurer of the French Club … Volunteer tutor.

Personal
Daughter of Katie and Mark Graff … Enjoys art, biking, and spending time with family and friends … Undecided as to her collegiate major.

Prep
Winter Junior Nationals in the 400m IM … NISCA Prep All-American in the 500 free in 2018 … Earned all-state honors each of the last two years … Three-time Ohio Division 1 State Qualifier … Scholastic All-American … Carried above a 4.0 all four years of high school … Member of the National Honor Society … Member of the Business Club.

Personal
Daughter of Tracy and Stephen Intihar … Father played basketball at Brown … Enjoys reading, getting ice cream with friends, and traveling with her family … Undecided as to her collegiate major.

Prep
Winter Junior Nationals Qualifier in both 2017 and 2018 … Qualified for the state championships all four years … Finished fifth in the 500 free and 10th in the 200 IM as a senior … Third in the state as a junior … Scholastic All-American … Named academic all-state as a senior … Member of the National Honor Society … Volunteer with the Pediatric Cancer Foundation.

Personal
Daughter of Amy and Chris Jogis … Father was a member of the 1992 U.S. Olympic badminton team and a six-time U.S. National Singles Champion … Enjoys traveling, photography, and reading … Plans to maybe major in economics.

Personal
Daughter of Carri and Richard Lamoureux … Enjoys surfing, art, and student teaching … Undecided as to her collegiate major.

Prep
Won the Virginia 4A state championship in the 100 breast as a junior … Also finished second in the 100 fly that year as well … 2019 Futures Qualifier … Honor Roll all four years … Vice President of the Student Council … Member of the National Honor Society … Secretary of Mu Alpha Theta.

Personal
Daughter of Jennifer and Erik Olsen … Father played baseball at VMI … Enjoys writing, reading, and going to the beach … Plans to major in English.

Prep
USA Swimming Summer and Winter Junior Nationals Qualifier … NCSA Junior Nationals Finalist each of the last three years … Championship finalist in the 200 IM and the 100 breast as both a junior and a senior at the Virginia 5A State Championships … Ranked among the national top-50 in the 200m breast (LCM) in 2017 … Helped her club teams to the girls’ runner-up trophy at the 2017 summer NCSAs, and to the combined runner-up trophy at the 2019 spring NCSA meet … Scholastic All-American … Member of the National Honor Society … Also a member of the BETA Club, Mu Alpha Theta, and the Spanish Honor Society.

Personal
Daughter of Susan and Heath Proffitt … Mother played basketball at Richmond … Grandfather, Cramer Harrington, enjoyed a Hall of Fame career in both basketball and baseball at SUNY Oneonta … Enjoys traveling, yoga, and spending time with friends … Undecided as to her collegiate major.

Prep
All-State and all-conference … Runner-up at the Connecticut State Open Championship in the 100 free … Helped Wilton finish second in the 800 free relay at the YMCA Nationals … Scholastic All-American … Volunteer with Best Buddies.

Personal
Daughter of Julie and Nick Stevenson … Enjoys fishing, magic, and playing with her dogs … Undecided as to her collegiate major, but interested in special education.

Personal
Daughter of Valerie and Michael Tramack … Enjoys reading, writing, baking, and playing with her dog … Plans to major in government and history.

Prep
Winter Junior Nationals Qualifier in the 100 breast … NCSA Qualifier in both 2018 and 2019 … Won the 2018 Virginia Independent Schools’ State Championship in the 100 breast … Four-time championship finalist in that event at the state meet … All-State each of the last three years … Helped win the Washington Metropolitan team title as a senior in 2019 … Named honorable mention All-Met by the Washington Post … Scholastic All-American … Leader of the Girls Learn International team at her school … Volunteer with Kids Helping Kids.

Personal
Daughter of Laura Denk and Jonathan Tuttle … Is the fourth member of her family to attend W&M … Mother graduated in 1989 … Father also graduated in 1989 after a Hall of Fame career on the Tribe men’s soccer team … Uncle, Robert Tuttle, graduated in 1985 … Cousin, Stephen Hardy, played tennis at the College of Charleston … Enjoys going to the beach, spending time with family and friends, and playing with her two golden retrievers … Undecided as to her collegiate major.