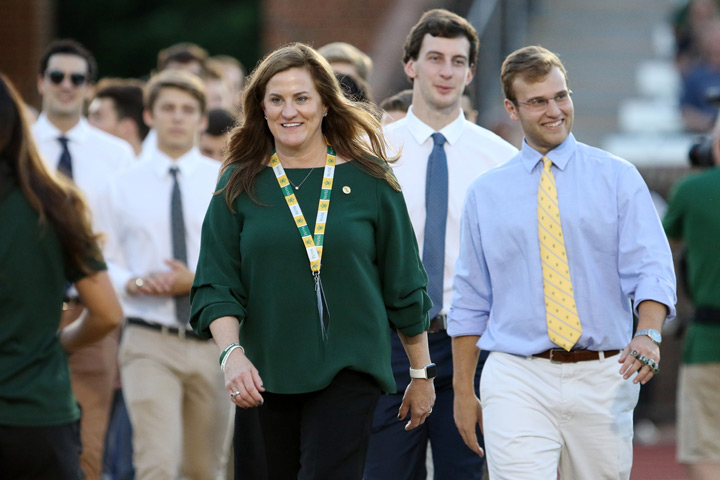 William & Mary athletics director Samantha Huge has admitted that she plagiarized portions of the school’s announcement that it was cutting swimming & diving, among other athletics programs.

Earlier this month, William & Mary announced that it would be cutting 7 of its athletics programs, including men’s and women’s swimming & diving, men’s and women’s gymnastics, men’s indoor and outdoor track & field, and women’s volleyball. In that announcement, several sentences were taken verbatim from an announcement made by Stanford that they were cutting 11 sports in July.

The images below highlight the parallels between William & Mary’s statement and Stanford’s. Dr. Cam Shriver, a former member of the school’s men’s track & field team, prepared these documents highlighting the similarities. The original William & Mary letter, which can be read here, is signed by Huge, William & Mary President Katherine Rowe, and William & Mary Provost Peggy Agouris.

As part of her acknowledgement, Huge says that she “consulted with professional colleagues and peers at several institutions, including Stanford University.”

Huge acknowledges that she did not take enough care with publishing the information, and promises “more transparency.” That promise for transparency comes as William & Mary has still not provided documents requested by SwimSwam as part of an FOIA request.

As the leader of William & Mary Athletics, I affirm that the department’s and university’s integrity is paramount. I acknowledge the concerns raised by some members of the W&M community regarding the athletics communications on September 3, specifically the similarities to those of other institutions.

As we prepared to announce the very difficult decision to eliminate seven varsity programs, we consulted with professional colleagues and peers at several institutions, including Stanford University. We were seeking to engage a thoughtful process, then communicate those actions as respectfully as possible. Our goal was to emulate best practices, not imitate. We clearly fell short of the William & Mary community’s standards. Upon reflection, we should have taken more care with the review of the materials we shared with our community. At the end of the day, regardless of the drafting process, I take responsibility and we will do better. Above all, the goal was to convey respect to those most directly affected. I regret very much that we did not meet that goal.

In the coming weeks we will share, with more transparency, our process and the data that led us to our decision regarding Division I athletics.

William & Mary requires students to agree to an ‘honor code’ that reads:”As a Member of the William & Mary community I pledge, on my Honor, not to lie, cheat, or steal in either my academic or personal life.”

The school claims that its is the oldest student honor code in the nation, with documented roots back to at least 1736. The student handbook further defines ‘cheating’ to include ‘plagiarism.’

Meanwhile, as a group of organized William & Mary swimming & diving alumni have collected over $1 million in pledges, in addition to the existing $3 million endowment, Huge and the William & Mary administration have continued to reject any effort to save the program.

We are not talking a history paper here. The real story is at the very end which are the efforts to save the program which should be the focus.

“Meanwhile, as a group of organized William & Mary swimming & diving alumni have collected over $1 million in pledges, in addition to the existing $3 million endowment, Huge and the William & Mary administration have continued to reject any effort to save the program.”

In other words, like the University of Iowa, even if fully funded by endowment and outside money – with zero school outlay of funds required – William & Mary simply doesn’t want these athletes around. Got it.

SHAMEFUL. Like the University of Iowa, these athletes have been deemed not worthy.

So if a student plagiarized, that student would be held accountable for their actions especially given William and Mary’s “code of honor”. Samantha Huge needs to be held accountable for her actions regardless of her excuses. Does William and Mary want to be represented by her plagiarizing or by a reputable swim team? Tough choice especially when the team has managed to raise so much money.

She is also getting slack – if you find her FB they day of the cut she posted herself relaxing in a hammock with no care in the world. Pretty tasteless if you ask me! Completely out of touch, clueless and piss poor management. How she still has a job is beyond me. She has a horrible reputation in our community and the athletes cannot stand her oversight.

So sad to hear such swimming tradition go.
Never thought. I would read Stanford dropping the swimming program.
All Stanford swimming keep swimming, keep your spirit up.
Never give up.

Worked for the Stanford AD at Delaware. There’s your connection.

It’s becoming more clear what the real problem is here.