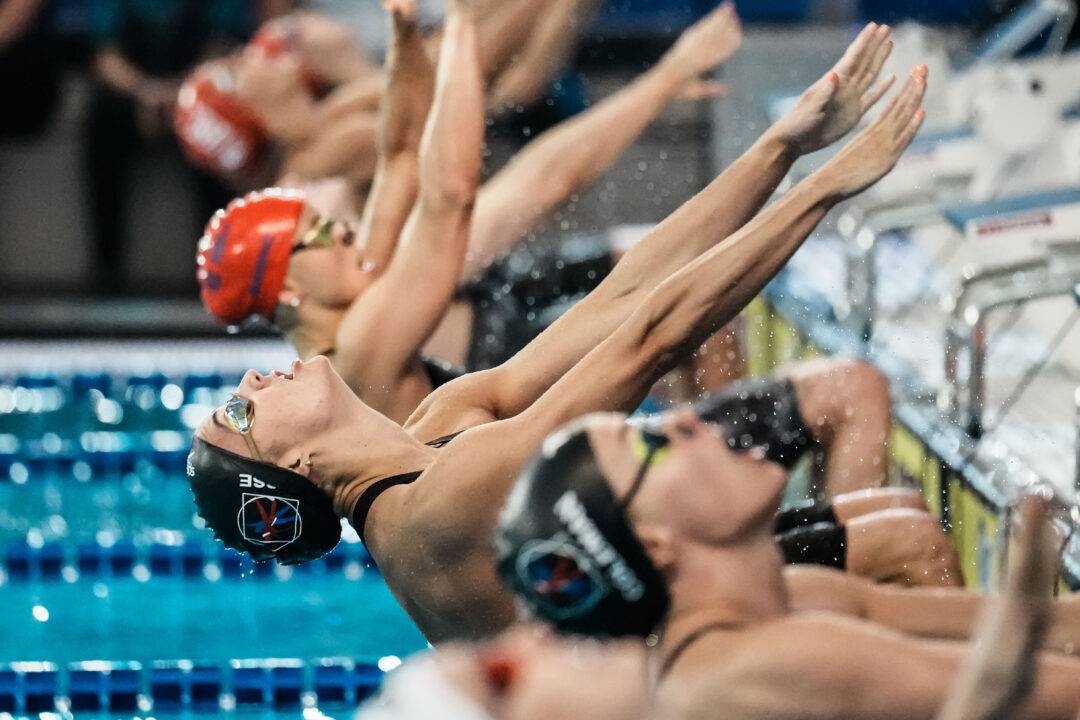 the Condors earned 88 points from both skins events to the Titans’ mere 16.5 points from the skins, giving Cali the 51.5-point winning margin over Toronto. Current photo via Mike Lewis/Ola Vista Photography

Toronto’s Razzetti and Max Litchfield gave the Titans one more point surge with a combined 27-point pick-up thanks to their check-point bonus points. The Condors were only able to score five points in the event. This put Toronto into the lead by 20 points. Despite matching Cali’s event wins, the skins ultimately decided Cali as match seven winner.

The Condors soared with Nelson and Dahlia as the duo swept all three women’s 50 fly skins rounds and scored 53 points. Meanwhile, Louise Hansson tied for fifth place in the quarter-final before being knocked out of the semi-final. Teammate Michelle Coleman placed eighth in the quarter-final, totaling the Titans’ event score total of 11.5 points.

Toronto had one last shot to snag extra points in the men’s 50 back skins, but saw a 5-8 finish from Shane Ryan and Cole Pratt, managing five points. Meanwhile, Condor Stewart placed second in the final while teammate Ress finished third in the semi-final after going 2-3 in the quarter-final, scoring 35 points total.

At the end of the skins, the Condors earned 88 points from both skins events to the Titans’ mere 16.5 points from the skins, giving Cali the 51.5-point winning margin over Toronto.

Almost certainly. Unless something comes unstuck with some of their prime assets, the quality gap between CAC/ENS/LON/TOR and the next best is considerable unless LAC gets a very favourable semis draw plus raise theor overall game exponentially.

Regrettably, their relative lack of skins weapons will count heavily against them and mitigate against them contending for the title. Fourth looks the most likely finish unless LON fails to bring back the likes of Peaty, Dean and/or Prigoda,

Could you write an article on the swimmers who ‘aren’t showing up’?