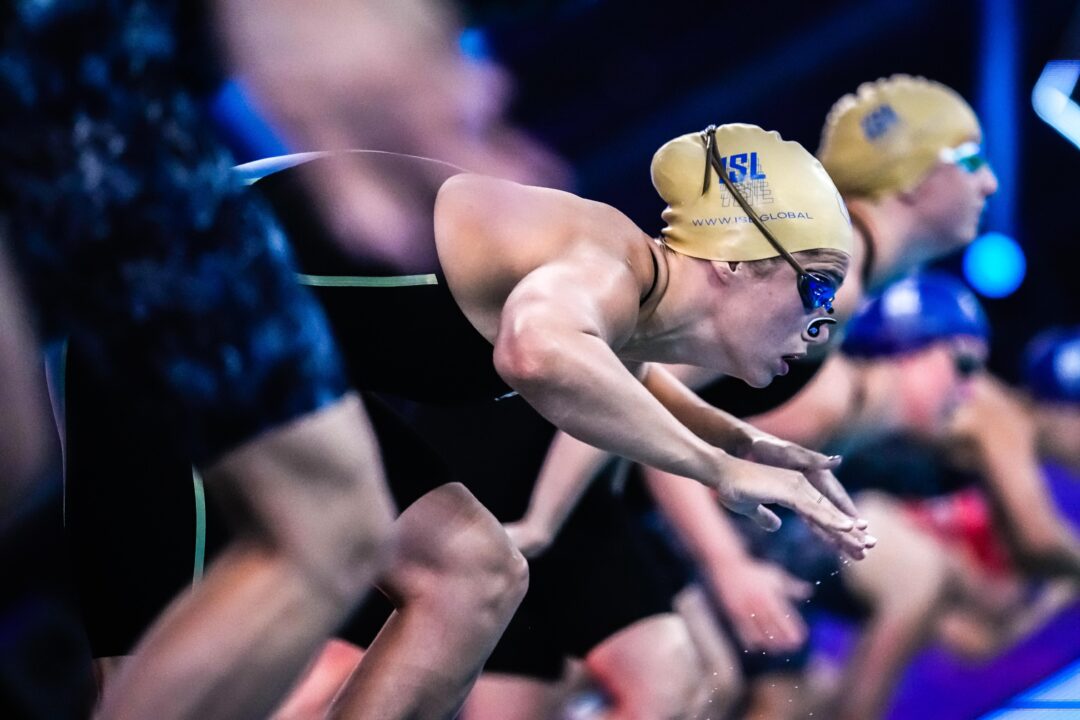 Match 7 of the 2021 regular season of the International Swimming League will be the final time the Cali Condors race in Naples as it is their 4th appearance. Current photo via Mike Lewis/Ola Vista Photography

Match 7 of the 2021 regular season of the International Swimming League will be the final time fans see the Cali Condors race in Naples as it is (already) their 4th appearance. The Condors will have a tough battle with the Toronto Titans who are fresh off their first-ever ISL team victory in Match 5. Iron and the New York Breakers are also strong in certain areas and will clamor for 3rd place.

Toronto’s Louise Hansson held on for the win over Kelsi Dahlia of the Cali Condors, touching 55.42 to 55.54. Hansson’s swim steals the points from teammate Laura Stephens and Iron’s Alys Thomas, giving Toronto 12 points. The Condors will equal that though with a 2nd-place finish from Dahlia and a 4th-place finish from Erika Brown.

No jackpot but Marius Kusch gets another win for the Titans in the men’s 100 fly. New York’s Matt Temple and Jakub Majerski have good swims to place 2nd and 5th, respectively, giving the Breakers 11 points to match Toronto, which also pulls in 11 points. The Cali Condors earn just 8 points in this race while Iron earns just 7 points.

Despite an early issue with the backstroke wedge that delayed the start of the race by about a minute, Beata Nelson gets a huge jackpot win and brings in 19 points for the Cali Condors, however, teammate Kathrin Demler failed to make the time standard so Cali is deducted a point, giving the Condors 18 overall. Toronto’s Lisa Bratton and Kylie Masse place 2nd and 3rd giving the Titans 13 points while Daryna Zevina from the Brekers places 4th for 5 points. Iron gets zero points in this race.

Coleman Stewart produces a very fast final 50 to surge ahead of early-leader Cole Pratt of the Toronto Titans and get the win in 1:50.98. Pratt places 2nd while his teammate Jay Lelliot places 5th giving the Titans 11 points overall, 1 more than the Condors who place 1st and 8th. Iron picks up a much-needed 11 points while the Breakers earn a mere 5 points.

Lilly King gets the win for the Cali Condors with a 15-point jackpot, but New York picks up a vital 13 points with 2nd- and 3rd-place finishes from Molly Renshaw and Abbie Wood. Molly Hannis of the Condors fails to meet the minimum time standard and is deducted a point. Toronto earns just 5 points while Iron gets only 4 points in the women’s 200 breaststroke.

Toronto’s Anton McKee looked like he was going to get his first victory of the season but couldn’t hold on in the final 50 meters and ended up fading to 4th. Erik Persson gives Iron their first win of the session in the men’s 200 breaststroke and steals a point from the Breakers, earning 10 points. Iron teammate Bernhard Reitshammer places 7th giving Iron a total of 12 points in the race. The Cali Condors place 2nd and 6th for 10 points total while Toronto hauls in 9 points.

The Toronto Titans get a huge 30-point jackpot win in the first relay of the match, stealing the points from their second team as well as squads from New York and Iron. Both Cali Condors relays scored to give the Condors 22 points total. Iron comes away with just 12 points and New York only 10 points.

Justin Ress gets a narrow victory over Iron’s Thom de Boer, an Olympic finalist in the 50 free. Cali’s Jesse Puts places 3rd to give the ‘Dors a total of 5 points while Iron will bring in 11. The Toronto Titans slide back a bit with only 6 points while the Breakers earn just 5 points.

Kasia Wasick and Michelle Coleman bring the Titans a huge 26 points with a 1-2 finish. For Wasick it is a massive 19-point jackpot, stealing all of the points from both Breakers swimmers, as well as points from Iron and Cali. Overall, Iron gets just 6 points while Cali gets just 5 points.

Finlay Knox pulls off the win in the men’s 200 IM as teammate Alberto Razzetti places 3rd to give the Titans 16 points. This is Cali’s worst showing of the day, netting just 3 points. The Breakers and Iron remain locked in the battle for 3rd as each earns 9 points.

Despite an early lead by Cali’s Beata Nelson, New York’s Abbie Wood picked it up in the middle 100 to win the race, 2:05.08 to 2:05.82. Wood’s swim was a big one for New York as she gets a 15-point jackpot and steals points from both Cali and Iron, as well as her teammate Marrit Steenbergen. Toronto earns 9 points while Iron and Cali earn just 6 points and 7 points, respectively. All in all, Wood’s success turns out to be a win for the Toronto Titans as well since it prevents the Condor from getting a major point haul.

Lilly King and Molly Hannis place 1-3 in the women’s 50 breast, giving the Condors a total of 21 points thanks to King’s 15-point jackpot. Toronto’s Kelsey Wog is deducted a point for failing to make the time standard, while Iron’s Jenna Strauch and New York’s Molly Renshaw see their points stolen. Iron earns 7 points thanks to a 2nd-place finish from Ida Hulkko while Toronto gets just 5 points and New York just 4 points.

New York’s Alicja Tchorz pulls an upset from lane 7 to win the women’s 50 backstroke in 26.38, getting her hand on the wall 0.07 ahead of Toronto’s Kylie Masse. Cali finishes 3rd and 4th for a total of 11 points though Toronto comes away with 11 as well. Iron gets only 3 points, a major detriment to their fight for 3rd with New York.

Coleman Stewart gets a 12-point win in the men’s 50 backstroke, though Cali is also deducted a point for Brodie Williams failing to meet the time standard. Iron places 2nd and 3rd for a total of 13 points while Toronto does not fare so well, earning just 5 points. New York, meanwhile, gets 7 points.

The Toronto Titans did exactly what they needed to in order to distance themselves from the Cali Condors. Toronto’s Julia Hessler gets the win while teammate Kaersten Meitz placed 4th. Similarly, Iron went from 1 point under New York to 21 points ahead of New York thanks to 2nd- and 3rd-place finishes by Barbora Seemanova and Veronika Andrusenko. Neither Breakers swimmer met the minimum time standard meaning the Breakers are deducted 2 points total. Cali gets 9 points on the board, which is about as good as they could have hoped for in this race.

Brendon Smith gave the New York Breakers a huge swing in momentum with a 15-point win in the men’s 400 freestyle. Iron, who was so strong in the women’s 400 freestyle, gets 7th and 8th here with each swimmer failing to make the minimum time standard, meaning Iron is deducted 2 points. Toronto places 2nd and 3rd for 21 points total while Cali pulls in 14 points, a solid showing for them in one of their weakest events.

Once again, Iron and New York are only separated by 1 point.

The Cali Condors dominated the women’s medley relay earning 30 points total. Toronto earns a total of 22 points while Iron gets just 12 and New York just 10 points. Beata Nelson got the better of Kylie Masse as the backstroke lead-off, posting a 56.62 to Masse’s 56.91. Toronto’s Louise Hansson split a 55.28 in the butterfly on the Titans’ 2nd-place relay, while Kayla Sanchez put up a 51.82 freestyle split on Toronto’s 5th-place ‘B’ relay.

The Cali Condors have earned the right to pick the stroke for the 50 skins race on day 2, though Iron and Toronto will each get to eliminate a stroke first.

Despite not having Caeleb Dressel to swim butterfly, the Cali Condors still dominated the men’s 4 x 100 medley relay, jackpotting 3 other teams including one of their own. Iron did well to score both of its relays, netting 20 points.

The Cali Condors have again earned the right to pick the stroke for the 50 skins race on day 2, though Toronto and Iron will each get to eliminate a stroke first.

Butterfly for women, backstroke for men.

damn what happened to hannis in the 200

I think Lochte would add more star power to the league, and I think he would be great in this team format, but I’d rather see ISL stick to their no-tolerance PED policy. Maybe make an exception for someone who just tested positive for THC.

Lochte didn’t test positive foe THC or anything else. He did a vitamen IV promo on insta but he’s so dumb he didn’t know IVs are banned by WADA even if you are only having vitamins. He uploaded the photo and busted himself.

Vitamins are PEDs? It’s the method of intake WADA and ISL dislike, and they wouldn’t have any more effect on performance that the preworkout powder taken by many, or smelling salts, which also are technically allowed. Smart recovery and enhancing through anabolics are too different things. Totally agree on the THC, but that’s 100% political, and worldwide it’ll never be allowed

Fostah to nic fink: “50 is not really your event”

why didnt he swim the MMR in tokyo?!! still couldnt get over it

Abbie Wood should be DISQUALIFIED!