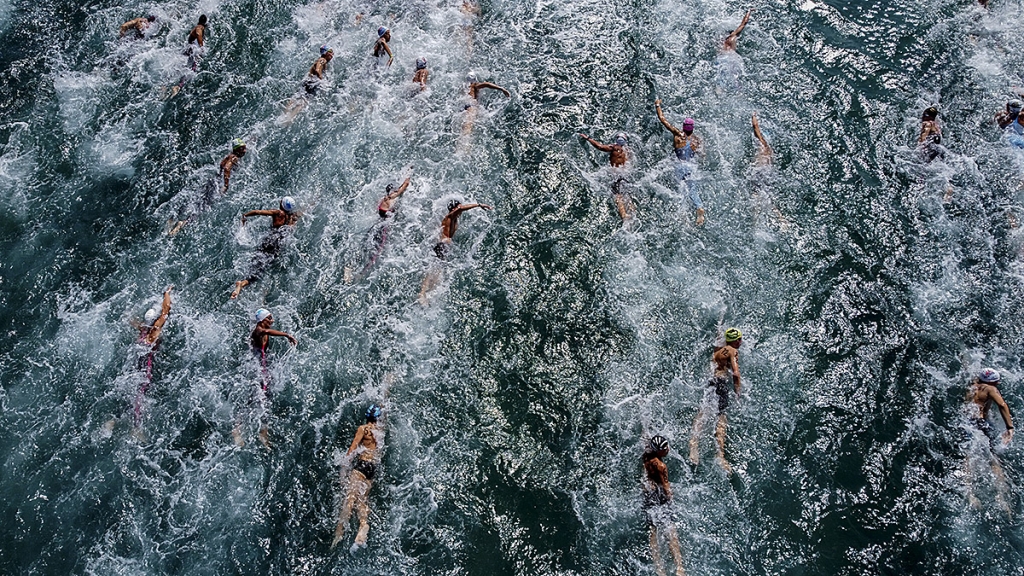 More than 75 participants, from as far as Canada and San Francisco, 5 other states, and as close as across the lake, gathered for the swim and paddle events Current photo via Andrea Masini Deep blue media

The Inaugural Wild Bill Swim & Paddle Challenge was a success in every aspect. More than 75 participants, from as far as Canada and San Francisco, 5 other states, and as close as across the lake, gathered for the swim and paddle events, surpassing planners’ ambitious goal of 50 swimmers.

“We really just wanted to plan something for ‘fun, fitness and philanthropy,’” said Jenn Yorzyk Triger, Yorzyk’s daughter and event organizer. “But this is so beyond what we could have ever hoped for — just the fun alone would have been enough!”

Yorzyk, who lived on Quacumquasit Lake, passed away two years ago at 87. He broke World Records, including when he won the Gold Medal in the 1956 Olympics butterfly event, just seven years after he started swimming.

The majority of the Swim & Paddle Challenge swimmers were one-mile swimmers, about a third took on the three-mile swim, and a handful chose the 400-yard “novelty swim.”

Meanwhile, the beach offered its share of fun. Spectators and volunteers cheered swimmers on throughout the one-mile loop course that started and ended at the beach between Quaboag (North Pond) and Quacumquasit (South Pond), where there was face painting, glitter tattoos, a jazz ensemble of young lake residents, a raffle with big prizes, and treats provided by Epic Pastries.

The day’s finale was the “Vintage Bathing Beauty & Blokes Pageant” on the beach, which saw seven men and women participants and even attracted two walk-up competitors.

The first- and second-place victories in the three-mile race had special meaning: First Place was Dan Moran, who was a butterflyer at Springfield College, where Yorzyk attended and mentored, and where Yorzyk’s Gold Medal is displayed. Moran watched many videos of Yorzyk as part of his training.

Second was Lucas Triger, Yorzyk’s 17-year-old grandson, who is a competitive swimmer in his own right and was the youngest swimmer among the one- and three-milers.

The first woman out of the water in the one-mile swim was a veteran who arrived from New Hampshire with her two service dogs — who did not lack attention or treats while she swam!

The oldest swimmer, 80, finished the one-mile event swimmingly; the youngest swimmer who was, exactly, 9-1/4, competed in the Novelty Swim, with a noodle, and swam next to his dad, who had just finished the 3-mile swim. One dedicated triathlete swam the 1-mile butterfly in honor of Wild Bill’s contribution to the stroke.

Proceeds from this inaugural event is funding a matching grant for a clean-water innovative phosphorous treatment for North and South Ponds, spearheaded by the Quaboag Quacumquasit Lake Association that Yorzyk and his wife, Carrol, have long been active in.

In addition to the swimmers, there were more than 35 volunteers, which helped provide 10 paddlers on the water accompanied by four certified Life Guards, the Brookfield Fire Department EMT boat, and five pontoon boats supported by the Sturbridge Police Department.

Plans are already underway for the Second Annual Wild Bill Swim & Paddle Challenge. While a portion of fundraising will always go back into the clean waters of North & South Pond, the mission and fundraising will extend to teaching 3rd-graders in the surrounding communities how to swim. Yorzyk Triger is looking for a way to get this done through the schools, is already working with the aquatics director at the Southbridge YMCA, and has garnered support from
State Senator Anne Gobi.

“They all allowed my vision to become reality, I was grateful every step of the way in planning this event.” Yorzyk Triger said. “And finally, with love, I want to thank, so much, the location host — the QQLA members and lake residents.”

Follow us on IG and FB. @WILDBILLSWIM for news , weekly open water swim tips for winter training, photos and updates! Check out the youtube channel Wild Bill Swim, for interviews full of tips.

Visit the website www.wildbillswim.org for more information, photos and results.