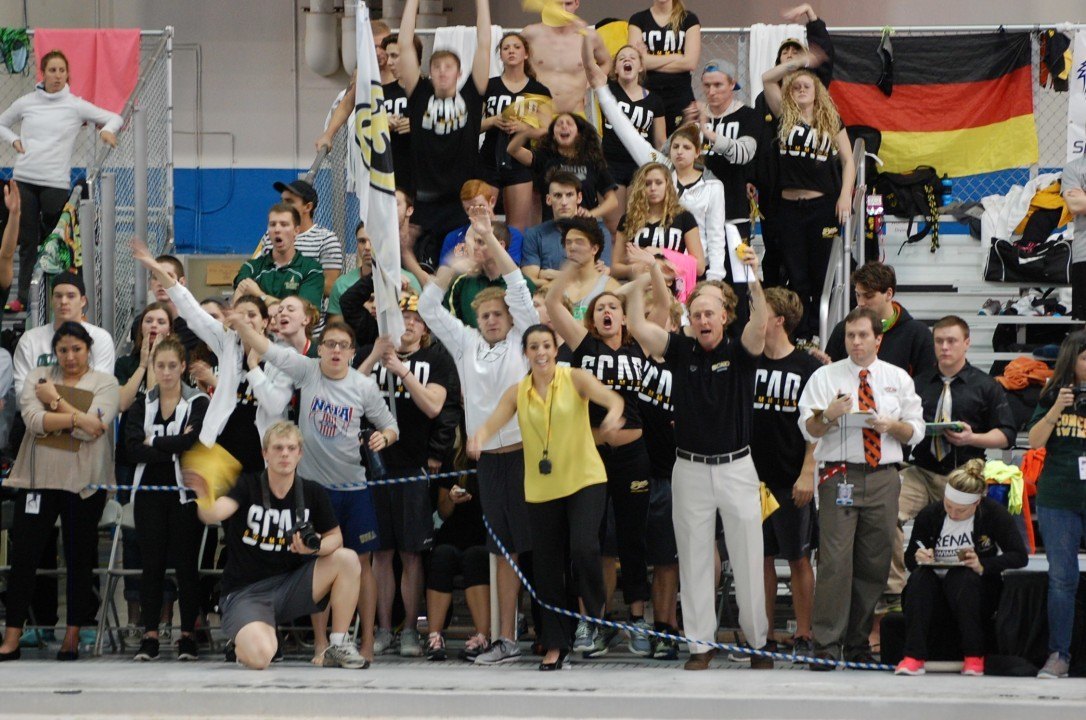 The colleges of the NAIA offer diverse opportunities for swimmers. Archive photo via Anne Lepesant

When high school swimmers start to consider their options for swimming in college, they often see their choice as one between NCAA Division I, NCAA Division II, NCAA Division III, and NJCAA programs. However, the 30 colleges of the National Association of Intercollegiate Athletics (NAIA) that have swim teams offer a valuable and unique opportunity for student-athletes.

The NAIA is an organization that governs athletic programs of many small colleges located across the U.S. It is a separate body from the NCAA, and each year every sport hosts its own national championships. Most of the colleges in the NAIA are private liberal arts colleges.

Chris Conlon, head coach of the Savannah College of Art and Design (SCAD) men’s and women’s swim teams, thinks that more high school swimmers should look into swimming in the NAIA.

“At the NAIA level, there is a tremendous opportunity for collegiate swimmers that not enough people know about,” he said, “The schools in the NAIA are diverse in their size, location, and academic focus.”

Conlon’s program is one of the top NAIA performers in the nation, with SCAD’s women finishing second and their men finishing third at this year’s NAIA Championships in Oklahoma City. He thinks that one of the main advantages to swimming in the NAIA is the greater opportunity for swimmers to go to the national meet.

“I’ve coached both [NCAA and NAIA programs], and I really like the way our season finishes up for our team,” he said. “At the NCAA level oftentimes you’re forced to do your best at conference. For our team, swimming in the NAIA allows us to build throughout the season and peak at the national meet.”

While NAIA swimming often gets compared to NCAA Division III in terms of speed, oftentimes, the top swimmers at NAIA Championships have fast enough times to qualify for Division I Championships, so the competition is heavy. In addition, NAIA swimmers often compete against a range of teams during the season.

“In NAIA there is a wide variety of schools with tremendous academic and competitive opportunites,” said Conlon, “For instance, we look at NAIA Nationals as the culmination of the season, but during the season our competition includes programs from all divisions. The flexibility to do that is a great asset.”

Another huge advantage is the NAIA’s ability to offer students athletic scholarships. John Reynders, president of Morningside College in Sioux City, Iowa and member of the executive committee of the NAIA Council of Presidents, finds that their ability to grant athletic-based financial aid can give NAIA schools the edge over NCAA Division III schools.

“I believe that a school like Morningside [which finished 16th on the men’s side and 20th on the men’s side at this year’s swimming championships] has a big advantage in being able to use financial aid as a recruiting tool,” he said. “The NAIA’s financial aid system allows us to recognize the importance of giving young people a chance to continue their passion. Division III schools can’t use that advantage.”

While the NCAA is often criticized for tight regulations on student athletes, coaches, and recruits, the NAIA has fewer regulations. Both Reynders and Conlon agree that the NAIA’s looser regulations end up benefitting the student-athlete. For example, in the NAIA, coaches are able to interact with their swimmers year-round, which allows for more in-depth off-season and pre-season training.

“The way our rules are set up are very focused on common sense, and they allow me to do what’s best for my program,” said Conlon. “They seem to be fair and equitable and work well.”

One of the most important advantages to swimming in NAIA is the Champions of Character program, which emphasizes creating a whole person, rather than just an exceptional athlete.

“The Champions of Character program is a really strong one because everything goes hand in hand,” said Conlon. “It’s important that we focus on more than athletic prowess. We’re also thinking about who the athletes become, not just what they accomplish.”

Between the ability to offer scholarships, looser regulations, and more opportunities to swim at the national meet, high schoolers looking to swim in college should definitely take a look at the schools of the NAIA.

For a list of NAIA member institutions that offer men’s swimming side click here, and click here for a list of those that offer women’s swimming. Look here to see the results from this year’s NAIA National Championships. For more information about the NAIA and its Champions of Character program visit its home website.