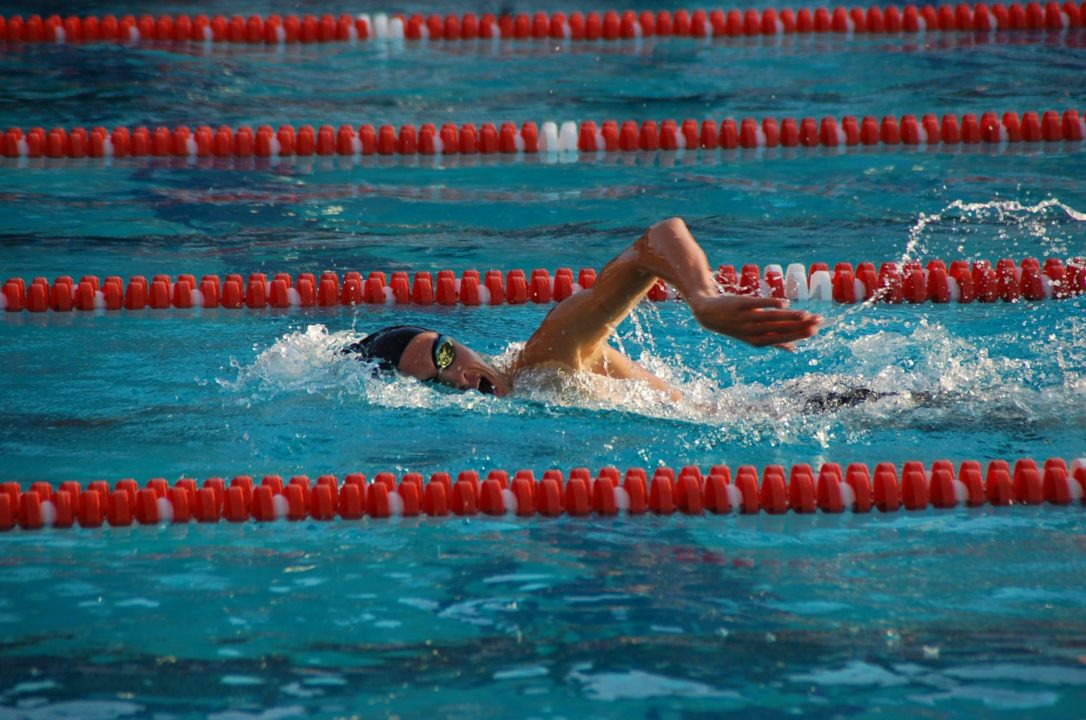 Logan Hotchkiss of Malibu won both the 200 and 500 free last year and is looking to repeat the double this time around. Archive photo via Anne Lepesant

In 2014 Cerritos girls crushed the competition, winning by 127 points over Orcutt Academy and by 235 over Garden Grove. The Cerritos boys won handily as well, racking up an 82-point margin over Citrus Valley, who eked out second place over Temescal Canyon by 6 points.

While Cerritos is expected to dominate the girls’ side of the meet again this year, the boys’ race should be a very close battle. Scoring out the psych sheet, we see Malibu with the potential to take the team title, while Rowland and Beaumont could upset things at the top if they manage to get a few extra bodies into “A” finals.

The sprint races in the girls’ meet will feature Santa Clarita Christian’s Victoria Kirshner (25.25/54.80), Lezly Plahn of Foothill Technology (25.45/56.16), and Roxanna Yu of Cerritos (54.98), amongst others, while the top seeds in the 200/500 arena are Lily Armstrong, a freshman from Foothill Technology, Courtney Gray of Beaumont, and Kennedy Callaway of Marshall.

In the boys’ meet, senior Andrew Phan of Rowland (21.32) comes in seeded just off the D4 record in the 50, while classmate Michael Wang is entered with 45.73, a half-second under the D4 mark. Wang is 3.4 seconds faster than the next qualifiers. Malibu senior Logan Hotchkiss should dominate the distance freestyle events; his 200 entry time is almost four seconds faster than number two-seed Wang (Hotchkiss and Wang have both committed to UCSB for next year). In the 500, Hotchkiss is expected to be pushed by Malibu classmate Alec Wilimovsky. Hotchkiss and Wilimovsky went 1-2 in the 200 and 1-3 in the 500 last year.

Zoomer Otazu, a junior at Maranatha, is the top seed in the girls’ 100 back with 57.30. La Reina senior Abby Chopp is entered with 59.97. After breaking the D4 records in the 200 IM and 500 free last year, Cerritos senior Kiri Harvey is turning her attention to other events this year, and is entered with the ninth fastest time in the 100 back.

2014 runner-up, Cerritos senior Angel Alcala, leads the boys’ qualifiers with 51.08, a mere .3 off the D4 record. The second seed is Josh Modglin, a freshman from Foothill Technology (54.45).

La Salle junior Jacqueline Torrez is the top seed in the girls’ 100 breast by 3.4 seconds with her 1:06.71. Cerritos senior Yu, a 2014 “A” finalist, and Sara Wilson of Buckley will hope to challenge Torrez.

Edgar Chin of Fairmont Prep, the runner-up in last year’s final, is entered with the top time in the boys’ 100 breast. Chin’s 57.51 is about 2.5 seconds faster than his time from last year and .65 off the meet record.

Cerritos senior Harvey is the top seed by a half-second in the girls’ 100 fly with 59.23. Teammate Maya Valdoria and Saskia Wong-Smith, a freshman from Archer School for Girls, will challenge Harvey for the title.

Defending champion Alcala of Cerritos is entered with 50.02, a half-second under the D4 meet record. Rowland’s Phan is seeded second with 51.34.

Torrez (La Salle), Chopp (La Reina), and Otazu (Maranatha) are the leading qualifiers in the 200 IM on the girls’ side.