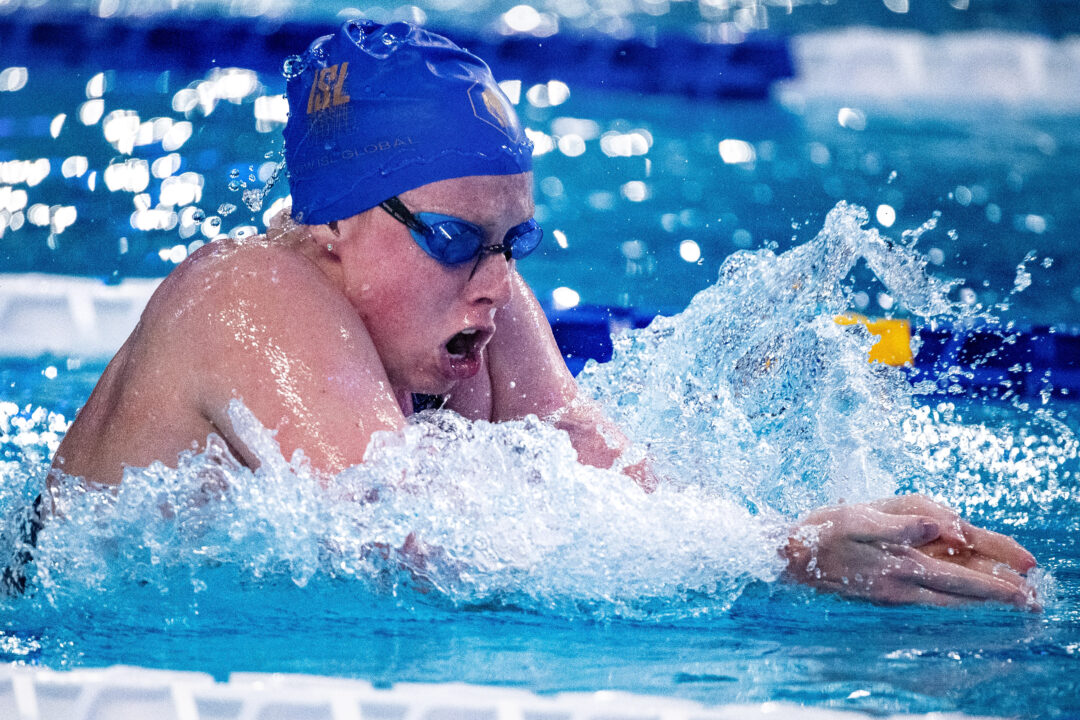 Did Lilly King have a non-simultaneous touch on the women's 400 medley relay? The available video evidence is inconclusive. Archive photo via Giorgio Scala / Deepbluemedia / Insidefoto

The replay of match day 1 of the 2021 International Swimming League grand finale is up.

On a day of big swims from the likes of Nic Fink and Kelsi Dahlia, a disqualification of the Cali Condors’ women’s 400 medley relay at the end of the session halted the momentum for the defending champions.

The call was a non-simultaneous touch for breaststroker Lilly King on the 3rd turn of her leg of the medley relay.

While the ISL does have an underwater camera for the livestream, on the replay, only one view is available – an overhead view.

A few things to point out:

Watch the turn below. King is on the left side of the screen, in the lead.

Note: there has been some conversation that Bernie Guenther might have said “long turn” and been referring to Beata Nelson on the original broadcast discussing the disqualification. Upon rewatch, Guenther says “wrong turn” and clearly refers to King, not Nelson. That is then backed up in the post-match show, where Guenther, Rowdy Gaines, and Mark Foster spend a few minutes clearly watching King’s turn and analyzing that they couldn’t see an issue.

The Condors easily touched the wall first, and the disqualification meant a 50 point swing at the top of the table.

As a former official and current coach, I know the following things. 1. The swimmers wake at the wall causes a distortion in the water making it hard to see clearly what is happening in the blink of an eye. 2. The benefit of the doubt always goes to the swimmer. It clearly looks like a clean touch to me.

If there is this much discussion on a turn (and I haven’t seen many say it was clearly a DQ), then the call was the wrong call.

1. If you slow all swimmers down to a certain point, none of them will be 100% simultaneous. Lilly’s turn appears simultaneous at normal speed so I wonder how the official made this call? There also seems to be a consensus, even with the slowed down video, that this turn was legal. Very sus.

2. Why was only Beata’s first 50 split recorded on Omega? Shouldnt it be the first 150 of the relay until this turn? Kinda sus if you ask me.

ISL posted the underwater video on Instagram. Still looks like a legal touch to me but I’m not a judge.

Me Before Day 1: Don’t know which team to support
Me After Day 1: GO DORSSS

I am still having a hard time trying to figure out how that was an illegal touch. This call was quite unfair to the Cali Condors. I just hope they perform good enough tonight to compensate for this ridiculous loss.

I love the comments by some of the Condors + that of Annie Lazor…
Last years drama was Coleman vs Ryan , this year it’s this

I don’t know all the rules but clearly if you slow it down, she touches with her left hand and pushes it of immediately, so I believe the DQ was wrong?

I feel like this could be solved with some added tech in the touchpads. I think it’d be used as double check after a call is made, like they do with relay starts. It could also give you a time standard range determine what “simultaneous” means.

If only the actual touchpad technology were really that good.

It’s definitely doable, the physical configuration is actually fairly simple, but I think the amount of extra engineering involved in that would make these timing systems stupidly expensive and harder to maintain. Probably not a great investment for the manufacturers to develop it when really only a few pools would shell out that kind of money.

Not sure what the exact hardware of current touchpads are. My guess is that the whole pad is one big strain gauge that detects any deflection of the pad, but it could be a bunch of small pressure sensors. If it’s a bunch of sensors, then you’ve mostly got what you need physically, you just need to make every single one report back individually… Read more »

What if this is just a grand ploy to bring more drama/views to the finale? That this was preordained?

Maybe, but it might have the other outcome, people lose trust and interest?

The results on screen show LA’s top relay ahead of Cali’s B, but official results show it correctly.