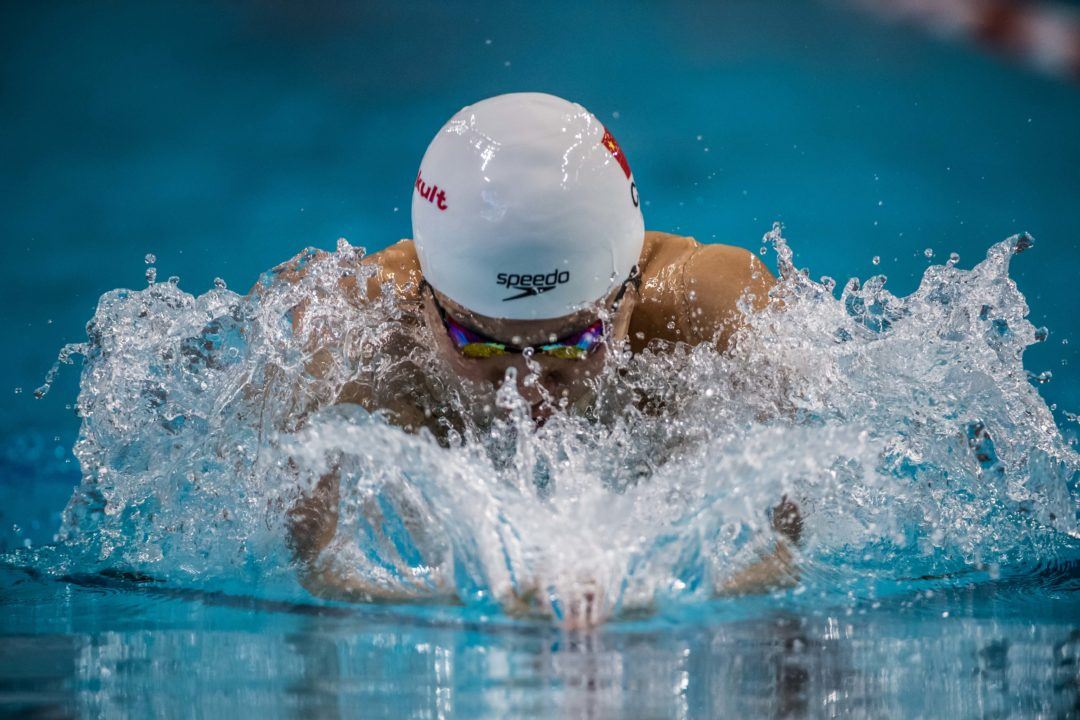 Yan Zibei came within .04 of his own Chinese National Record tonight, but still has tomorrow's final to make it happen. Archive photo via Mike Lewis/Ola Vista Photography

The women’s 400m free final saw Wang Jianjiahe soar to the top of the podium, producing a quick time of 4:03.77 to win by over a second. Runner-up came in the form of reigning national record holder Li Bingjie, who clocked a solid time of 4:05.08, while Dong Jie rounded out the top 3 in 4:07.09.

For Wang, the 16-year-old recently punched a new Chinese and Asian Record in the 1500m freestyle while competing at the Pro Swim Series in Des Moines. In this 400m free event, Wang has already been as fast as 4:05.28 at that same meet, but was able to slice off more than a second to put up her fastest time of the season and move up the world rankings to #3.

The remaining events this evening were in the form of semi-finals, setting up some highly anticipated finals for tomorrow night. The women’s 100m fly will see leader Zhang Yufei try to hold on to her position for a gold medal, as she leads the women in 57.63, the only sub-58 second outing of the field thus far.

Zhang took Asian Games silver in a mark of 57.40, so she’s already within striking distance of her season-best effort. Behind her is Wang Yichun, who holds the 2nd fastest seeded time in 58.32, while Lin Xintong is still very much in the mix with a 59.37.

Tonight, Zibei punched a time of 58.96 to lead all swimmers, as well as enter the world rankings at #3, behind Adam Peaty and Belarus’ Ilya Shymanovich.

Hong Jinquan, who celebrated his 16th birthday earlier in this month, posted a 49.22 split in 400 free relay after his individual 400 free double! He competed in YOG last year.