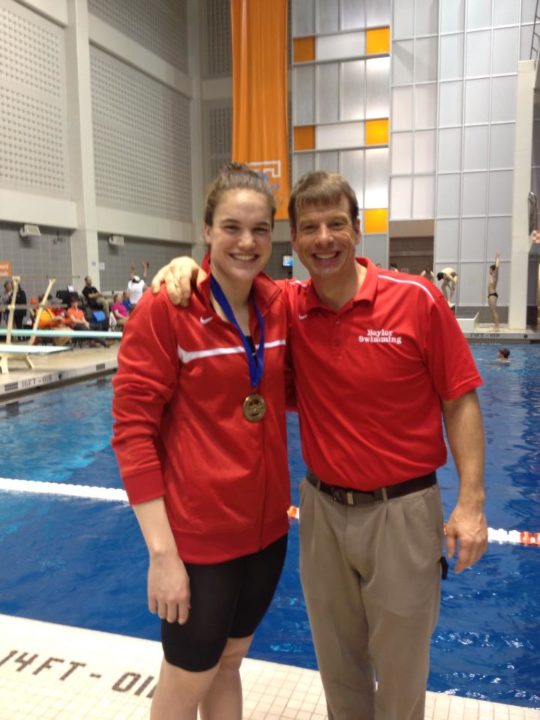 Kristen Vredeveld and Dan Flack were named swimmer and coach of the meet at the Tennessee High School State Championships. 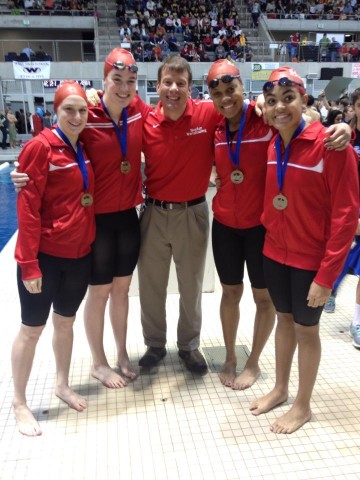 The Tennessee High School State Championship meet is a very unique one. It is truly a meet “of the people, for the people, by the people,” as the TSSAA, the official governing body of secondary sports, doesn’t recognize swimming. So, instead, high school swimming is run by the Tennessee Interscholastic Swim Coaches Association. That’s not the only reason this league is unique. Many states split up their state championship into two days, but this meet, hosted in Knoxville by the Pilot Aquatic Club, makes their split a bit differently.

Friday’s events ran prelims and finals through the 100 fly, and then Saturday started anew with prelims and finals of the 100 freestyle onward. That left an opportunity for a double that many swimmers would probably like to attempt, but isn’t feasible in a normal high school meet: the 100 free and 100 fly; at this meet, Mt. Juliet sophomore Carrie Johnson pulled that off most successfully with a victory in the 100 fly on Friday (54.62) and a third-place finish in the 100 free to begin Saturday (51.88).

The winner of that 100 free was the star of this women’s meet, Cal-bound senior Kristen Vredeveld. She has been a stalwort of the Baylor School for the last four years of State and National Record breaking, state title winning streak of triumph in Chattanooga, Tennessee. What better way to end her high school career with two individual victories, two relay wins, and a 7th-straight team State Championship.

As mentioned, Vredeveld’s first victory came in the 100 freestyle, where she swam a 49.57. That made her the only swimmer to dip under 50 seconds in the race. The runner-up, Sophie Pilkinton, looks to be the face of Tennessee sprinting for the future, as the Harpeth Hall sophomore knocked a second off of her best time with a 50.88 for 2nd-place.

The Harpeth Hall program also has a great sprint group, for Pilkinton to train with. She and her Harpeth Hall teammates won the 400 free relay in 3:30.45, besting the runners-up from Baylor in 3:31.40. Last season, Baylor swept the relays, but that was with Vredeveld swimming all three of them and just one individual. This year, they tweaked their strategy and she went with a more traditional two individuals and two relays.

Her other event this year, and victory, came in the 50 free where she was a 22.91. Pilkinton took a silver-medal in this race for the second-straight year (both times behind a senior) in 23.53.

Among other non-Baylor winners was another Harpeth Hall swimmer: Elizabeth Stinson. She won the 500 free in 4:50.03. Christ Presbyterian freshman Tatum Wade had a very good swim for 2nd in 4:52.55; she and Stinson paced their race almost identically, but Stinson was just a smidge faster on each 50.

While many women’s teams this year around the country, it seems, have won state titles on the back of young freshmen and sophomores, the striking thing about the program at Baylor is that they always have experience. That veteran presence is how they stay so consistently good for so long. They kicked off the meet with a win in the 200 medley relay in 1:42.16, including a 25.08 butterfly from Kimberlee John-Williams and a 22.11 anchor from Vredeveld. They were joined by another senior, Hannah Peiffer, and a lone junior in Bree Roman on the breaststroke leg. This relay beat last year’s winning time by nearly two seconds.

John-Williams, who is bound for Georgia, was the runner-up in the 100 fly in 55.10 and the 100 back in 54.80. Those times are both slower than she was at last year’s meet, where she took both titles. Roman added a 5th individual title for the team by taking the 100 breaststroke in 1:03.44. This is her first year in yards swimming, as the junior transferred in to the country from Jamaica, giving a big boost to this team that didn’t have a ton of depth in their breaststroke group. Maddie Hoff (no relationship) and Elena Escalas tied for 2nd in 1:05.10, just beating-out John Paul II’s Paige Scheriger (1:05.13).

The Baylor School also took a win in the 200 free relay in 1:33.05. Vredeveld led that race off in 22.76, and was joined by John-Williams, Hannah Peiffer, and Bree Roman. In this race, they missed their State and National Record time from last year.

Interesting meet format. I am making my poor swimmer do the 100 fly and 100 free this year and she won’t get but about 9 minutes in between each.