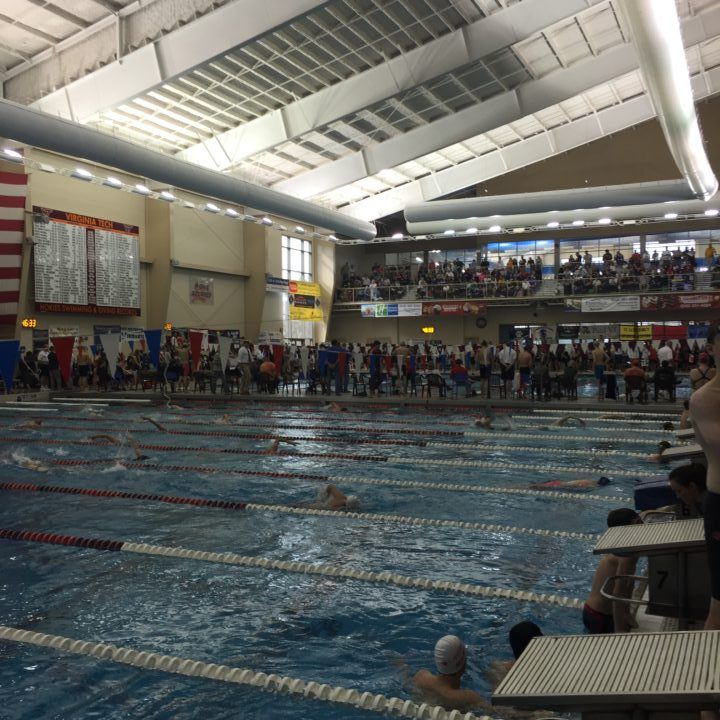 Rivals Virginia Tech and University of Virginia squared off at Virginia Tech's home pool in Christiansburg, VA, Friday and Saturday in a two-day dual meet.

Intrastate and ACC rivals Virginia Tech and University of Virginia squared off at Virginia Tech’s home pool in Christiansburg, VA, Friday and Saturday in a two-day dual meet.  The two squads split; the Hokie men downed the Cavaliers by a wide margin of 216-133, while on the women’s side, the Cavs outlasted the Hokies, 189.5-163.5.

The Hokie women jumped out early, recording five consecutive victories to kick things off Friday afternoon.  The Cavs responded by taking the last three events of the day.  Saturday morning looked to start the same, with Virginia Tech taking the shorter medley relay.  But UVA then took four of the six individual events, and the final relay, to win the meet.  Virginia Tech sophomore Reka Gyorgy was the only women to win two individual events, takin the 200 IM and 400 IM to open and close individual competition.

Things started similarly on the men’s side.  Ian Ho led off Virginia Tech’s 200 free with a 19.89, as the Hokie’s “A” team cruised to the win.  The Hokies won the first three individual events, and four of six on Friday, as well as the 400 medley relay to cap off the evening.  They kept things rolling on Saturday, winning the 200 medley relay, and another four individual events, before UVA picked up their only relay win by taking the 400 free relay.  Ho (50/100 free), Norbert Szabo (200 IM, 200 free) and Lane Stone (500/1000 free) all won two individual events for the Hokies.

This is annual meet for these two teams, both of which have had success at the conference level.  Virginia dominated the ACC for the better part of ten years, but its men team last won in 2013, and its women last won in 2016, as NC State has become the powerhouse in the conference (although it was the Virginia Tech men who ended the Cavs winning streak in 2014).

CHRISTIANSBURG – The Virginia Tech men’s and women’s swimming and diving teams split with rival Virginia on Saturday at the Christiansburg Aquatic Center. Tech’s men knocked off the 21st-ranked Cavaliers 218-133 while the Hokies No. 25 women fell to UVA’s 11th-ranked team, 189.5-163.5.

“This was our most balanced team ever in a dual meet versus Virginia,” said head coach Ned Skinner. “Every specialty represented us well and our coaches should be commended for their hard work in keeping the focus as we come off a very difficult training trip. Ian Ho, Lane Stone, Norbert Szabo and Jack Gigliotti all provided key sparks for us on the men’s side. Klaudia Nazieblo, Reka Gyorgy, Joelle Vereb, Emily Meilus and Ashlynn Peters performances really gave our women a fighting chance this weekend.”

The men’s team claimed the wins in seven of today’s 10 events, getting off to a strong start with five consecutive first place finishes. Tech kicked it off with Jake Lamparella, Norbert Szabo, Harrison Pierce and Ian Ho taking the 200 medley relay with a time of 1:29.44.

Ho led the Hokies to a win in the 50 free with a 20.22 mark as teammate David Herbert finished just behind in a second place time of 20.53. Lamparella claimed his second top finish of the day with a 48.99 in the 100 backstroke while Sean Workman secured third in a time of 50.29.

Justin Edwards recorded the Hokies’ fifth-straight win with a time of 1:59.65 in the 200 yard breaststroke. Pierce followed up with a third place time of 50.16 in the 100 fly.

The Hokies concluded the day going two, three in the 400 free relay. Lamparella, Herbert, Pierce and Szabo teamed up for a time of 2:59.55 while Hassler Carroll, Thomas Hallock, Stone and Aaron Boyd had a time of 3:02.50.

Tech again dominated on the boards, sweeping the men’s 1-meter as Ben Schiesl had the top score of 378.75. Jack Gigliotti had his second silver finish of the weekend with a score of 335.02 while Thomas Shinholser came in third (314.63).

This marks the fifth win for the H2Okies men over UVA in program history.

The women opened the day with a one, two finish in the 200 medley relay. Emily Meilus, Joelle Vereb, Maggie Gruber and Adriana Grabski had a time of 1:41.56 and were followed by team of Klaudia Nazieblo, Kelly Henry, Kayla Purcell and Danielle Griggs in 1:43.45.

The Hokies wrapped up the swim events with a third place finish in the 400 free relay as Grabski, Purcell, Abby Andrusin and Gruber recorded a time of 3:24.82.

The Hokies will be back in the pool next weekend when they travel to Ohio. Tech will face Cincinnati and Xavier on Friday followed by a meet against Ohio State, Michigan and Rutgers (women) on Saturday.

CHRISTIANSBURG, Va.-   The Virginia men’s and women’s swimming and diving teams completed a two-day meet against Virginia Tech on Saturday (Jan. 13) at the Christiansburg Aquatic Center in Christiansburg, Va. The No. 11 Virginia women’s team defeated No. 25 Virginia Tech, 189.5-163.5, while the No. 21 Cavalier men fell, 218-133, to the Hokies.

“We had a challenging day for the second day at Virginia Tech,” head coach Todd DeSorbo said. “The women came out with a win. We had some mishaps to end the meet yesterday with a disqualification on the men’s 400 medley relay, that we won, and likewise this morning on the women’s 200 medley relay, that we won as well and disqualified. That put us in a little bit of a hole, from a points perspective, so we had to dig out of that on both sides. Those are things we need to learn from, and be sure we correct and get better at as we head to next weekend and into championship season. Both teams fought well. We’re definitely tired and we can see it. Their legs are tired. They’re racing well. They’re racing smart. As we head into the next segment of our season, where ACCs are five and six weeks away, we are trying to fine-tune some things and continue to get better. The women came out and fought and won the meet. The guys fought hard, but came out with a loss. We definitely look forward to seeing both teams (Virginia Tech) at ACCs and giving them a run when all is even.”

Virginia will host NC State on Friday (Jan. 19) and North Carolina on Saturday (Jan. 20). The Cavaliers will recognize nine seniors at Saturday’s meet for Senior Day.