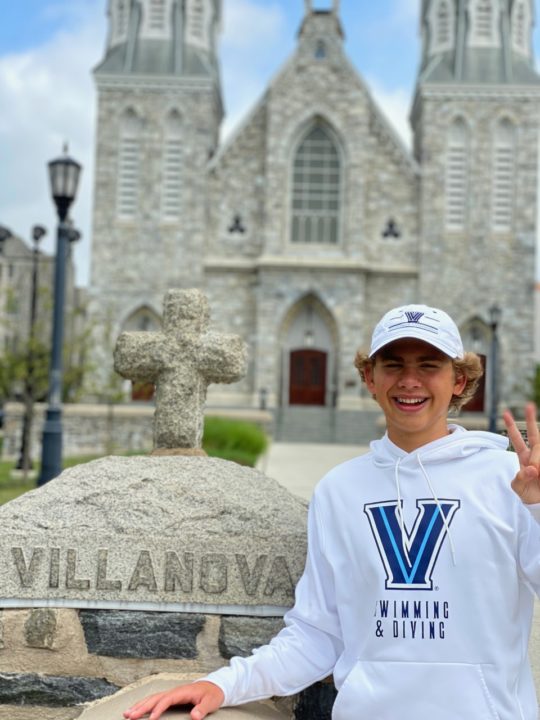 Joshua Brown set best times in the 200 butterfly, the 500 free and the 1000 free on Friday at the Highlander Intrasquad Meet. Archive photo via Andrea Bravo

Highlander Aquatics of Orlando, Florida hosted an Intrasquad meet on Friday to provide their swimmers another chance to compete prior to the Florida LSC championship season. Senior Joshua Brown of Lake Highland Prep School set three new personal bests at the meet: the 200 butterfly (1:51.06), the 500 free (4:26.96), and the 1000 free (9:05.31).

Brown, who will be headed to Villanova in the fall, has dropped substantial time in these events since the Fall of 2019 and will be one of Big East’s top swimmers in these events.

In October 2019, Brown’s best time in the 500 free was a 4:36.26. He’s managed to cut almost ten seconds from that time to the 4:26 he swam on Friday. That time would have placed him fourth at last year’s Big East meet and is under the current Villanova school record.

According to USA Swimming’s database, Friday was the first time that Brown swam the 1000. He split the race very well as he was 4:32.22 for the first 500 and 4:33.09 for the second. While the 1000 free is not a championship event at the Division I level, Brown is in some good company. His time is nine seconds under the Villanova school record. He now ranks 6th this year in the 17-18 age group and 98th all time.

In December Brown swam 15:31.30 in the 1650 free, dropping over 17 seconds from his previous best. That time would have been good for second at last year’s Big East meet and under 6 seconds away from the Villanova school record.

The 2021 Big East championships have been rescheduled to April. That meet will provide a better idea of where Brown might place at next year’s meet.

Other swims of note

So awesome! Can’t wait to see what he adds to the Villanova program and Big East next year!