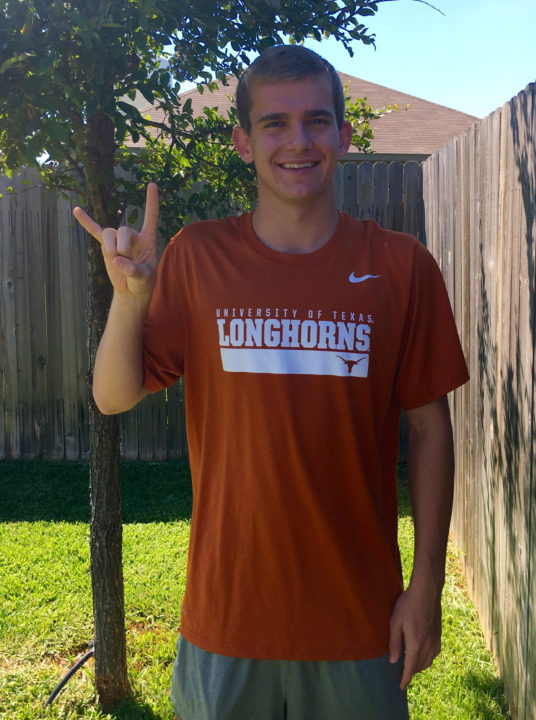 Chris Yeager, our #10 recruit on the list of top 20 boys in the high school class of 2017, has given his verbal commitment to the University of Texas. Current photo via Chris Yeager

Chris Yeager, our #10 recruit on the list of top 20 boys in the high school class of 2017, has given his verbal commitment to the University of Texas. Yeager won’t travel far when he heads off to college, as he swims for Nitro in Austin.

“I chose to swim at the University of Texas because of its incredible team atmosphere and legendary coaching. The academics at the University also fit exactly what I was looking for. I can’t wait to start my time as a Longhorn!”

Yeager is 2.5 seconds away from the 16th-place time at the 2016 NCAA Division I Championships. While he will arrive just after Clark Smith’s graduation, he will have one of the top distance training groups in the country with Townley Haas, Jeff Newkirk, Jonathan Roberts, and Thomas Colket.

Yeager will join Luke Bowman in the Texas class of 2021.

He’s in my calculus class at vista ridge high school

Big commit for Texas, any idea how many more they’ll take this class?

Nitro Central (Texas) is filling up with Nitro swimmers, I do not know whether to head downtown to Texas pool or north to Nitro pool when I take kids to practice #confusedpsychodad