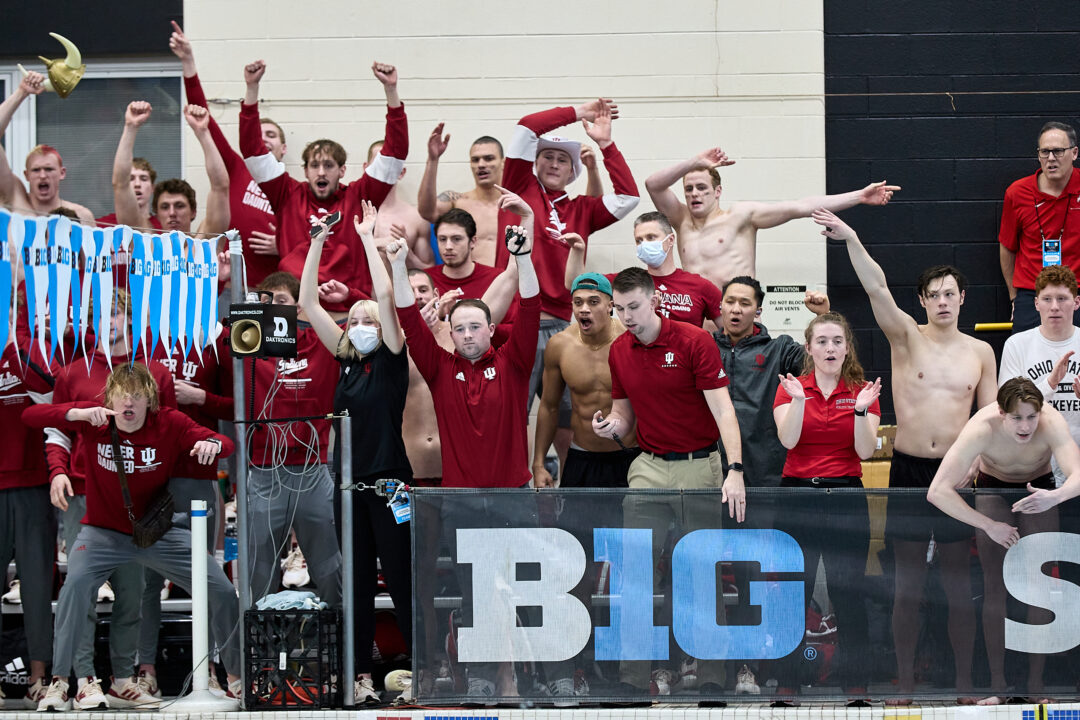 Van Mathias swam the 3rd-fastest 50 breaststroke split in the country with a 22.97, as Indiana took down Cincinnati in a dual meet this afternoon. Current photo via Michael Ringor

The Indiana Hoosiers hosted the Cincinnati Bearcats this afternoon. Indiana decisively won on both sides of the meet despite having an unusual lineup and entering exhibition swims at the end.

The #6-ranked Indiana men are now 4-1 for their season dual meet record, while the Cincinnati men move to 1-3. The #9-ranked Indiana women also improved their record to 4-1, and the Bearcat women now stand at 1-3.

Mathias’ breaststroke split is about half a second faster than he was at the Ohio State Invite (23.49) two weeks ago, and puts him behind only Minnesota’s Max McHugh and Auburn’s Reid Mikuta so far this season. Josh Matheny was the breaststroke leg on the 200 medley relays last season at Big Tens and NCAAs, with his best split being a 23.43. If Mathias continues to be the breaststroker on this relay and replicate the split, Indiana could potentially move into the top five teams in the country in this event.

Mathias also posted a personal best time by more than two seconds to win the 100 breast with a 52.26, making him the second-fastest on the team this year behind Jassen Yep. He finished his meet with a win in the 100 free (42.74) and an 18.83 anchor leg on the 200 freestyle relay.

Indiana’s breaststroke dominance continued in the 200 breast, as Max Reich swam a best time of more than a second to post a 1:52.35, which is the 5th-fastest time in the country so far this season.

Cincinnati junior Tommy Eaton won the 200 fly for the Bearcats, as he beat Indiana’s Armando Vegas by less than a second to win with a 1:45.35. Teammate Collin Singler made his way on to the Cincinnati All-Time Top-10 list for the first time, as he clocked a best time of 1:47.73 to move to 6th in the 200 fly.

On the women’s side, Indiana’s Maggie Wallace swept the distance events for the Hoosiers. She posted a 16:28.28 in the 1650, which is nearly six seconds quicker than she was at the Ohio State Invite a few weeks ago. She also won the 500 with a 4:51.04.

Similar to the men’s side, Indiana’s Brearna Crawford swept the breaststroke events for IU. She posted a 1:00.70 in the 100 and a 2:12.75 in the 200, beating Cincinnati’s Logan Lawhorn by almost seven seconds.

Up next, Cincinnati will head south for the CSCAA Open Water Championships in Florida before hosting Kenyon in January. Indiana has over a month break before hosting Michigan in mid-January.

Fast Breaststrokers in Breaststroketown (IU). Congrats to Max Reich with solid NCAA INV time and PB. Recalling his 2:10.9 long course last summer, this is not unexpected, but he was just outside the bubble last year.

I remember Mathias, Corbeau, and Heasley being the 3 most versatile swimmers to come out of Oregon swimming. Still I had no idea he a 22 split in him, let alone at a dual meet