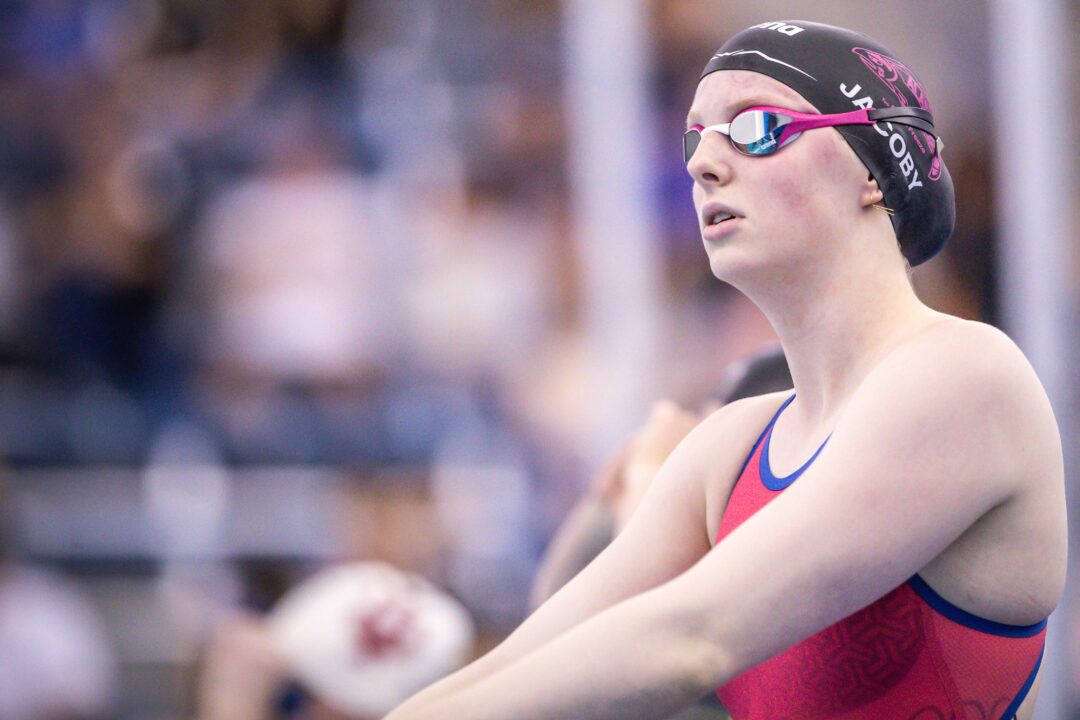 Jacoby's time was over a second faster than her previous best time, and beats out Kaitlyn Dobler's 57.71 NAG time set back in 2021. Archive photo via Jack Spitser/Spitser Photography

When Lydia Jacoby was ranked #3 in the girls’ class of 2022 high school recruit rankings last year, there was a lot of talk about how her short course performances weren’t on par with her ones in long course. There was plenty of evidence to back that up, such as when she failed to final at 2021 Short Course Worlds despite winning Olympic gold the same year, or when she didn’t set personal bests in yards during her senior year of high school (that being said, she didn’t race at any big taper meets in yards, such as NSCAs and Winter Juniors).

However, Jacoby proved her doubters wrong on Friday at the 2022 Minnesota Invite, and showed what she was truly capable in yards. In the 100 breast finals, the Texas freshman swam a massive personal best time of 57.54 to beat out Kaitlyn Dobler‘s 17-18 U.S. National Age Group record time of 57.71, which was set in February 2021. Jacoby finished just 0.06 seconds behind Anna Elendt tonight, and dropped over a second from her previous lifetime best of 58.87.

Elendt and Jacoby are now the second and third fastest swimmers in the NCAA behind Dobler, who swam a nation-leading time of 56.94 at the 2022 Art Adamson Invite.

Jacoby does not turn 19 until February 29 (a date that only exists on leap years, so we can say February 28/March 1 for now) 2023, which means she’s capable of resetting this NAG up until the end of Big 12 conference championships.

With Jacoby now for certain capable of making an NCAA ‘A’ final (her time would have finished seventh at NCAAs last year), the 2020(1) Olympic champion in the 100 breast is finally beginning to show her potential and value in the yards pool.

Good for her! Congratulations, Texas is really paying off!

Of course she is a leap day child. What else would she be? So technically she is like 4 years old?

What was the NAG record in the 4-6 age group? Guessing that won’t be broken again for quite some time.

Didn’t Alex Walsh go 58.1 when she was in that age group?