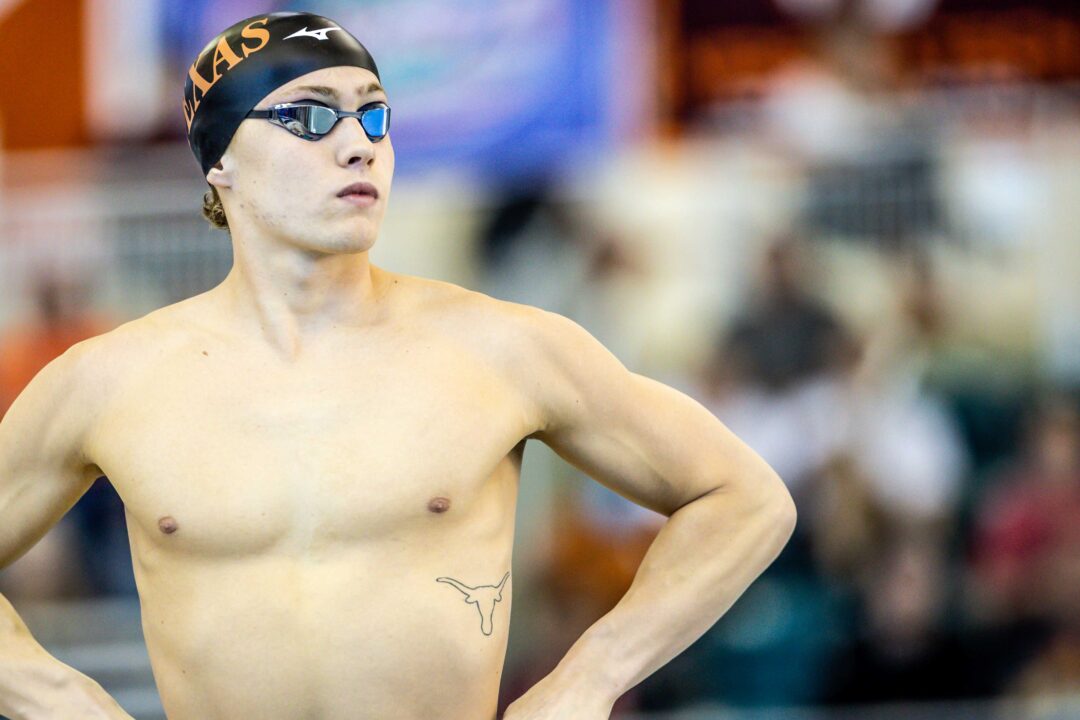 Carson Foster and the Texas men will take on Cal in a must-see showdown at the Minnesota Invite this weekend. Archive photo via Jack Spitser/Spitser Photography

The second round of midseason invitational meets in the NCAA will be the highlighted by the Minnesota Invite, where some of the top swimmers in the nation will go to battle at a meet that has historically produced some record-breaking performances.

The meet’s headliner is the team battle on the men’s side between Cal and Texas, the top two male programs in the NCAA that have finished 1-2 in some order in 10 of the last 11 seasons and eight in a row.

At last year’s Minnesota Invite, the Longhorns won in decisive fashion, though the Golden Bears ultimately got the last laugh with the NCAA title.

Invite scoring is different than it is at nationals, with 24 swimmers scoring in each event, but it’s still worth noting that more than 55 percent of readers picked Texas to beat Cal this weekend.

The Texas and Cal women will also be intriguing to see in action, with the Longhorns coming off a breakout runner-up finish in March and the Bears returning under a new combined program led by Dave Durden with longtime head coach Teri McKeever out on administrative leave.

The competition isn’t just a Texas/Cal battle, with a strong field of Power Five teams in action.

Once the meet gets underway, live results will be available here.

With so many big names competing this weekend, you’d be hard-pressed to find an event that doesn’t bring a certain level of excitement or intrigue to the mix.

Here are five we’ll be keying in on in particular (note this is done without seeing psych sheets):

At the 2022 Men’s NCAA Championships, more than half of the 200 IM ‘A’ final (5/8) was made up of swimmers from either Cal or Texas, and although two of those swimmers won’t be in Minneapolis, the event will still certainly be one to watch

The top swimmer in the field from NCAAs is Cal junior Destin Lasco, who was second to Leon Marchand last season after placing third in his freshman year.

Lasco clocked 1:38.21 in March to become the fourth-fastest performer in history, and placed first at last year’s Minnesota Invite in 1:41.53.

Texas junior Carson Foster and his senior teammate and older brother Jake Foster placed sixth and eighth at NCAAs last year, respectively, and ranked second and fourth in the country this season prior to the start of midseason invites. Carson went 1:42.68 at the SMU Classic, while Jake was 1:44.06 at Texas’ dual with Virginia.

However, it’s worth noting that Carson opted out of this event (he only raced the 400 IM) at last year’s invite, likely due in part to him prepping for the Short Course World Championships in Abu Dhabi. The circumstances are very similar this year, with Foster slated to represent the U.S. at the 2022 SC Worlds in Melbourne in just over two weeks, so it’s possible he only races a few times.

The field will be bolstered by Cal’s Jason Louser and Texas’ Braden Vines, who were 14th and 15th at NCAAs last season. Another Longhorn, Caspar Corbeau, was a consolation finalist and went 1:41.6 to take second to Lasco at the 2021 Minnesota Invite, but social media indicates he’s in the Netherlands meaning he’ll likely miss the meet as he prepares for SC Worlds.

Among the marquee events on the women’s side will be the 200 back, where juniors Phoebe Bacon of Wisconsin and Isabelle Stadden of Cal headline the field.

Bacon won the national title in this event as a freshman, and then last year, was the runner-up to Stanford’s Regan Smith, who has since turned pro and therefore makes Bacon the top returner from the 2022 NCAAs.

Stadden was third in 2021 and fourth last season, with Alabama’s Rhyan White (second in 2021, third last season) the only swimmer between Bacon and Stadden both times.

This season, Stadden has looked strong. She ranked second in the NCAA through the early portion of the 2022-23 season (prior to the beginning of the midseason invitational meets in mid-November), clocking 1:52.96 at a dual meet against Utah.

The race figures to be a head-to-head battle between these two, though Cal’s Ayla Spitz and Texas’ Olivia Bray could also put up some competitive times.

Bacon and Stadden may also have Claire Curzan‘s NCAA-leading 1:48.50 swim from the Wolfpack Invite in the back of their minds.

The men’s 50 free will be must-see TV simply because of the presence of Bjorn Seeliger, who will have a chance to answer the 18.27 produced by Tennessee’s Jordan Crooks two weeks ago, and we should also get an exciting battle between Seeliger and Texas’ Daniel Krueger in the 100 free.

But the 200 free could be the race of the meet, with Longhorns Luke Hobson and Coby Carrozza set to clash with Cal’s Gabriel Jett and Robin Hanson.

Both teams have graduated their lone ‘A’ finalist from last season in this event (Drew Kibler for Texas, Trenton Julian for Cal), but those four names listed above are ready to take over and be national contenders this year.

Hobson, Hanson and Carrozza all swam in the consolation final last season, and Jett just missed out in 18th.

Carson Foster and David Johnston could also feature here for Texas, depending on how the entries work out.

This event will pit Texas teammates Anna Elendt and Lydia Jacoby against one another.

After placing 12th in the 100 breast as a freshman, Elendt had a breakout year last season as a sophomore, placing fourth at NCAAs while becoming one of the fastest swimmers in history with her prelim time of 56.88 (which was faster than the winning time in the final).

Jacoby, the surprise Tokyo 2020 Olympic champion in the long course version of the event, has made great strides early on in her freshman year in the SCY pool, nearing her lifetime best of 58.87 at the Longhorns’ dual with UVA in early November (58.96).

Elendt, who went 58.14 against the Cavaliers, will be eyeing the time of 56.94 reigning NCAA champ Kaitlyn Dobler put up at the Art Adamson Invite two weeks ago, while Jacoby will be aiming to prove she’s a threat for the national title in March.

As of now, only Dobler and UVA’s Alex Walsh (57.94) have been sub-58 this season, and Walsh is a near-lock to not be racing this event at NCAAs.

Despite the expected absence of Corbeau, the men’s 100 breast will feature two-time defending NCAA champion Max McHugh up against Cal fifth-year Reece Whitley and his senior teammate Liam Bell.

McHugh and Whitley have been going head-to-head throughout their collegiate careers, and although McHugh has frequently gotten the upper hand, Whitley showed impressive form last month on the FINA World Cup circuit.

McHugh, Corbeau, Bell and Whitley occupied the top four spots at NCAAs last season, so even without Corbeau, this field is loaded and could well produce the top-three times so far this season.

Only one swimmer, Auburn’s Reid Mikuta (51.14), managed to dip under Corbeau’s 51.30 showing from Texas’ dual with Virginia during the first round of invites, and it wouldn’t be a surprise to see McHugh, Whitley and Bell all go 50-point.

The meet will be streamed live on NSPN here, though a purchase is required.

The site says you can get a swimming-only pass for the entire meet for $30, or a pass to see swimming and diving for $35. However, it also lists a $6.99 per month rate, which may be an alternative option.

Any idea whether Isabel Ivey and Alicia Wilson are done at Cal? Ivey has posted on Instagram suggesting they’re moving on, but it’s not clear whether that’s a transfer or not.

No Jason Louser on the Psych sheets

No wes jekel from Wisconsin either, heard he might be done for them

hope he can rock a 50free, too

Some flights to MSP are cancelled or delayed. Teams will arrive late

Caspar Corbeau swims the RQM. https://livetiming.knzb.nl/RQM2022/ This meet also include some Brittish stars like Tom Dean

Sleeping on Michael Rine in the Men’s 200 IM‼️

Is there a new definition of “Sleeping on?” His PB is 11+ seconds back of Lasco.

At least they have the streaming option! Even if it costs money, thank you host team for providing that. Much appreciated