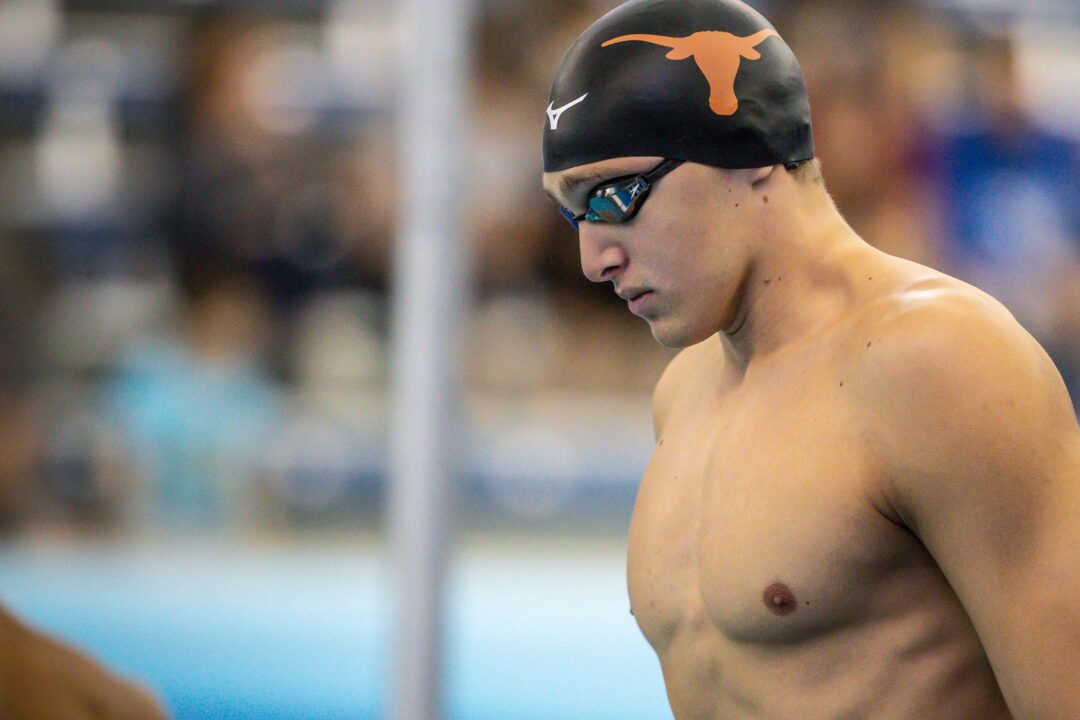 Next week's Minnesota Invite will pit the two best men's teams in college swimming against one another for a precursor of yet another NCAA battle. Archive photo via Jack Spitser/Spitser Photography

Our most recent poll asked SwimSwam readers who they favor at next week’s Minnesota Invite between the top two men’s teams in the nation:

Question: Which men’s team will prevail at the Minnesota Invite?

Next week’s Minnesota Invite will pit the two best men’s teams in college swimming against one another for a precursor of yet another NCAA battle in four months time.

Texas and Cal have long dominated the men’s ranks in the NCAA—the two teams have finished 1-2 in some order in 10 of the last 11 seasons, and eight in a row.

This year, many think the Bears will roll to an easy victory at nationals, but that doesn’t change the fact that more than 55 percent of readers voted Texas to win next weekend’s invite.

Invitational scoring is different than it is at NCAAs. Provided the Minnesota Invite remains the same as last year, the top 24 swimmers will score in each individual event, with 32 points going to the winner.

The Longhorns came out on top last year, finishing 401 points clear of Cal. While one could argue invite scoring favors Texas, the poll was meant to be more of a gauge of who people are more bullish on at this point in the season.

Texas has put up some quick times so far, and held some of the top times in the nation prior to last weekend’s opening round of invites. Cal, on the other hand, has only contested a couple of dual meets and haven’t really shown their cards as of yet.

While not many will remember what the final score is at the end of the Minnesota Invite next Saturday, there will be a prevailing sense of who had the upper hand, and which side is more confident entering the postseason in the new year. At the very least, the meet will tell us if it will be a lopsided result, like some predict, or yet another close battle at NCAAs come March.

Below, vote in our new A3 Performance Poll, which asks: In a hypothetical ISL expansion draft, who would you pick first?

How about those Vikings!!

Who cares who’s rested and who’s not. Imo it’s important to swim fast at all times, not just once a year when it “matters most”.

Ask MA and Shaine Casas about this

If you’re looking at scoring potential in the final, arguably she could win the 50/100 fly, 50/100 back and put up competitive times in the 50/100 free. She could also contribute to every relay, and be competitive in multiple skins strokes.

But curzan could do the same but also do 200s

MacNeil and Curzan will not he at Minnesota Invite.

Jackpot points are worth huge amounts in ISL. MacNeil has the capacity to win four events while Curzan is unlikely to win any. It’s much better to have a chance to win 4 events than to be competitive in a lot but unlikely to win any. MacNeil also contributes more to relays because her 100 free and fly are better.

What does this have to do with the Minnesota Invite or the men’s field?

It’s about the next poll which is contained in the article.

Your name is fitting

Hard to tell on this one. Cal is definitely the favorite to win the national title but they don’t normally rest as much for mid-season. Should be a tossup.

Texas is apparently shaving and resting for the invite while Cal and other teams plan on training through. Texas should be impressive given the rest they’re getting.

If this is true (UT resting and shaving) it makes the poll nearly meaningless.

At the same time, I think its great if Tex is giving athletes a chance to swim fast in mid season. Even if it’s more like 2 or 3 light practices ahead of travel, compared to practicing hard right up until getting on the plane.

It’s important to build in rest and pairing that with a high level meet seems ideal. It also means they can try out some different events and not worry if 2 finals on one evening is going to work. Might as well let everyone swim an expanded set of events. Then use the feedback to plan for winter training.