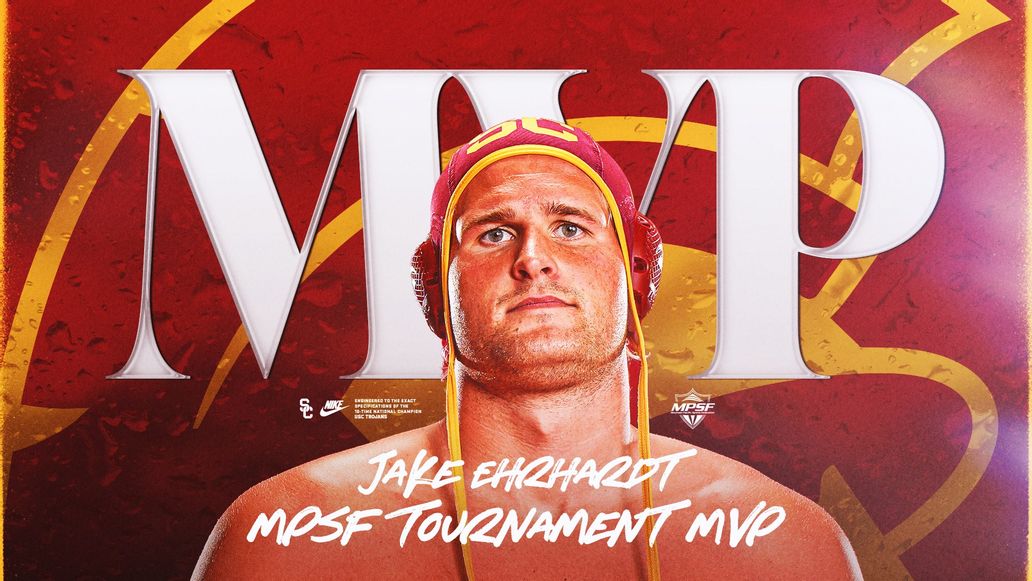 USC men’s water polo captain Jake Ehrhardt delivered nine goals for the Trojan cause at the 2022 MPSF Tournament to help anchor USC’s run to the title. The Trojans never trailed from wire to wire at the event, as they took down Austin College in the quarterfinals, UCLA in the semifinals and Stanford in the title match. Ehrhardt was named Tournament MVP and is joined by teammates Ashworth Molthen, Massimo Di Martire and Kyle McKenney on the 2022 MPSF All-Tournament Team.

Jake Ehrhardt is the seventh Trojan to be named MPSF Tournament MVP, following McQuin Baron’s victory in 2017 when USC last won the conference crown.. It’s Ehrhardt’s second time on the MPSF All-Tournament Team, following a 2020 selection in his junior season. Now a super senior, Ehrhardt was instrumental in driving the Trojans to this year’s crucial MPSF Tournament championship, which secured an automatic berth into the 2022 NCAA Tournament. The winning run ensured that USC would make an 18th consecutive trip to the NCAA Tournament.

Ehrhardt’s offensive impact grew bigger in each game of the tourney, as he provided two goals in the opening 30-3 win over East representative Austin College. Up against UCLA in the semifinals, the Trojans avenged a stretch of four losses to the Bruins with a powerful home stand to net a 12-11 win thanks in part to a three-goal outing from Ehrhardt. He’d drum up four more in the tile match as USC topped Stanford 14-10 to keep USC undefeated in home waters this year and lock in the Trojans’ NCAA qualification.

Ehrhardt had plenty of help along the way, though. As it took a total team effort for the Trojans to claim their 12th MPSF Tournament crown. Fellow senior Ashworth Molthen was a force on both ends of the pool along with grad student Massimo Di Martire. Molthen’s steady play and setup passes kept USC on course, and Di Martire stepped up big in the final with a four-goal explosion. Backing up the defense in the key wins was goalie Kyle McKenney, who earned his place on the MPSF All-Tournament Team thanks to an eight-save stand vs the Bruins and a nine-save effort in the total match against Stanford.

USC’s 18th straight NCAA appearance will come in Berkeley, Calif., as the No. 3 seed in the 2022 NCAA tourney. The Trojans open up on Dec. 1 with a 5 p.m. meeting against either Princeton or Fordham. There NCAA semifinals are set for Dec. 3, with the championship bout taking place on Dec. 4.