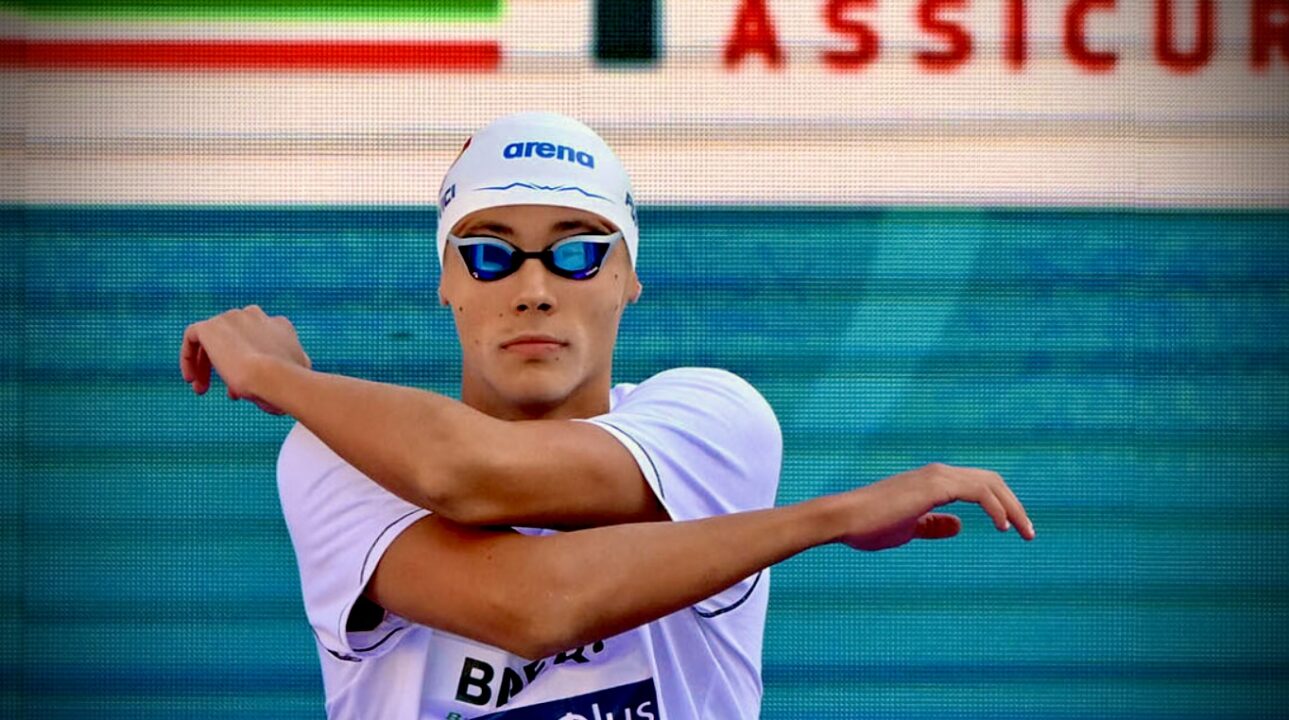 David Popovici dropped more than a second off his best 100 IM time, but it wasn’t quite enough to secure his third national title in as many days Current photo via Fabio Cetti, LEN

David Popovici dropped more than a second off his best 100 IM time, but it wasn’t quite enough to secure his third national title in as many days at the Romanian Short Course Championships on Saturday.

Daniel Martin (53.41) handed Popovici (53.47) his first individual final defeat in over a year, snapping a 12-race winning streak that dated back to the 2021 FINA World Cup series last October.

Popovici lowered his lifetime best by .17 seconds in prelims with a 54.64 to take the top qualifying spot in an “off” event. The 18-year-old shaved another second off that mark during the evening session, but the 22-year-old Martin also dropped over a second en route to the gold medal. Robert Glinta’s national record of 52.45 sits just about a second out of reach of both Popovic and Martin.

Popovici wasn’t lying about his strokes. His Breastroke is well let’s just say barely legal. Backstroke isn’t too bad but he does over rotate a bit on his sides. His Butterfly though it looks good I’m curious to see what he could go in a 100 fly seems like it’s not at all out of the realm of possibility he could become a world class Flyer.

SwimSwam is so obsessed with Popovici. There are a lot of swims that worth watching more than a 53s 100 IM.

his backstroke could be something for sure

Speaking of DP heading to worlds… 20 days until worlds! Do we know when psych sheets / official entries come out? I need some worlds prediction articles (a fantasy draft even!?) to get me through.

Looks like the schedule has come out and it’s slightly problematic for a few swimmers. All events (other than relays) have the same male and female events back to back. I’ve seen that at trials but never in an international comp before.

Some interesting tight doubles:
-Day 1 – 200IM final immediately followed by 100BK semi (could be an issue for McKeown assuming she swims both)
-Day 2- 100 free semi immediately followed by 100BK final (Ceccon is top 3 in the world for both events, Hunter Armstrong is scheduled to swim both, MOC came very close to having this double too). MMR is also this session so potential triple for Ceccon.
… Read more »

He won’t final in freestyle but he will in backstroke. He was a bit of a dud in Tokyo but he did well in Budapest.

Yeah that’s probably true. 50 free/fly/back is probably a full enough schedule anyway. Not many are capable of medalling in four individual events.

However, I included him for the 100 free because he’s the 6th fastest performer this year (and Brooks Curry, who is 5th, isn’t going) and well below the A cut so he could certainly make the final at least if he tried.

In the next years the now 18 year-old Popovici will increase a lot is raw speed with the physiological development and the right training.
For instance, today the 22 year-old Kliment Kolesnikov swam 22.31 in the 50 back semis, only 0.09 shy of Manaudou’s WR (and his reaction time at the start was a bit slow, so he’ll have another chance of WR in tomorrow final), and 20.94 in the 50 free.

How do you explain the decline of Cameron McEvoy? Obviously Popovici is not McEvoy but my point is that improvement with age is not a given. Nonetheless Popovici is aware that he is not entitled to get faster, and focusing on doing the things he needs to do to get faster now.

Same with Regan Smith. She broke multiple world records at 17 and hasn’t come close to those times again 3 years later. She certainly still could though.

Not everyone improves with age, and those that do don’t always improve linearly.

That’s obvious. Anyway Regan Smith in the 50 and 100 back has recently swum PBs or come very close.

She also made some pretty drastic changes to her training and the results were fine, but not stellar. I’m very curious to see if she makes improvements at ASU.

I had already answered this morning (I don’t know why my comment wasn’t approved) that McEvoy isn’t the best counterexample, because he peaked, anyway, at 21-22. For instance, his PB in the 50 free is 21.44 swum at 22 years of age, while his PB at 18 was 22.26. In the 100 free his PB is 47.04 (swum just before turning 22) while his PB at 18 was 48.07. There are other swimmers (for instance Croatian Karlo Noah Paut) who swam amazing times in the 100 free at 16-17 and then failed to improve, but they are a clear minority. Obviously, commitment, motivations, the right training and being injuries-free, are the most important things beyond the physiological development.

Speaking of Russia, has swimswam deliberately decided not to write anything about their short course championships?

in scm? so barely making the final ok

He has an interesting body undulation in breaststroke.

How are things looking for Romanian relays on the men side?
I know that SwimSwam wrote an article earlier in the summer about this but without following it to closely I would think things are looking better (even though this is SCM season and not LCM).