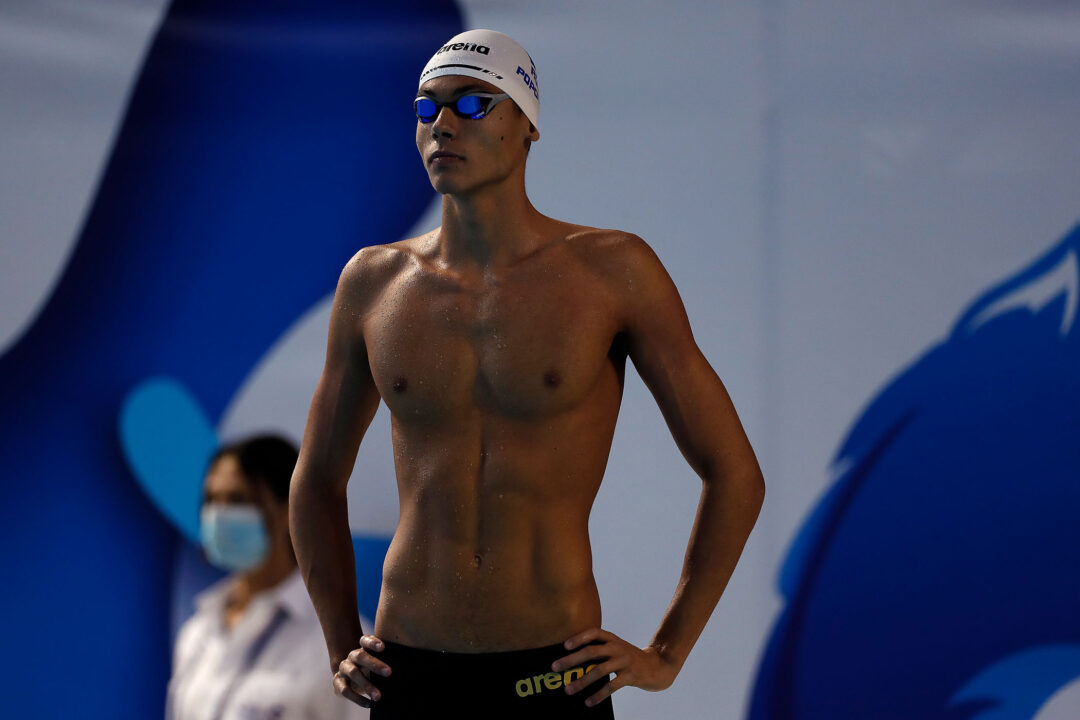 After a two-month break from competition, David Popovici was back to his record-breaking ways at the Romanian Short Course Championships on Thursday.  Archive photo via Courtesy of LEN/Simone Castrovillari

After a two-month break from competition, David Popovici was back to his record-breaking ways at the Romanian Short Course Championships on Thursday.

Popovici won the 100-meter freestyle national title with a time of 46.62, taking down the national record of 46.64 that Robert Glinta clocked at the European Championships last November. Popovici shaved .15 seconds off his previous best of 46.77 from the FINA World Cup last October.

“This record means quite a lot compared to others I have, because it was Robert Glință’s,” Popovici said. “I remember when he set it, he told me he was doing it especially to be in front of me. He said, ‘I know it’s not going to last extremely long, but I want to have it.’ And he had it, now he passed it on to me.”

Utah fifth-year Andrei Ungur took silver in 48.42 and 17-year-old Patrick Sebastian Dinu lowered his personal best to 48.62 for bronze. Dinu swam alongside Popovici on several of the Romanian freestyle relays that medalled at Euros and World Juniors this summer.

A two-time world and European champion, Popovici has already broken one world record in the 100 free while coming shockingly close to a second in the 200 free. According to an interview translated from Romanian, he spoke with local media after his recent race about viewing this short-course season as a valuable learning process with no expectations attached.

“I’ve still got quite a long way to go before the world record in the short pool — it’s a whole different kettle of fish,” said Popovici, who’s 1.78 seconds away from Kyle Chalmers’ global standard of 44.84 from last October’s World Cup stop in Russia. “That’s why I came here, that’s why I’m going to the Short Course Worlds next month, to learn to compete, to fight in a very different pool.

“It’s very different from the normal one: halved, twice as many turns,” he said. “It’s a competition for the most explosive, dynamic, forceful. I’m learning. I’m still learning.

“I’m going to the Worlds next month to learn; I have no time or place targets,” Popovici added. “If I make the finals, great. If I get medals, even better, but I’m not necessarily aiming for that. I’m going to learn from those who are better than me in the short pool, to be better myself and at some point to be able to compete with them.”

Popovici still has a few more events on his slate for Short Course Nationals in Otopeni. He’s scheduled for the 200 free on Friday, the 100 IM on Saturday, and the 400 free on Sunday.

“I aim to take all the medals here, because it’s an easier competition than the World Championships to come,” Popovici said.

At just 14 years old, Aissia Claudia Prisecariu triumphed in the 100 back with a time of 59.84. She was the only swimmer sub-1:00 in the final. A couple months ago, Prisecariu posted a 1:02.58 in the long-course 100 back en route to a fifth-place finish at World Juniors.

Always very centered and aware. Incredibly wise for a guy his age.

Expecting an extremely ignorant 200 and 400 SCM from this guy once he figures it out. Gonna go places, don’t sleep on this dark horse heading into Paris

Since when is a world record holder a dark horse?!

The Chlorinated Philosopher – articulates himself so well every time he is interviewed.

This guy is blowin’ my mind!

What is a kettle of fish?

The interview was in romanian. Word by word it means “it is another fish dish” and it is used when something is not what you are expecting. Kettle of fish is the English adaptation of this expression and is really accurate.
Meaning: https://dictionary.cambridge.org/dictionary/english/be-another-a-different-kettle-of-fish