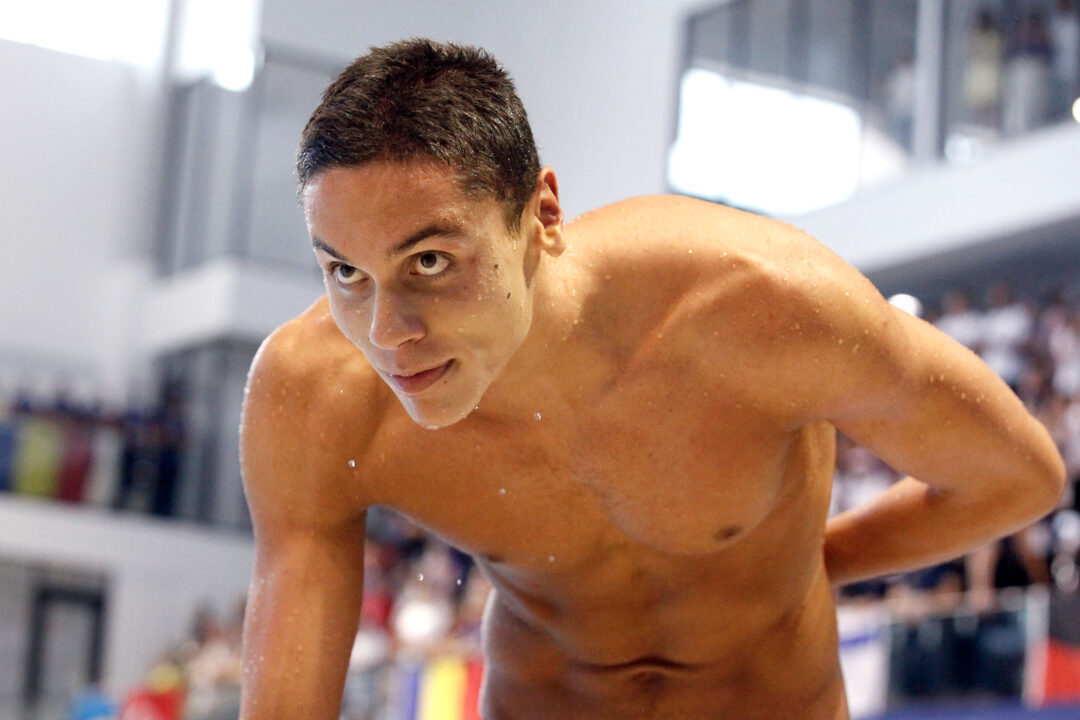 David Popovici added another national title to his haul on Friday with a victory in the 200 free at the Romanian Short Course National Championships.  Archive photo via LEN/Simone Castrovillari

David Popovici added another national title to his haul on Friday with a victory in the men’s 200-meter freestyle at the Romanian Short Course National Championships in Otopeni.

The 18-year-old freestyle ace reached the wall in 1:43.06, slightly slower than his own national record of 1:42.12 from the European Short Course Championships in Kazan a year ago.

“It’s my own record from last year, done in Kazan,” Popovici told local media after the race. “I’ll probably beat it soon. It’s not necessarily something I set for myself, but if it happens, I’ll gladly accept it, as usual. What’s it like to break my own records? Pleasure. I know that’s one of the only goals in swimming: to beat myself.”

Popovici was more than three seconds ahead of the field as Mihai Gergely touched second in 1:46.59 and Vlad Stefan Mihalache placed third with a 1:49.08. He hasn’t lost an individual final in over a year since the FINA World Cup stop in Kazan last October.

“I am satisfied,” Popovici said. “The only goal was to come out clean, to be a calculated and well-structured race. I’m going to talk to the coach next, but it felt good, it felt like I was getting more and more ready for the Worlds next month.”

On Thursday, Popovici set a new Romanian standard in the 100 free with a 46.62 en route to his third short-course national title. Looking ahead, he’s entered in the 100 IM on Saturday before he’s set to double in the 100 butterfly and 400 free on Sunday. This weekend is his final tune-up before the Short Course World Championships next month in Melbourne.

“I’m still not used to this 25-meter format, but I’m starting to get used to it,” Popovici said. “I’ll continue with it at the Worlds next month. I’m looking forward to the long pool season, the Olympic pool, where I’m getting better — where I have time and enough meters to get my speed.”

In other highlights from the second finals session, a pair of national records got taken down and it’s tough to tell which one was more impressive. After winning the 100 back on Thursday, 14-year-old Aissia Claudia Prisecariu brought home another national title in the women’s 200 back, this time setting a national record along the way with a time of 2:08.97. She became the first Romanian sub-2:09 as she lowered the previous mark of 2:09.29 set by Carina Macavei in 2016.

Also of note, Prisecariu wasn’t the only 14-year-old to secure a national title on Friday. Eliza Elena Diamandescu provided further proof that the future of Romanian swimming is bright with her 800 free victory in 8:55.75.

The winning streak of Popovici ended today with the second place in an entertaining 100 IM won by Martin (53.41) towards the 53.47 from David; a great improvement in his PB.
Impressive win by 17 year-old Vlad Stefan Stancu in the 1500 free (14.41.14) northeless his clear lack of experience in this race in SC. Never watched so many changes of stroke frequency by a swimmer, like Stancu did today, so he has plenty of room for improvement when he’ll fix his race strategy (and he’ll have other swimmers in the lanes next to him)

Did he even suit up for this meet?

I noticed he wasn’t suited up in the morning. He was the only one not suited then. In the final he had a competition suit though