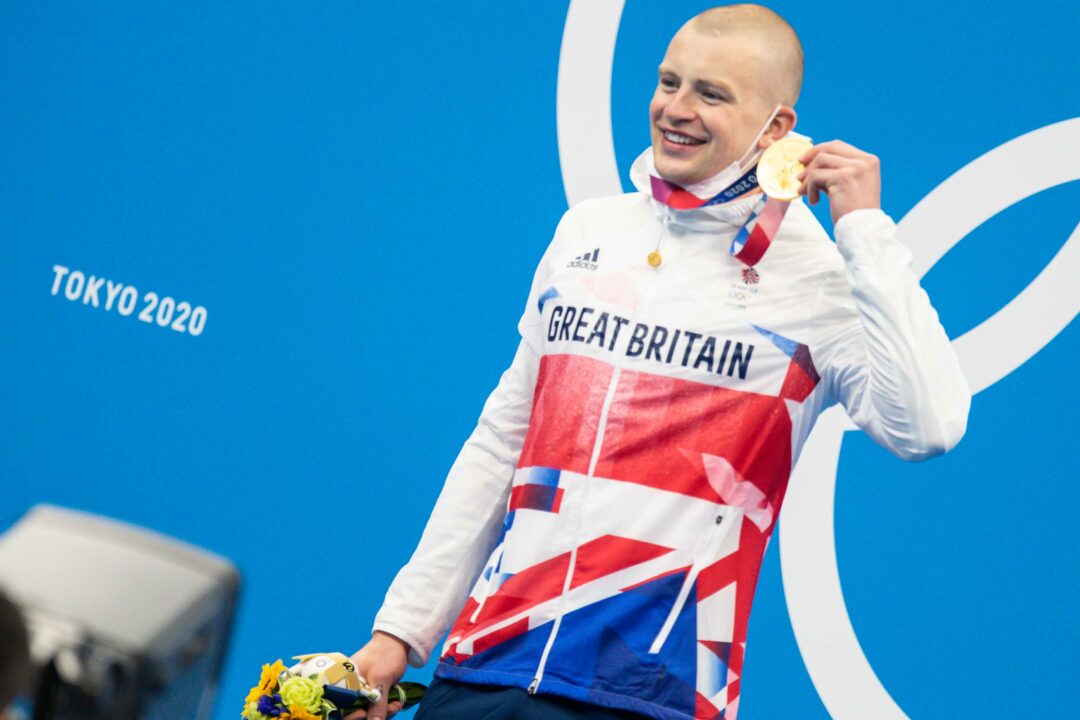 Peaty was appointed Officer of the Order of the British Empire for services to swimming and mental health at a ceremony in Windsor Castle earlier this week. Archive photo via Jack Spitser/Spitser Photography

Three-time Olympic gold medalist Adam Peaty was appointed Officer of the Order of the British Empire (OBE) for services to swimming and mental health at a ceremony in Windsor Castle earlier this week.

Peaty, 27, receives the honor five years after earning an MBE (Member of the Order of the British Empire) in 2017, which came after his Olympic gold medal triumph at the 2016 Games in Rio.

“Words can’t describe how proud I am to receive this prestigious honor,” Peaty said on social media. “Thank you to all the people that have helped get me this far – big or small it all matters. Time to enter new territory.”

Adam Peaty O.B.E. (Officer of the Order of the British Empire)

Words can’t describe how proud I am to receive this prestigious honour. Thank you to all the people that have helped get me this far – big or small it all matters. Time to enter new territory. 🇬🇧 pic.twitter.com/qsytodRwBC

Peaty was first announced as an honoree of the OBE in the New Year’s list at the end of 2021 alongside fellow aquatics athletes Tom Daley (diving), Bethany Firth (Para swimming) and Hannah Russell (Para swimming). Chris Spice, the Performance Director for British Swimming, was also promoted to OBE status.

Order of the British Empire honors were established in 1917 by King Georgie V, and includes five tiers across civilian and military divisions. The top two classes of the honor anoint an individual as a knight if male or dame if female.

Peaty was forced to miss the 2022 World Championships this past summer after injuring his foot, and returned one month later to compete at the Commonwealth Games on his home soil in Birmingham, England, where he won gold in the men’s 50 breast while surprisingly missing the podium in the 100 breast.

With that setback serving as motivation, Peaty has recommitted himself to training full-on and will contest the Short Course World Championships next month in Melbourne, Australia, kickstarting the 18-month run-up to the 2024 Olympics in Paris.

Thomas Shelby is the top OBE