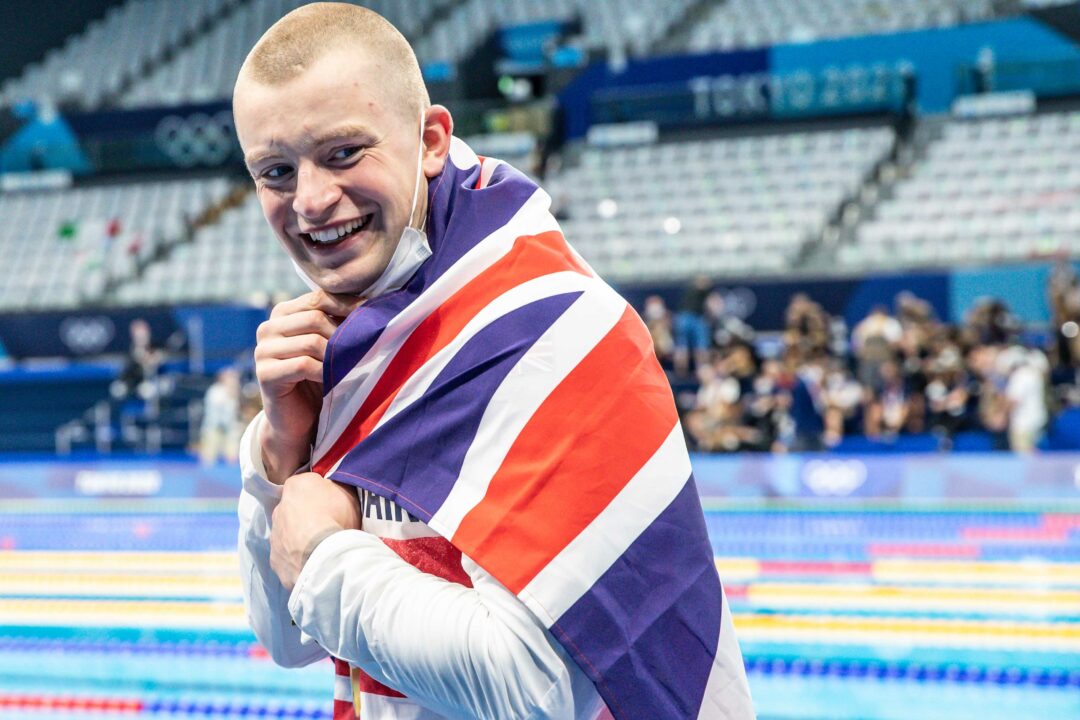 January 1 saw 20 people connected to swimming & diving in the UK receive orders of chivalry as Members or Officers of the Order of the British Empire. Archive photo via Jack Spitser/Spitser Photography

20 individuals connected to swimming and diving were given honors within the Order of the British Empire to end 2021.

The ceremonial honor was established in 1917 by King Georgie V, and includes five tiers across civilian and military divisions. The top two classes of the honor anoint an individual as a knight if male or dame if female. The awards are given for contributions to the arts and sciences, work with charitable and welfare organizations, and public service outside of the civil service.

There are over 100,000 living Members worldwide, though only 1,464 Members may be appointed in any given year.

Five more people related to aquatic sports were appointed to the fourth class, the Officer class, which is limited to 858 appointments per year.

Tom Daley, Lee’s partner in winning Tokyo gold in the platform synchro event, was also elevated to this category for “services to diving” as well as services to LGBTQ+ rights and charity. Daley, who is one of the world’s most prominent ‘out’ athletes, has become a figure-head for The Brain Tumor Charity in the UK. His dad died from a brain tumor in 2011.

Hannah Russell won her 3rd Paralympic gold medal in swimming in 2020 in the 100 back, and was elevated to Officer status as well. Chris Spice, the Performance Director for British Swimming, was also promoted to OBE status.

While the honors are largely ceremonial, they do come with certain specific benefits. Holders of the MBE or above status are entitled to get married in a special chapel in St. Paul’s Cathedral, as can their children.

A host of British Swimming’s Olympic and Paralympic champions from an incredible Tokyo 2020 Games have been recognised in the New Year’s Honours List for 2022.

Bethany Firth and Hannah Russell have been awarded OBEs (Officer of the Order of the British Empire) for services to swimming after both retaining individual Paralympic titles in the summer as part of Paralympics GB’s most successful sport, with Firth also playing a key role in the victorious Mixed S14 4x100m Freestyle Relay quartet.

Tom Daley’s impact from the 10m platform and far beyond has seen him handed an OBE for services to diving, LBGT+ rights and charity at the end of a year that saw him claim his maiden Olympic title, alongside Matty Lee, in the Men’s 10m Synchro, while triple Olympic champion Adam Peaty‘s continued dominance in the pool sees him become an OBE for services to swimming and mental health awareness too, as a vocal spokesperson on the subject.

A quintet of OBEs for British Swimming athletes and staff is completed by Performance Director Chris Spice, who oversaw Britain’s best-ever results in the Olympic pool – four golds, three silvers and one bronze – and receives the honour for services to swimming and high performance sport.

There are also MBEs (Member of the Order of the British Empire) for 13 Olympic and Paralympic gold medallists across the disciplines of diving, swimming and para-swimming, after a stunning year for British aquatics.

Steve Parry, a bronze medallist from the Athens Games in 2004, has also been awarded an MBE in the latest New Year’s Honours List for services to swimming, while Anya Francis is on the list for services to young people in Durham through swimming.

Adam Peaty was made an MBE in 2017 after earning his maiden Olympic crown at Rio 2016. Five years on, after receiving an OBE, he said: “It’s an honour to be recognised amongst so many great people. 2021 has been a year like no other for me in many ways with so many fantastic experiences.  After a challenging couple of years it was amazing to see the hard work and dedication of our team pay off in Tokyo and it’s even more special for me to be able to share this moment with my teammates and friends who are also on the New Year’s Honours List.

“I’m incredibly grateful to be honoured with an OBE. Through sport, I hope I can continue to inspire people to push themselves whilst also making my country proud.”

Speaking about becoming an OBE after a Paralympic Games which brought her gold in the S12 100m Backstroke and a S12 100m Freestyle bronze, Hannah Russell said: “What a year 2021 has been. From training in my back garden, swimming in a static hydro pool to arriving in Tokyo, in the best shape, ready to compete at my third Paralympic Games. I am delighted that my achievements in 2021, including defending my 100m backstroke title, have been recognised. To be awarded an OBE is an honour.

“I would like to take this opportunity to dedicate it to my family, close friends and coaches and support staff at British Para-Swimming, who have provided me with endless guidance and support.”

On his honour, Performance Director Chris Spice said: “This is an incredible honour and I am extremely proud to have led our swimming team to such success in recent years, culminating in our best Olympics in history in Tokyo.

“I would like to thank our amazing athletes, coaches and support staff for a truly extraordinary time since coming into this job in 2013. We have built a team that not only believes we can win but supports each other in and out of the water whatever the outcome. Your excellence, dedication and camaraderie is second to none. That culture was on display for all to see last week as five staff worked around the clock on Christmas Eve and Christmas Day to help Max Litchfield get home from Abu Dhabi to be with his family at this important time of year.

“A leader is only as good as the team around them and I would like to thank my exceptional leadership team – Bill Furniss, Tim Jones, Dawn Peart, Adam Clarke, Tina Ryan, Matt Ashman and Sarah Gilmore – in accepting this honour as without your wisdom, patience and unwavering commitment to performance and winning in the right way, we wouldn’t be in the position we are today.”

Officer of the Order of the British Empire

Member of the Order of the British Empire

That’s great. But have they been awarded the Order of Merlin First Class?

An OBE and an MBE are 2 different things

It states the two are different quite explicitly in the Conservative Party Doner Catalogue.

These awards may look as if they are great for swimming but remember Andy Murray was made a knight for two gold medals and Katherine Grainger a Dame for 1 gold and 4 silver.
Where’s the equatity?

You think Murray was only knighted because of two gold medals? He was the first British male to win Wimbledon since 1936.

Not to mention, both have made substantial contributions in time and money to charities outside of their direct athletic accomplishments. Grainger is also the Chair of UK Sport.

Grainger became chair many years after becoming a dame

In swimming, you can win more medals at an Olympic Games swimming only 100 freestyle (four) than you can by playing tennis (three).

It’s the same with rowing (katherine Grainger’s sport): there are two “styles” of rowing (scull and sweep) with three boat classes each. Very few rowers are competitive in more than 1 boat class and practically none can both scull and sweep at the olympic level, so 1 gold and 4 silver is crazy (especially considering that she won those medals at five consecutive olympics in three different classes in both styles).

What do they get other than not paying for their marriage? ( If they ever get married).🤔

Lmao . There is no empire.

For those of us who follow the UK honors system, this is quite a big deal.
In fact, the only higher ranking member of the OBE who is involved in
aquatics, that I can recall, off the top of my head, would be
Dame Sarah Joanne Storey, DBE.

I don’t have a full list, but Maurice Watkins, who was a former chairman of British Swimming (he died in 2021), was a CBE, Commander of Order of the British Empire. That’s the 3rd class.

David Roberts, a Paralympian, is CBE as well.

Thanks!
The added names are a good catch.