USC takes on the SMU Classic this Weekend 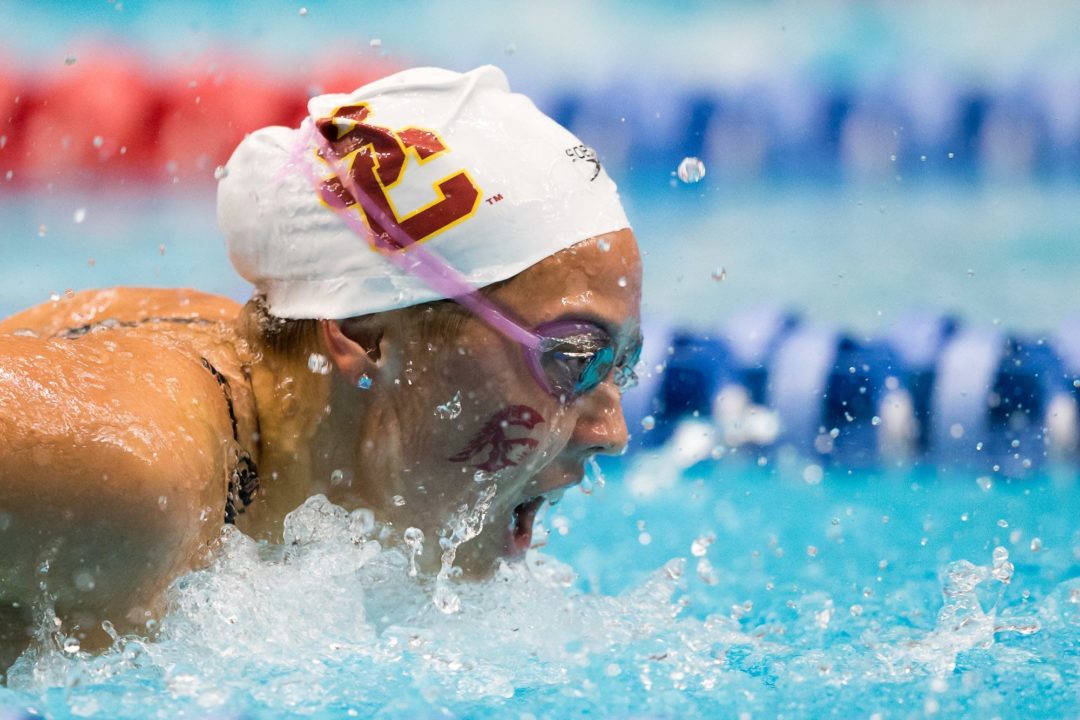 The Trojans, who opened the season with a win over Washington State last week, will look to improve to 5-0 all-time against the Beavers in Corvallis while sending eight swimmers and one diver to Dallas for the annual six-team competition hosted by the Mustangs.

The USC women’s swimming and diving team, which finished fifth at last year’s NCAA Championships and are one of only 3 teams to finish in the top 7 five straight years, will look to divide and conquer this weekend as it splits up to compete at the SMU Classic in Dallas on Friday and Saturday (Oct. 17-18) as well as at Oregon State on Saturday.

The Trojans, who opened the season with a win over Washington State last week, will look to improve to 5-0 all-time against the Beavers in Corvallis while sending eight swimmers and one diver to Dallas for the annual six-team competition hosted by the Mustangs. USC won the SMU Classic last year. The other four teams competing include LSU, Louisville, Miami and North Carolina State.

The Trojans posted a pair of NCAA ‘B’ cuts in their season-opener against the Cougars last week. Senior Andrea Kropp notched one in her specialty, the 200y breast (2:15.52) while Weiss clocked a 53.91 in the 100y back.

Stewart and senior sprint freestyler Rebecca Heyliger are the captains for the 2014-15 squad.

USC, under ninth-year head coach Dave Salo, will have to replace a trio of 2014 senior standouts in Kasey Carlson, Stina Gardell and Meghan Hawthorne. Carlson was a six-time All-American and three-time individual finalist whose 50y and 100y free and 100y breast will be hard to replace while Gardell and Hawthorne were both stalwarts in the 200y and 400y IM and the 200 breaststroke.

Among the top newcomers to the squad are freshmen Hannah Weiss, Kindle Van Linge and Alexa Cacao. Weiss is a 2013-14 Junior National team member strong in the fly and back. Van Linge is strong in the 100y fly and back while Cacao is an up-and-coming diver who won the 2014 U.S. springboard title in the 16-18 age group. Also now available is 2014 transfer Lucy Worrall, a butterfly specialist who was an NCAA point scorer for Miami in 2013 in the 100y fly.

Quintero joins Andrew and Reed Malone (no relation) as 2014-15 co-captains. Quintero, who was granted a fourth year of eligibility by the NCAA after he initially was granted three years when he enrolled, is not competing this fall but will resume competition in the spring semester.

Tribuntsov is an Estonian national record holder whose versatility can help in many events, Knox is a talented freestyler and Furtek is a Polish distance freestyler. Silverman comes to USC an accomplished Paralympian who looks to be a regular contributing member of the team despite the mild form of cerebral palsy affecting his lower extremities. Enos is a rising junior national diver while Reid is a transfer from Duke.

College Swimming News is courtesy of USC Swimming and Diving.