NCAA champion Cristian Quintero not competing for USC this fall, will return at semester, per team website 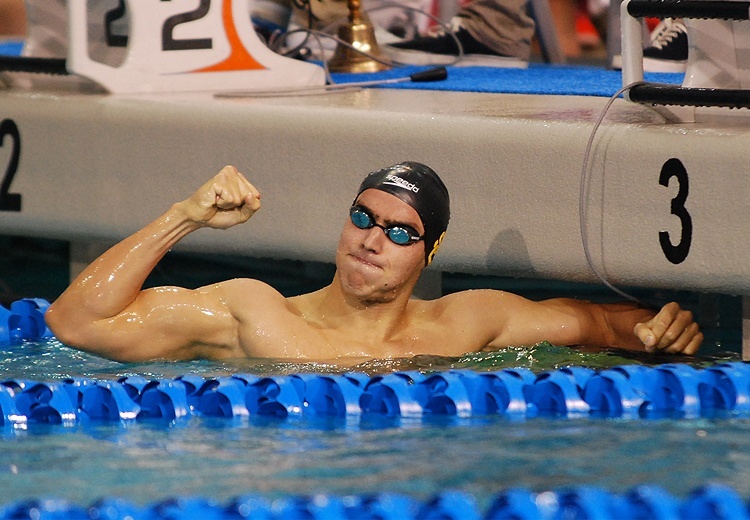 Last year's NCAA 500 free champ Cristian Quintero will not be competing for the USC Trojans during this fall semester, but will resume intercollegiate competition in the second semester, according to the school's website. Archive photo via Janna Schulze/SwimSwam.com

Last year’s NCAA 500 free champ Cristian Quintero will not be competing for the USC Trojans during this fall semester, but will resume intercollegiate competition in the second semester, according to the school’s website.

Quintero’s eligibility has had an odd back-and-forth over the past year. Quintero was originally given just three years of eligibility, with the program confirming that 2013-2014 would be his last year in the NCAA. But in July, the team announced Quintero as one of its captains, with word trickling out that he had been granted a fourth year of eligibility after further review from the NCAA.

The swing back and forth between eligible and eligibility exhausted continued in its typically quiet manner this week, as USC’s press release about its season-opening dual meets snuck in the news that Quintero would not be competing in the fall semester.

The exact wording from the press release:

Quintero joins Andrew and Reed Malone (no relation) as 2014-15 co-captains. Quintero, who was granted a fourth year of eligibility by the NCAA after he initially was granted three years when he enrolled, is not competing this fall but will resume competition in the spring semester.

There’s no word on why Quintero is sitting the fall out, just as there has been little official information given out on any of the back-and-forth movements of his eligibility over the past year.

It appears the team is still counting Quintero among its captains and clearly plans on having the freestyler back for its post-season run next winter. His eligibility status is a huge factor in USC’s hopes this season; in our college preview, we noted that Quintero could account for perhaps 80-90 points at the NCAA Championships, likely the difference between a top 15 finish and a top 6 spot.

Quintero gained notoriety last season for his unprecedented freestyle range – he was the NCAA champion in the 500 free, but is also the fastest returning swimmer in the 100 and 200 freestyles, not to mention a relay swimmer capable of a 19-low or better on the 200 free relay.

huh. interesting.
so I’m guessing we don’t know if he’s sitting out by choice or b/c of eligibility issues?
Is he going to be training with the team?

WOW, he’s got guns!! what an athlete!

let me guess it is so they can free up scholarship money…..