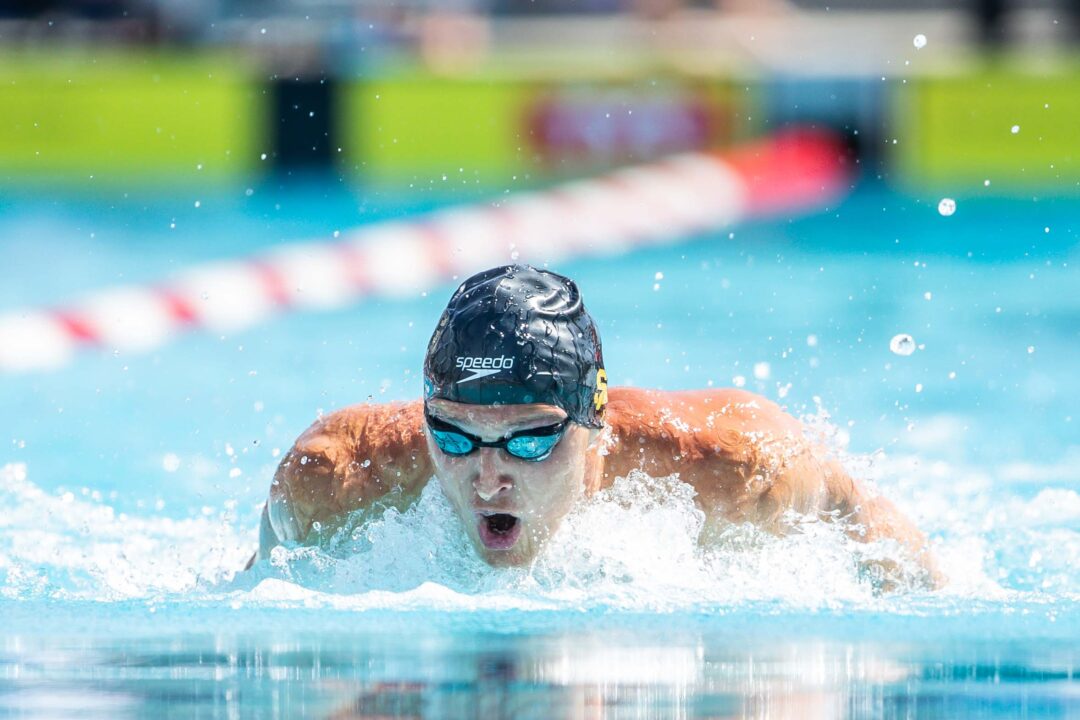 The Women of Troy swept the Tritons, winning all 14 events as Trojans Isabelle Odgers, Marlene Kahler, Aela Janvier and Justina Kozan each won a pair of individual events.

RELAY POWER:
It was all USC from start to finish as the Trojans opened and closed the meet with wins in both the 400y medley relay and 200y free relay.

LOS ANGELES – On the road at USC for a double dual meet vs. the hosts and the University of Denver Pios, the UC San Diego men and women swim squads were felled by their opponents.

The Triton women competed head-to-head with the No. 10 Trojans to finish with a score of 108 to 144. The Denver women did not compete in the dual meet.

Posting the first Triton women first-place finish, Jordan Phillips posted a time of 57.52 and was followed by Dequine and Sandy Li to sweep the 100 yard butterfly. Emma Keith-Brown took first in the 400 yard IM with a time of 4:30.24, only 0.05 seconds ahead of her teammate Sabrina Bennani.

Finishing the meet with a victory, the 200 yard freestyle relay team made up of Phillips, Wyzga, Josette Odgers, and Tina Reuter took first with a time of 1:34.65.

ON THE MEN’S SIDE
The Tritons’ first victory came in the 200 yard freestyle when Ivan Kurakin took first by 0.5 seconds. In the 100 yard backstroke, Nathan Lee posted a 50.12 to take second, only 0.17 seconds behind first. Finishing a tenth of a second behind third, Andrija Petkovic took third for the Tritons in the 100 yard freestyle.

Robby Griswold took third in the 200 yard backstroke with a time of 1:50.66. Kurakin tallied another first-place finish in the 500 yard freestyle with a time of 4:33.34, a full two seconds ahead of the next finisher. Chad Morrison took second in the 100 yard butterfly with a time of 48.88.

QUOTABLE
Battling the rain and cold, head coach Marko Djordjevic commented, “despite the weather, we still had some great performances.”

He noted Kurakin’s double wins in the 200 and 500 yard freestyle events and added, “it’s always great to see our women win relays over nationally ranked programs.”

UP NEXT
The Triton men return home to Canyonview Aquatic Center on Jan. 20 to host Cal on Friday in dual meet. On Saturday, Jan. 28, both squads will host the annual Triton Invitational.

LOS ANGELES, CALIF – The University of Denver men’s swimming and diving team picked up its third dual win of the season by defeating UC San Diego on Saturday afternoon at USC. The Pioneers fell to the host trojans in that half of the double dual.

Dylan Wright gave Denver its second win of the afternoon, finishing the 200 back in 1:48.71.

In the second distance race of the afternoon, Hancock backed up his win in the 1000 free with a second-place finish in the 500. Hancock finished the race in 4:35.44, a tenth of a second ahead of Riley Babson who finished in third.

Up Next: Denver will have next week off before heading to Air Force on Saturday, January 28 at 11 a.m. MT.