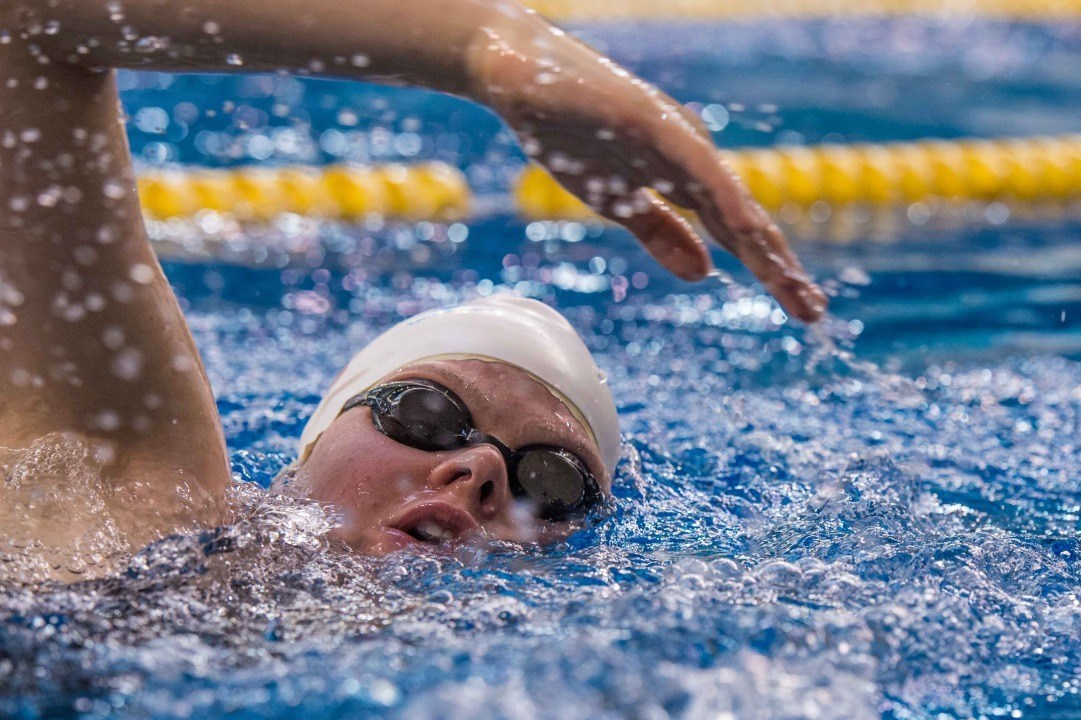 Pool records were falling left and right as the USC Trojans closed out their dual meet season with a victory over UCLA on Friday. Trojan senior Anika Apostalon was responsible for 2 of those records. Apostalon swept the sprint freestyles, setting a pair of Pool Records with her winning times of 22.08 in the 50 free and 47.78 in the 100 free. Coming in narrowly behind her in the 100 free was freshman teammate Louise Hansson, who was also under Lia Neal’s former Pool Record with a 47.99 for 2nd.

UCLA’s Kenisha Liu and Linnea Mack each took down a Pool Record and won an event for the Bruins. Liu raced to victory in the 200 free with a new Pool Record of 1:45.38. Mack, on the other hand, charged to a 51.61 to win the 100 back in record-setting time.

Senior Anika Apostalon, sophomore Riley Scott and freshman Becca Mann won two events apiece to lead the No. 6 USC women’s swimming and diving team to a 172-128 victory over No. 20 UCLA for the Trojans’ 10th straight win in the series.

USC improves to 7-2 overall, 6-2 in the Pac-12 and extends its lead in the overall series to 27-16. The teams combined to break eight Peter Daland pool records (six by USC swimmers) and lowered six meet records and tied one (five by Trojan swimmers).

Troy’s 200y medley relay of sophomores Hanni Leach and Scott, freshman Louise Hansson and Apostalon won in 1:36.30, 0.36 off the pool and meet record.

Apostalon came back after the break to ink her name into the record books again with a pool record win in the 100y free (47.78, previously set by Stanford’s Lia Neal, 48.36) while tying the meet record set by former Trojan Kasey Carlson. Hansson was also under the old pool record with her second-place 47.99.

The Trojans closed the meet with a come-from-behind win in the 200y free relay as Apostalon, freshman Tatum Wade, Moseley and Vose won in 1:29.83, edging UCLA by 0.10.

LOS ANGELES, Calif. — The No. 21 UCLA swimming and diving team completed its regular season Friday, as it fell to No.5 USC, 172-128, at Uytengsu Aquatics Center. Five Bruins recorded first-place finishes in the loss.

The Bruin A team of Linnea Mack, Emma Schanz, Katie Grover and Madison White checked in at third (1:38.81). The Trojans’ A Team picked up the win just 2.51 seconds ahead of the UCLA quartet.

Kenisha Liu gave the Bruins their first win of the day, with a personal-best time of 1:45.38. Teammates Carly Reid (1:48.63) and Michaela Merlihan (personal-best 1:48.84) finished fourth and fifth, respectively.

With a time of 51.61, Mack posted her best time of the season and a pool record. White (53.31) and Natalie Amberg (55.15) rounded out the top five, following two Trojan competitors. Amberg’s time marked a personal best.

Sarah Kaunitz posted a second-place and personal-best time of 1:01.04, while Brigitte Winkler also earned the Bruins a point, with a personal best time of 1:02.18.

In the first diving event of the day, Bruins Eloise Belanger (319.80) and Maria Polyakova (310.65) finished first and second. Annika Lenz finished fourth for UCLA, with a score of 302.40.

Mack (48.54) and Sarah Kaunitz (49.76) finished third and fourth in the tightly-contested race. Apostalon of the Trojans picked up her second win of the day. Kaunitz’s time marked a personal best.

Mann gave the Trojans her second win of the day, but Bruins occupied three of the top five spots. Verger Gourson finished second with a time of 4:49.05, Merlihan (4:51.18) posted a fourth-place finish and Lisa Kaunitz rounded out the top five at 4:53.32.

The Bruin A team of Goldsmith, Mack, Grover and White posted a time of 1:29.89 to finish second to the Trojans’ A team.

Next up for the Bruins are the Pac-12 Swimming and Diving Championships, scheduled to take place from Feb. 22 until Feb. 25 at the Weyerhaeuser King County Aquatic Center in Federal Way, Wash.

I’m with ya, great to see that swim. A season of mediocre times (mediocre for a talent like her, at least) after a serious back injury, makes you fear the worst, especially for a distance swimmer. But 15:52 is no joke.