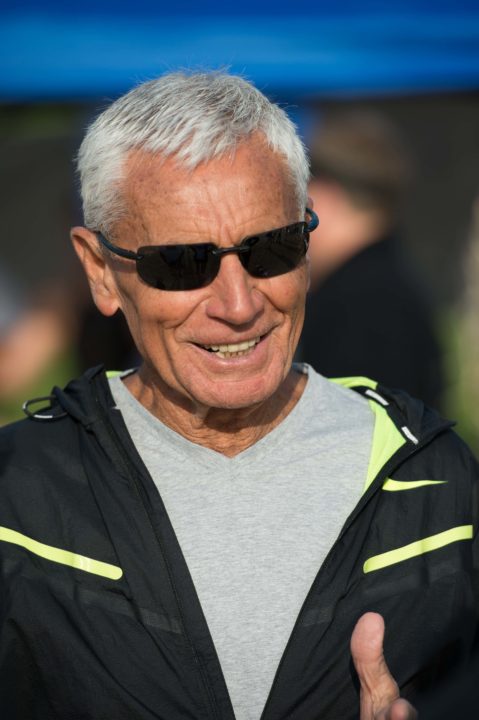 Former University of Michigan men's swimming and diving coach Jon Urbanchek will be inducted into the Athletic Department's Hall of Honor at a private ceremony on September 30th... Current photo via Mike Lewis/Ola Vista Photography

Urbanchek joins University of Michigan swim coaches Gus Stager and Matt Mann along two athletes who he coached, Brent Lang and Gustavo Borges, in the Hall of Honor

Below is part of the press release sent out by the University of Michigan Athletic Department:

Urbanchek was the head coach of the men’s swimming and diving program from 1982-2004. He guided the Wolverines to the 1995 NCAA championship and 13 Big Ten titles in 22 seasons. The program won 10 straight conference championships from 1986-95. Overall his teams were 163-34 in dual meets with a 100-4 mark against Big Ten competition.

A member of the International Swimming Hall of Fame and State of Michigan Sports Hall of Fame, Urbanchek had 26 swimmers at Michigan represent their countries at the Olympics with 10 individuals combining for 17 medals. He served as an assistant coach for USA Swimming at the 1988, 1992, 1996, 2000 and 2004 Olympic Games and was a special assistant in 2008 and 2012. He also coached the 1994 and 1998 U.S. World Championship teams.

Urbanchek is one of the most highly respected coaches in United States Swimming history. His profile in the International Swimming Hall of Fame it reads:

Wherever he goes, honors follow him. As a coach, his swimmers hold him in high regard and his opponents treat him with respect. History has looked kindly on this man who has spent almost 50 years pacing the pool deck developing and training the world’s best swimmers

After retiring as Michigan’s head coach, Urbanchek coached for Club Wolverine from 2004-2009 before taking over the United States Swimming Post-Graduate Elite training group at the Fullerton Aquatics Swim Team (FAST) from 2010-2012.

Although Urbanchek is being honored by the University of Michigan as a coach he was also a member of the school’s NCAA championship teams in 1959 and 1961.

Jon is the man!

Most deserved. An innovator with his Colors protocols, a genius with helping swimmers discover timing, pace, gears of intensity. His work in this area a source, too, for people like Fabrice Pellerin with his musical playlists and tempo workouts.

Way before being a Wolverine, Jon was a Colonist- coaching at Anaheim HS- back in the dark ages- when I first met him, as a really skinny kid.
Wonderful accomplishments for a great guy.

I think they were just listing Michigan Olympic MEDALISTS….otherwise, the list would be MUCH longer.

Congrats- I too appreciate the nuances of a nicely woven basket!!

The Great Urbie! Congratulations and “Keep it Moving”!