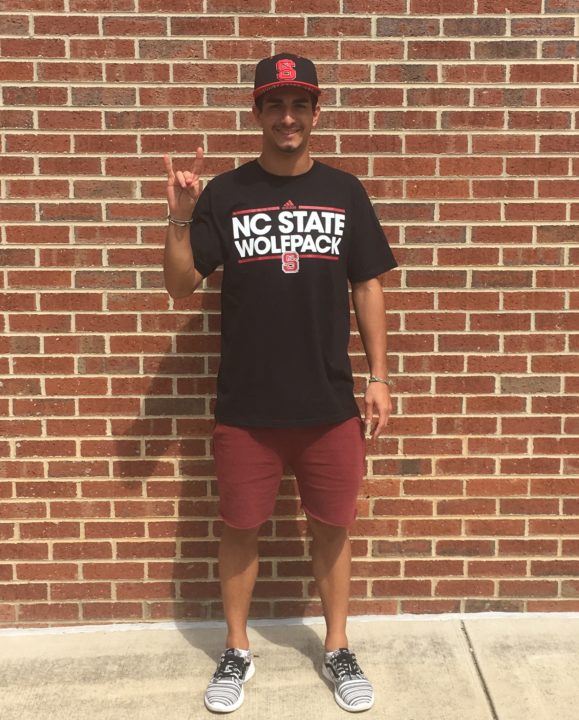 The famed Wolfpack sprint group will get even stronger next year, as Italian sprinter Giovanni Izzo has made a verbal commitment to join the North Carolina State men’s swimming and diving team beginning in the fall of 2017.

Izzo, who swims for Imolanuoto, finished 2016 with the #1 worldwide ranking for juniors (men born in 1998 and later) in the 50 free, having gone 22.09 and won the event at the 43th Arena European Junior Swimming in Hodmezovasarhel, Hungary on July 10. That represents a drop of 7/10 in a year, given that Izzo finished third at the 2015 FINA World Junior Championships in Singapore with 22.78.

His times this summer include:

Had Izzo swum at the 2016 ACC Championships and gone his best times converted, he would have qualified third for finals in the 50 free behind only NC State Olympians Simonas Bilis and Ryan Held, and would have come in 3/10 ahead of teammate Joseph Bonk. In the 100 free he would have qualified seventh, and been the fifth NC State swimmer in that A final. His 100 fly would have given him a second swim as well, this time in the C final.

NC State’s recruiting efforts have already paid off handsomely this season. In addition to Izzo, the Wolfpack have received verbal commitments from Daniel Forndal, Luke Sobolewski, and Ray Van Deusen.

There is one down vote on every comment, at least that person is consistent in their hate towards NC State.

Wow how about such good recroot. I cannot beleve how many such good recroots NC State keep get so early in the seeson. So much excited for this Decission. No doubt that he will get got fastest. This will shirly make a STATEment.

What school did you attend? Guessing UNC? Seems like some poor English on purpose, and your posing as a Wolfpack fan.

Very interesting choice from Giovanni Izzo (01/01/98 his birth date)
Always difficult to preview what may happen in Ncaa for an Italian swimmer, but Izzo has a great natural speed (he is under 1.80m ) and good versatility (also good flyer and breaststroker),
So, considering how much have been improving NCState sprinters in the latest years, Izzo in the Ncaa could be a very great story to follow.

NC State had a great success with another Italian in the past, Jonathan Boffa. I wonder if they know each other.

Yes, I think so.
Jonathan Boffa is now swimming for Canottieri Aniene and in this season has been part of Italian relays at European Champ: nice freestyler.

He has another year of high school and he is already that fast? wow!

He may not be 17, the way international recruits work is different than American ones

So NC State has 4 guys already? It’s early September… Those coaches are good in this recruiting game. Who is their main recruiting person?

I’d honestly be surprised if he didn’t get to sub 19. NC State has a habit of improving their swimmers by significant amounts

Did the Greek swimmer join the team? Didn’t see him on the roster for this year!

Olympics postponed start I’m guessing on the Greek. NC state with 4 very solid recruits so far. Not sure why anyone is suprised at this point. Clearly a top 5 program if not top 3

Agree with you. Very solid is an understatement.

Vasaliki Baka is the sprinter from Greece that joined this year. Great pickup for the PACK.

She is on the roster. Was thinking about Andreas Vazaios

I seem to recall that he is a bit older and there is some question about how many years of eligibility he will have.

Whoops yes- was thinking about Andreas too.

Also does this guy beat out Luke Percy for fastest long course swimmer transferring to NCAA?

It did not do Luke any good at all.