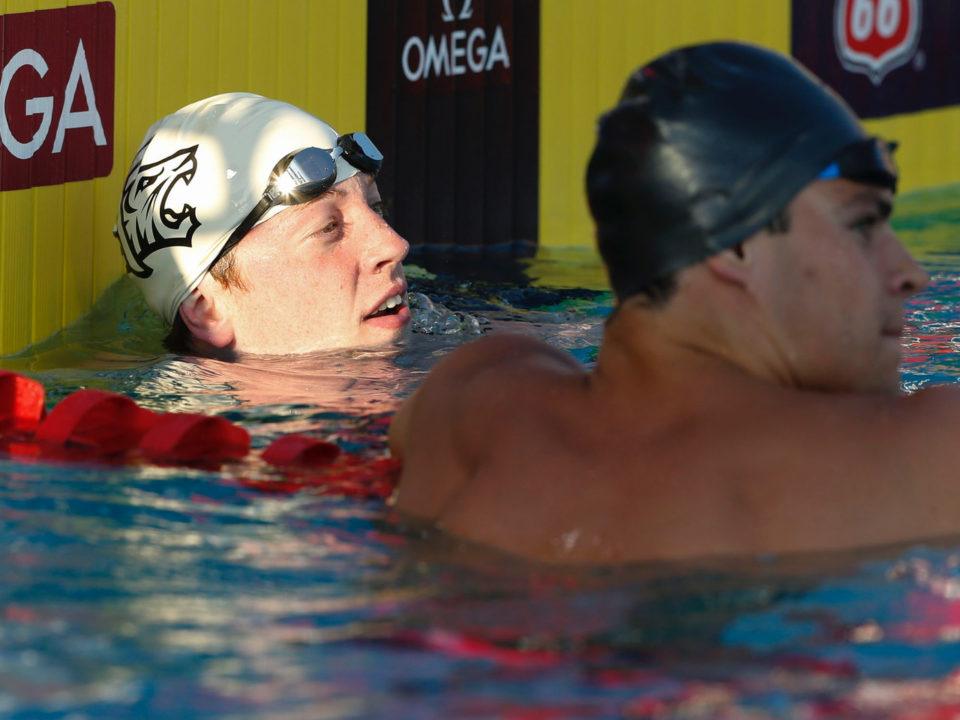 Jack Saunderson of Wolfpack Elite will race against the top finishers from NC State, Virginia Tech, UNC, and Duke in the 100 fly final tonight. Archive photo via Towson University

Tuggle posted a statement on Instagram speaking out on gun violence in light of the recent shooting at her school that killed three UVA football players.

INdiana sophomore Anna Peplowski racked up three individual wins at the meet (100 back, 200 back, and 200 free) and six total victories including relays.

Tonight kicks off the first finals session of the Janis Hape Dowd Invitational in Chapel Hill. Follow along for live updates as the University of North Carolina, NC State, Virginia Tech, Duke, and Wolfpack Elite battle it out.

Senior Victoria Fonville lead off the winning relay in 22.54, but it was junior Kylee Alons who clocked the fastest 50 split in the field of 21.31. Senior Sirena Rowe took over the 3rd leg in 21.48, and sophomore Heather MacCausland anchored the relay in 21.67.

It was a tight race for the top 3 spots here, with all relays within .67 of each other. Though ultimately, NC State claimed their 2nd win of the night.

Sophomore Noah Henderson started off the NC State A relay with a 19.92, handing it off to fellow sophomore Hunter Tapp who finished his leg in 19.19, the fastest split in the event. Senior Luke Sobolewski kept the momentum going by posting a 19.41 on the 3rd leg, while freshman Luke Miller took it home in 19.56.

UNC was close behind as senior Jack Messenger lead off their relay in 19.69, which would have been the fastest lead-off split if it weren’t for Virginia Tech freshman Youssef Ramadan who split a 19.68. Senior Tyler Hill picked up the 2nd leg of UNC’s relay, splitting a 19.38 before handing it off to junior Tomas Sungalia who swam a 19.56. Senior Eli Coan anchored the relay with a time very close to NC State’s anchor, 19.61

Senior Kate Moore was the top seed going into finals, by a significant margin of 7 seconds. She added slightly to her best time, 4:37.94, which she swam in prelims, despite taking it out almost exactly as fast as she did this morning and splitting a 53.16 on the first 100 yards.

Virginia Tech freshman Chase Travis made up the most ground here, going from 4th seed to 2nd place and dropping nearly 3 seconds from her prelims time. In 3rd place, freshman Yara Hierath dropped another 1.5 seconds, after dropping 12 seconds from her best time in this event during prelims.

Alons struck again, taking 1st place and replicating her school record-breaking prelims swim nearly to the hundredth of a second. She split a faster first 50 tonight, 24.15, but brought it home slightly slower on the back half which resulted in a .04 second add overall.

Freshman Abby Arens defended her 2nd place rank from prelims after a close race with Bailey Nero. Arens out touched her by .12,  adding slightly to her best time from this morning.

Junior Antani Ivanov overcame a few things here to secure some major points for Virginia Tech. First, he was ranked 6th going into finals. Then, there’s the fact that he touched the wall in 7th place at the halfway mark.

Look at these splits: Wolfpack Elite’s Jack Saunderson actually clocked the fastest 50 fly (21.42) while Sobolewski turned at 21.69. Even Virginia Tech’s duo of Youssef Ramadan and Blake Manoff who tied for 4th split a 21.67 and 21.65 on the first 50, respectively. Ivanov split a 22.07, sprinting the last 50 yards in an impressive time of 24.11. This was .40 faster than Sobolewski and .70 faster than Saunderson.

Senior Eric Knowles overthrew the top seed, and his teammate, Ross Dant with a one-and-a-half second time drop from this morning. They were neck-and-neck the whole way, with Dant taking out the first 100 slightly faster in a time of 48.71. Knowles finished the last 100 yards in 50.59 seconds, .34 faster than Dant’s split.

UNC senior Dimitrios Dimitriou dropped over 5 seconds from prelims to jump from 5th place to 3rd, touching the wall ahead of NC State’s James Plage and preventing a NC State sweep. This was a big swim for Dimitriou who already shaved 2.4 seconds off of his best time during prelims.

The tightest race was between sophomore Heather MacCausland who out touched 4th place finisher Bailey Nero by one-hundredth of a second. Nero’s first 2 50’s were significantly faster than MacCausland, but MacCausland made it all up with breaststroke and freestyle splits each about one second faster than Nero.

Despite following up a 2.4 second time drop this morning with an even faster swim, junior Cole Reznick was out touched by Wolpack Elite member Paul Le who was seeded 8th going into finals. Tonight, Le set the pace fast, splitting a 22.54 on the 50 fly and 26.08 on the back. He lost some ground on the breast and free, splitting a 30.98 on the breast compared to Reznick’s 30.60, and a 25.96  on the free compared to Reznick’s 25.51. But it wasn’t enough. Freshman Mikey Moore snagged 3rd place for NC State, right on the best time he swam this morning.

After leading NC State’s 200 free relay to victory earlier, Rowe and Fonville finished 1-2. Rowe swam faster than she did in prelims to overthrow top seed Fonville, but it was still not a best time. For Fonville, this swim was .03 seconds faster than her relay lead-off split tonight.

Sophomore Sarah Shackleford nearly snagged 2nd place for Virginia Tech, as she swam right on her best time that she posted this morning, but was still out touched by Fonville. Shackleford also swam faster here than on her 200 free relay lead-off leg, by .15 seconds.

All three men posted faster times here than they swam this morning, most significantly senior Tyler Hill who cut .42 from his prelims time to out touch freshman Youssef Ramadan.  Michael Chadwick claimed 1st place by a  larger margin tonight than he did in prelims, touching the wall .30 ahead of Hill.

Both Hill and Ramadan raced this event earlier on UNC’s A relay and Virginia Tech’s A relay respectively. Youssef beat his 200 free relay lead-off leg from earlier by .06 seconds. Hill, with the benefit of a relay start, posted a 19.38 on the relay.

The NC State women secured 1st by a significant margin of 5.6 seconds. The team consisted of the top 2 finishers in the 100 fly tonight: Abby Arens on butterfly, splitting a 51.61, and Kylee Alons on freestyle, splitting a 47.67. Sophomore Katharine Berkoff lead off the relay with a 50.47 on backstroke, and senior Olivia Calegan split a 59.71 on the breaststroke leg. Calegan was the only swimmer in the field to get under the 1 minute mark and Berkoff’s 100 back split would have placed 5th at the DI NCAA Championships in 2019.

Junior Grace Countie lead off the UNC ‘A’ relay with a 53.61 in the 100 back, while junior Lilly Higgs split a 1:00.30 on the breast. Following her 4th place finish in the 100 fly earlier, junior Sophie Lindner closed the gap a bit with a 52.35 split on the fly leg, and junior Heidi Lowe finished strong with a 48.80 on the freestyle.

Virginia Tech freshman Emma Atkinson lead off their ‘A’ relay with a lifetime best 100 back split of 52.03. Atkinson, one of the top 20 recruits of the high school class of 2020, swam her previous best time, 52.52, in October at the Virginia Tech Hokies’ Belt Challenge.

NC State’s Sobolewski got to swim the 100 fly for a 3rd time today as part of the winning relay. He posted a 45.91 after taking over from teammates John Healy on backstroke (47.58) and Jack Moranetz on breaststroke (52.98). Sophomore Hunter Tapp anchored the relay in a 100 free split of 41.90.

NC State posted the fastest relay splits in the field, except for the 100 back. Virginia Tech sophomore Forest Webb posted  a 47.23 on his 100 back lead-off split, gaining speed on NC State’s Healy. He handed it off to sophomore AJ Pouch who swam a 53.31 on the breaststroke leg. Antani Ivanov also swam the 100 fly 3 times today, posting a 46.16 this time on the relay. Blake Manoff took over the freestyle leg, touching the wall in 42.64.

You gotta do Bradens laundry for 3 months

Focusing more on your swimming rather than the media. But maybe that’s just me

Why do some peoples’ names have bold red and others normal red on swimswam articles?

VT freshman Emma Atkinson swam a best time in the 100 back going 52.03. She’s setting herself up to be a real threat at ACCs and NCAAs.

Chase is a STAR

Keep it up Hokie!

Who were on UNC/VT relays? The results link is still showing results from a dual meet a few weeks ago.