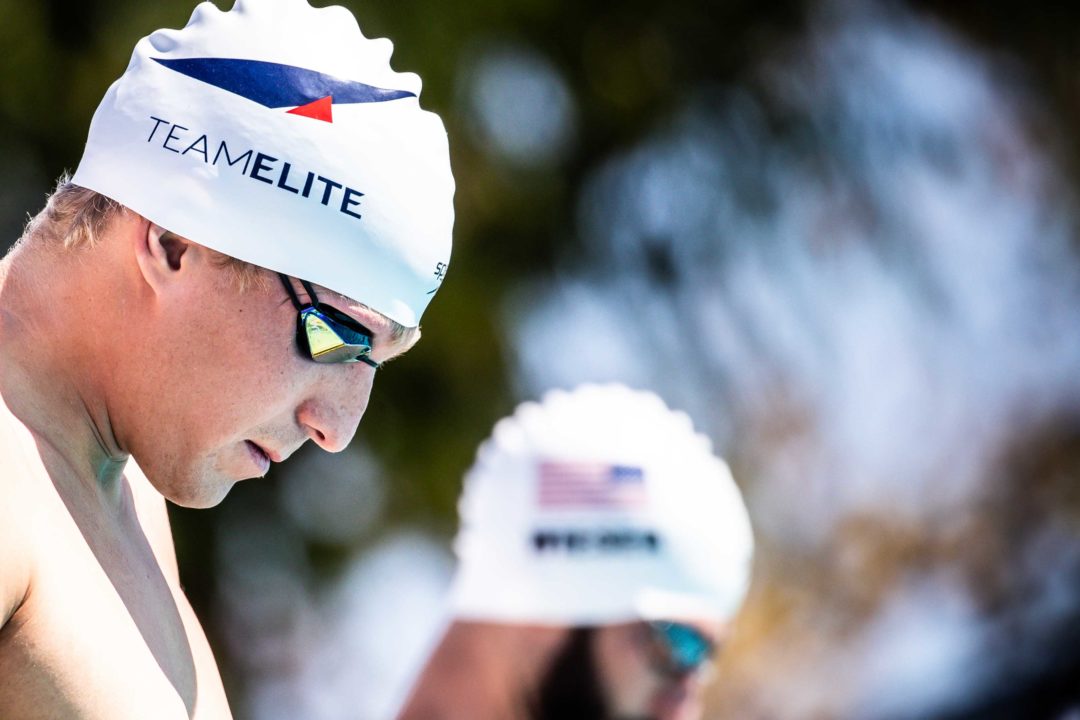 Reed Malone, who made back-to-back US National Teams from 2014 through 2016, has announced his retirement from competitive swimming. Archive photo via Jack Spitser/Spitser Photography

The 25-year old former USC Trojan was a member of the USA Swimming National Team from 2014 through 2016 as a middle distance freestyler.

Malone says that a number of factors led to his decision to retire just 4 months before the upcoming Olympic Trials, including an injury.

“There were a few factors. I had been swimming through a pretty bad shoulder injury and just hoping to hold out until Trials. And I was doing that because for a long time I had the mindset that if I didn’t make an Olympic team, my career was a failure. And swimming wasn’t fun anymore because it didn’t feel good and I wasn’t having fun because of all the pressure I put on myself. Plus with this pandemic who knows if the Olympics will even happen!

“But I came to realize that that line of thinking was backwards and wrong. I didn’t really value the awards I got, I mostly valued the people I met and experiences I had. Honestly, I think that is why I was such a better relay performer than an individual. And those people and experiences are what make my career a success, not any more accolades.

“So that realization along with some injuries and some pretty lackluster performances are what went into that decision.”

While an undergrad at USC, he was named the program’s first ever three-time captain. He was also a six-time All-American and a Pac-12 Champion in the 200 and 500 yard freestyles.

His highest individual NCAA Championship finishes were back-to-back bronze medals in the 500 free as both a sophomore and a junior.

Internationally, he was a member of the 2015 US team for the World University Games, where he earned gold in the 200 free and 800 free relay, plus bronze in the 400 free. That same year, he swam as part of the prelims and finals 800 free relay for the Americans at the 2015 World Championships that won a silver medal.

In spite of the awards, in his retirement announcement, Malone said that the people he met in the sport are what he is most grateful for.

Today I am announcing my retirement from swimming. I’ve spent time reflecting on my tenure in the sport and I am sincerely most grateful for the people I was fortunate enough to meet and call my friends. Accolades and medals are cool, but the experiences shared with those I care about are what I will cherish most. I didn’t enjoy swimming half as much as I enjoyed the times spent with you all and if I reciprocated even a fraction of that impact, I would consider my career to be a resounding success. Thank you all so much!!

His last pre-coronavirus meet was a French Golden Tour meet in Nice in February. He’s swum only three official races since quarantines began to lift. He entered the 200 free (1:54.99) and 400 free (4:01.53) at the US Open site in Irvine, California in November, and then finished his career with a 1:57.66 long course 200 free in a time trial meet in December.

Malone ended his career training with David Marsh’s Team Elite group based out of San Diego.

This guy won me a lot of money in fantasy swimming leauges while at USC. Thank you Reed, and here is to a great career!

I appreciate everything Reed has done to help me over the past several months through their mentorship program. I give him credit where it is due.

As someone who swam with Reed for 4 years, have to say that no one else I met in this sport is as gentle, kind, and supportive of everyone around them as Reed is. Congratulations on an incredible career Reed! You were an amazing teammate to all of us for the entire journey.