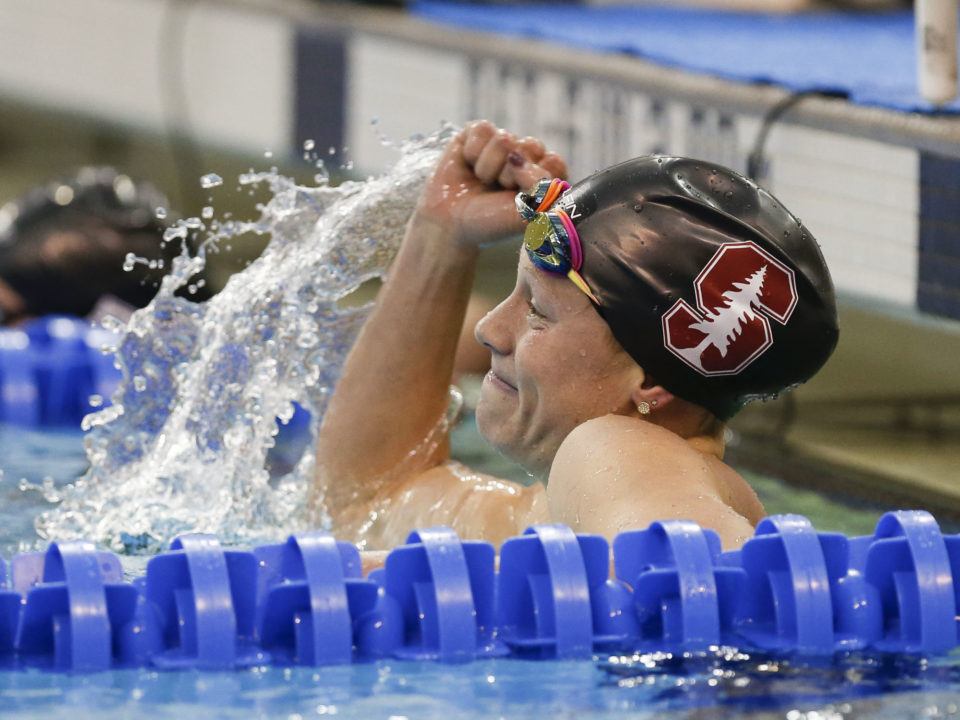 The women’s 200y IM on Day 2 of the 2018 NCAA D1 finals was set to be an exciting race, as the field was comprised of a faster heat than last year - a 1:55.59 guaranteed a spot in last year’s final, but it took a 1:54.78 to qualify for the A-final this year. Current photo via Tim Binning/TheSwimPictures.com

Smack Strap is a braided elastic replacement goggle strap designed to reduce pressure from the straps while ensuring goggles are comfortable and water tight.

Reigning NCAA champion Kathleen Baker (Cal) was back to defend her title, going up against NCAA record holder Ella Eastin (Stanford) and top-seed Sydney Pickrem (Texas A&M). We saw a preview of what a race between Eastin and Baker would look like as they battled it out in their prelim heat, Eastin out touching Baker by half a second, landing her in 2nd seed. Also in the final are Wisconsin’s Beata Nelson, Tennessee’s Meghan Small, Texas A&M’s Bethany Galat, Denver’s Bailey Andison, and Kentucky’s Asia Seidt.

Baker had a powerful start, leading the race from the get-go. Eastin matched her stroke rate at 1.04 seconds per stroke cycle -s/strc(58 stroke cycles per minute – strc/min) in the first 50, but Baker had a higher stroke index (Speed x DPS x cycle multiplier), which means she pulled more efficient strokes: her DPS was significantly higher at 1.98 metres per stroke -m/str to Eastin’s 1.68 m/str. Baker finished the butterfly leg with a split of 24.23 s, followed by Eastin at 24.59 s. Small, who had a higher stroke index than Eastin, but pulled at a slower rate came in third at 24.67 s.

Seidt started to close in on Baker and Eastin in the 2nd half of the backstroke leg, pulling at a slightly slower stroke rate of 1.43 s/strc (42 strc/min) to Baker’s 1.32 s/strc (45 strc/min) and Eastin’s 1.36 s/strc (44 strc/min), but with greater efficiency (higher stroke index) in each stroke. Seidt’s DPS was significantly greater; she pulled 0.11 m farther per stroke (0.22 m cycle) than Baker. Seidt clocked in the fastest backstroke split with a time of 27.29 s, but this was not enough to knock Baker off the lead.

Eastin and Baker pulled ahead of the field off the breaststroke pullouts. Baker’s stroke rate and DPS stayed fairly consistent in both laps of the breaststroke leg, while Eastin pulled at a faster stroke rate but dropped DPS from 2.08 m/str to 1.83 m/str on the 2nd half. Baker’s longer strokes pushed her farther ahead, increasing her lead to half a body’s length coming into the wall for the final leg. Meanwhile, Pickrem, who came in 5th after the backstroke leg, came into the running for a podium finish with a high DPS of 2.18 m/str on the first half and increasing it to 2.32 m/str coming back.

As they charged into the final stretch of the IM, Eastin caught up to Baker, swimming at a speed of 1.67 metres per second – m/s, compared to Baker’s speed of 1.58 m/s. Eastin beat Baker to the final turn by a tenth of a second, driving into the wall with a slower stroke rate of 1.26 s/strc (48 strc/min) but with a higher stroke index and increased speed; This was the same strategy used by Pickrem, who maintained her position in 3rd place with the second fastest freestyle split. Baker dropped her DPS significantly in the final 25, putting her almost half a second behind Eastin.

Despite Baker taking the lead in three-quarters of the event, Eastin followed through with a stronger finish, smashing her standing NCAA and American records with almost a full second drop, clocking in at 1:50.67. Baker finished at 1:51.25, also under the existing record.

A key takeaway from this race is the importance of finding the balance between stroke rate and stroke index, especially in an IM event, where the middle ground differs for each stroke. While longer, more efficient strokes are ideal, this can be a disadvantage if the turnovers are too slow. For instance, though Pickrem’s stroke index fell in the higher range throughout the race, this wasn’t enough to offset her consistently slower stroke rate. If she was able to increase her stroke rate from the beginning, without dropping stroke index too much, she wouldn’t have had as much distance to catch up on in the second half of the race.

We’re only halfway through the 2018 Women’s NCAA Championship, and more thrilling races are sure to come in the next two days! Stay tuned for more race analysis!

Thanks for your observation! We agree, there were several places throughout this race where had Baker been a little tighter on technique should would have maintained a bigger lead heading into the end, which may have saved her from a second place finish.

Still a solid under record pace finish though, and lots to learn form for next time!

Not one mention of Eastin’s vastly superior underwaters on the final 50? I feel like that was the biggest difference in this race.

While this was a contributing factor, it was only part of the story. Baker employed an inefficient stroking strategy on the first three legs of this race, not reserving enough energy to bring it home. She actually had far superior underwaters for the majority of the race, but ran out of steam when it counted.

Conversely, Eastin employed a more strategic, consistent strategy across the entire race. So she had the power to pull out the superior underwater, and overall stroking in the final leg, to takeover the lead and secure the win.

TAMUSwim posted a pretty good video of this race, you can find it here: https://youtu.be/jgzh1Ilx1nI