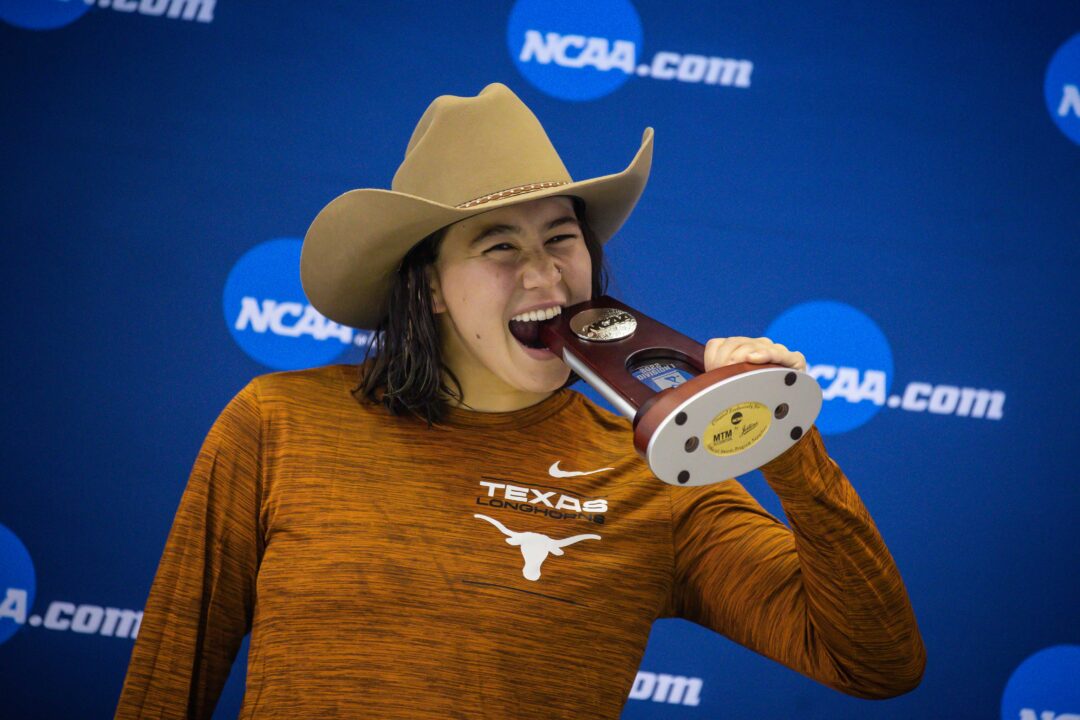 Sullivan is currently focused on getting back to her pre-injury speeds, aiming to get her 1500 splits back to Tokyo times. Archive photo via Jack Spitser/Spitser Photography

Erica Sullivan has been busy the past couple of years, from winning the silver medal in the 1500 free at the Tokyo Olympics to finishing up her first year of college at the University of Texas. Also in that time, she’s gone through ups and downs: she suffered a shoulder injury that prevented her from swimming in the U.S. International Team Trials in 2022, but she got into her desired major (radio-television-film) at the Moody College of Communication.

This Team Speedo athlete sat down with the SwimSwam podcast to talk everything big and small, from her recent injury to her favorite TV binge.

Even though Sullivan’s injury took her out of the running for trials, she said she’s now healed to the point where she’s back in the weight room and trying to recover from her lack of training over the past two-and-a-half months. In addition, she’s building her aerobic base and trying to lower her splits from mid-33s in the 1500 to low-31s, similar to her splits in Tokyo.

Despite winning the 1500 at the Mission Viejo Pro Swim Series and coming 2nd in the 800, Sullivan said she’s still not satisfied.

“I just hold myself to a really high standard,” she said. “I’m aware that my splits need to be a lot more sharp.”

Prior to her injury, Sullivan has also had to transition from a club team that she said prioritized swimming almost exclusively to collegiate swim team where she also had to simultaneously focus on her education.

Sullivan said she had to learn how to also focus on school over the past year, but that Carol Capitani, the women’s swimming and diving coach, helped cultivate a sense of team in the pool.

“Carol is really gung-ho about team culture, the kind of person you are, and the energy you bring to the pool deck,” Sullivan said. “Carol’s so caring and understanding with her athletes, including myself, but knows when they need to be pushed, which is a very rare combination to have in coaches nowadays.”

Sullivan credits some of her amazing memories to her experiences in the professional world of swimming, spending the past few years competing on the international scale after initially graduating high school in 2018. Her Make Waves moment, for example, was the 2019 World Championships, after she had already experienced the international world of swimming as a newcomer and had the chance to find a group of people she belongs with.

“I feel like my first [Team USA trip] at PanPacs, I was just the newbie and I didn’t fit in,” Sullivan said. “But by the time round two rolled around that next year at Worlds, it was really something. I got super close with Ashley [Twichell] and Haley [Anderson] that year with open water, and all the veterans. Even now, getting to text Ashley after she had her newborn boy was absolutely crazy.”

From Pool to Screen

Though Sullivan has plenty of time to get back on the track she wants in swimming, long-term her focuses are out of the water and on the screen. She said she’s wanted to work in the film industry ever since high school, when she watched “Lady Bird” for the first time, and she’s pretty set on writing and directing coming-of-age movies.

“I love female-centric coming-of age films,” she said. “No matter what, I can leave that movie feeling seen and heard, and thoroughly enjoyed watching.”

Sullivan said she created a short-film to apply for the radio-television-film major at UT. She also wrote a full film during the pandemic. She said that she doesn’t want to touch her full-length film yet, because it’s something she wants to be able to direct.

She’s currently focused on writing, though, which Sullivan said might be harder than swimming.

“At least with swimming, you have some sort of awareness that you’re getting better,” Sullivan said. “But I feel like with writing it’s just page after page after page, and you do not see an end, and it takes a couple months to write out a movie. By the time I finished writing [the film], I did not want to look at it for a few months, I did not want to think about it, and in that sense it’s definitely harder than swimming.”

Sullivan said she wants to settle in Austin, New York, or Los Angeles, and her ultimate goal is to get the movie studio A24 to fund one of her films.

As for content other than her own, Sullivan calls herself a binger, and that she’s currently obsessed with Season 2 of Amazon Prime’s “The Wilds” and hopes to binge Part 1 of Season 4 of “Stranger Things” soon.

As she works on her budding film career and builds her strength back up in the pool, Sullivan is also raising money for LGBTQ advocacy and support. June is Pride month, and as one of the most recognizable out swimmers and one of the only openly gay swimmers to medal at the Olympics, Sullivan said that she wanted to be a role model for younger athletes because she did not see much LGBTQ representation when she was growing up in the sport. She is currently raising money for Out Youth Austin via a GoFundMe campaign available on her social media.

Out Youth Austin supports “the physical, mental, and emotional well-being of sexual minority youth in Central Texas so they can openly and safely explore and affirm their identities,” according to Sullivan’s campaign page.

Many thanks to our partner Speedo.

the mother i never had, the sister i always wanted. i don’t know a better person

Great podcast – I didn’t know much about her before. Really interesting.