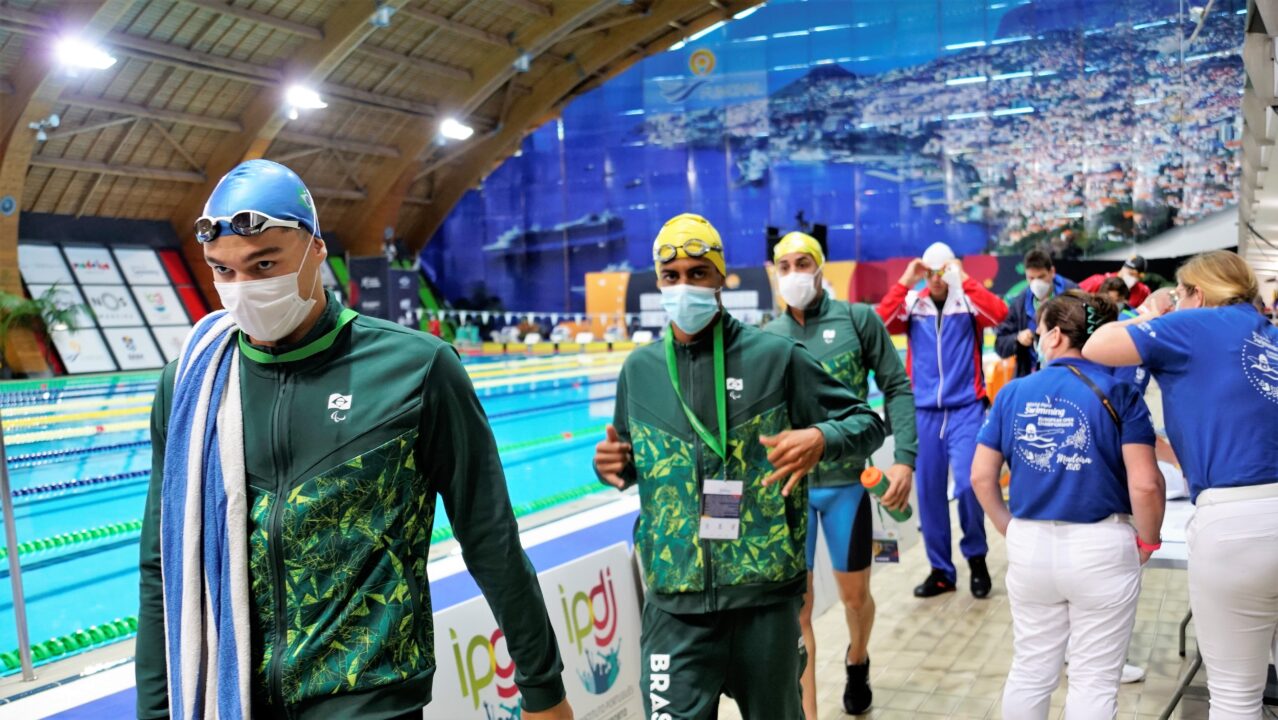 Gabriel Bandeira broke the 200 IM SM14 world record to win his second gold medal of the meet and close the gap between the U.S. and Brazil in medal standings Archive photo via he International Paralympic Committee

Day five of the World Para Swimming Championships was a thunderstorm of four world records and four continental records.

The world record was broken twice in one event in particular: the men’s 50 free S4. First, New Zealand’s Cameron Leslie swam the fastest time in prelims, 36.75, to break his own world record from April by .27. But he had to answer to Israel’s Ami Omer Dadaon in finals who dropped more than 2 seconds from his prelims time to touch the wall first at 36.25, a new world record. This was 21-year-old Omer Dadaon’s second gold medal of the meet and he now holds three para-swimming world records. In finals, Leslie also broke his world and Oceania records from prelims with a 36.71 to win silver.

Then in the men’s 200 IM SM14, Gabriel Bandeira of Brazil crushed the world record, previously set by Great Britain’s Reece Dunn at the Tokyo Paralympics, by more than half a second. Bandeira touched the wall at 2:07.50 with a 2.5 second lead over the field to win his second gold medal of the meet.

Brazil now has a total of 41 medals compared to the United State’s 26. The one thing maintaining the Americans’ lead is that they have one extra gold medal, but Brazil has 4 more silvers and 12 more bronzes, so it would not take much for them to overtake the U.S. in the coming days of competition. Bandeira’s world record swim certainly helped, as did Maria Carolina Gomes Santiago winning her 4th gold medal of the meet in the women’s 100 freestyle S12 (59.62). Gabriel Silva de Souza also won gold for Brazil in the men’s 50 freestyle S8 (27.19).

There were five women’s 50 freestyle events today, separated by classification, and two of them had world record swims. USA’s Leanne Smith dominated the women’s 50 freestyle S3, winning the race with a world record time of 40.32, more than 8 seconds ahead of the field. She tied the previous mark set by Italy’s Arjola Trimi in Tokyo. This is Smith’s 4th gold medal of the meet – she’s won every individual event that she has swum and was part of Team USA’s world-record-setting 4×50 mixed medley relay on day three.

“I just set out really looking forward to having the opportunity to swim races that haven’t been offered in the lower classifications before,” Smith said in a Team USA press release. “We switched up my training to accommodate all of my events that I’m racing this week. It has been a tall task to get through all my training that way, but I think we prepared well, and I’ve been able to come here and execute as one could only dream of.”

The U.S. placed well today to maintain their 2nd place spot in medal rankings. These swims included Anastasia Pagonis winning the women’s 100 free S11 (1:06.87). This was her second gold medal of the meet and she still has her world record-holding event on Saturday, the 400 free S11. Liesette Bruinsma of the Netherlands, who set the world record in this event in 2018 at 1:05.14, won silver today in the 100 free S11 behind Pagonis (1:07.90). Bruinsma will also go up against Pagonis in the 400 S11 event, but after today, the 18-year-old American is feeling ready.

“I wasn’t expecting that tonight out of myself, so I feel really confident going into the 400,” Pagonis told Team USA. “I was a little bit nervous originally since it was the last day, but now that I’ve swam a good 100, I’m feeling really excited and confident.

On the medal table, Ukraine jumped up 3 spots to 5th place, bumping the Netherlands down to 6th, after 18-year-old Anna Hontar of Ukraine won the women’s 50 free S6 with a world record time of 32.75. She cracked the previous record set by her teammate Yelyzaveta Mereshko in 2018 by .03. This was her third medal. This event also had the youngest medalist of the session, Sara Vargas Blanco of Columbia who won bronze (33.34) at 15 years old. Ukraine also had a 1-2 finish in the men’s 50 freestyle S13 by Oleksii Virchenko (24.03) and Kyrylo Garashchenko (24.35). Notably, this event was missing world record holder Ihar Boki of Belarus since FINA banned all Belarusian and Russian athletes from competing at Worlds.

Australia jumped from 10th to 7th on the medal table after day five following a victory in the women’s 50 freestyle S13 by Katja Dedekind. The 20-year-old touched the wall with a new championship record time of 26.98. The Aussies also won the mixed 4×50 medley after a tight race with Spain. Their team of Timothy Hodge, Keira Stephens, Emily Beecroft, and Matthew Levy won gold with a time of 4:29.86. 18-year-old also Col Pearse led a 2-3 finish in Men’s 100 butterfly S10 with an Oceania record time of 57.17, winning his second silver medal of the meet. 16-year-old Alex Saffy joined him on the podium in 3rd (58.20).

Italy is still dominating the medal table with a staggering total of 42 medals and counting. Italy’s Stefano Raimondi started the chain reaction of championship record swims in the men’s 100 fly S10 which was the first of six championship records to fall on day five. He won his 4th gold medal of the meet with a time of 54.67, beating defending Paralympic champion Maksym Krypak of Ukraine’s record by .16. Raimondi has played a huge role in Italy’s medal dominance at this meet, taking home now four gold medals and one bronze. His Italian teammate Antonio Fantin won the men’s 50 free S6 with a championship record time of 29.16 after a battle with the previous record holder, Nelson Crispin Corzo of Columbia. Corzo has held the record since 2019 but 20-year-old Fantin beat it by .03. Corzo finished 2nd (29.68) to take home his 3rd medal of the meet while Fantin won his 3rd gold medal in Madeira.

Championship records were broken on both the men’s and women’s sides of the 50 fly S7 event. First, world record holder Danielle Dorris of Canada broke the second championship record in the women’s 50 fly s7 by touching the wall first at 34.01. The 19-year-old’s world record still stands at 32.99, but she won today with a solid .80 lead over the field. Then, Ukraine’s Andrii Trusov had an especially tight race with Columbia’s Carlos Zarate Serrano in the men’s event which pushed him to crack the championship record with a time of 29.28. Zarate Serrano finished 2nd (29.38), and both swimmers now have won 2 gold medals each at this meet.

In the men’s 100 free S11, Rogier Dorsman of the Netherlands came within .50 of the world record set by USA’s Bradley Snyder in 2016 to win gold. He touched the wall with a new championship record time of 56.65 and a 2-second lead over the field to secure his 4th gold medal of the meet.

The last championship record to fall was the women’s 50 freestyle S13 where Australia’s Katja Dedekind won gold with a time of 26.98. She crushed the previous record set by world record holder Carlotta Gilli of Italy in 2017 by .05. Gilli finished 4th today (28.29) but it was a tight race for 2nd place between USA’s Gia Pergolini and Japan’s Ayano Tsujiuchi. 18-year-old Pergolini ultimately untouched Tsujiuchi by .27 to win silver, her fourth medal of the meet.

Para-swimmers broke three more continental records Thursday, starting with the men’s 400 free S9 where Italy’s Simone Barlaam, fresh off his 100 free S9 world record swim yesterday, won with a time of 4:10.78. This was Barlaam’s 3rd gold medal of the meet – he has won every individual event he has swum so far. France’s Ugo Didier was close behind to win 2nd (4:11.16), repeating their 1-2 finish in the 100 free S9 event yesterday. In 3rd place was Brenden Hall of Australia who has held the world record in this event since 2013.

Two African records fell as well. In the women’s 100 breast SB5, Egypt’s Ayaallah Tewfick won bronze with a time of 2:01.86 while in the men’s 50 fly S7, South Africa’s Christian Sadie finished 4th with a record-setting time of 30.15.

Great Britain had an incredible showing in the women’s 200 IM SM14 where they swept the podium. Bethany Firth secured her 3rd gold medal of the meet (2:26.69) and she was followed by Jessica-Jane Applegate in 2nd (2:30.19) and Louise Fiddes in 3rd (2:32.10). This major medal-scoring event helped Great Britain maintain their #4 rank on the medal table alongside gold medal wins in the women’s 100 breast SB5 from Grace Harvey and in the women’s 400 free S9 from 18-year-old Toni Shaw.

In the men’s 100 freestyle S12, Azerbaijan’s Raman Salei won gold (53.07), overthrowing world record holder Maksym Veraksa of Ukraine who finished in 3rd place (54.13). Veraksa has held the world record in this event since 2009 when he set it at 50.91. Salei has now swept both sprint freestyle S12 events following his 50 free victory earlier in the meet.