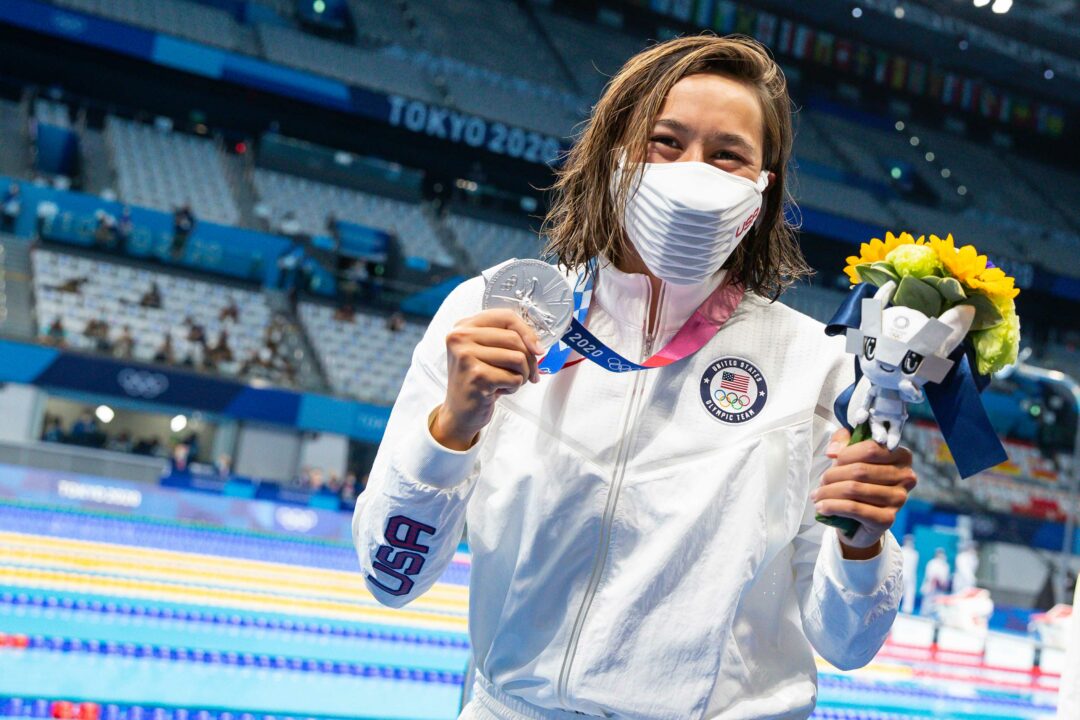 Speedo has announced the signing of Olympic silver medalist Erica Sullivan, adding her to their growing roster of collegiate-sponsored athletes. Archive photo via Jack Spitser/Spitser Photography

Erica Sullivan is the newest member of #TeamSpeedo

Sullivan, a first-year at Texas, won an individual silver medal in the women’s 1500 freestyle during her Olympic debut in Tokyo last summer. Following her win, Sullivan gained celebrity status in the media as one of the only openly gay swimmers to ever medal at the Olympics.

In the short course pool, Sullivan is currently ranked as the 2nd fastest 1650 freestyler in history, only behind American Record holder Katie Ledecky. Despite it only being her freshman season, Sullivan also already holds a lifetime best in the 500 free of 4:34.07, which would have placed 2nd at the 2021 NCAA Championships.

After graduating in 2018, Sullivan initially committed to USC, but opted to defer her enrollment until after the 2020 Olympic Games. After the Games were delayed and USC’s coach Dave Salo retired, Sullivan ultimately switched her commitment to Texas’ class of 2025.

i believe in the words of Big Mac #1

Damn, forgot she’s class of 2018. She’s a freshman while people her age are seniors. No judgement, just interesting, I forgot about that fact and kind of grouped her with the two Sandpiper teens in the same “age group”

seems that you get a 1 year grace period, and then from then you have 5 years to compete in 4 seasons. Sullivan’s grace period would’ve ended in 2019, and then she would have the opportunity to swim 4 seasons between 2019-2024.

Under the usual rules that would mean just 3 seasons in 3 years (so every redshirt year would just mean 1 less year of swimming), but idk how Covid affects that

There’s an extra Covid grace year, and there’s also an available grace year for athletes training for Olympic Trials/Olympics (in many team sports, competing at the Olympics requires a year off from school to train with the national team). Gymnasts are being allowed to “stack” the Covid year and the Olympic training year (many deferred 2019-2020 to train for Olympic Trials and then deferred 2020-2021 when the Olympics were postponed). I presume that if gymnasts are being allowed to do so, swimmers will be allowed to do so as well.

Interesting, I presume that means that Sullivan still has the full 5 years to compete in 4 seasons then? First grace year for free, second for Covid, third for the Olympics?

Is this something new? I know someone who didn’t go to college until 10+ years after high school and was eligible to still swim NCAAs.

What Division? And we’re you in the military?

D3 and wasn’t me as I said. Late 90s I believe. She was in her 30s. One of the most successful masters swimmers of all time.

D2 and D3 have different eligibility rules than D1

Agreed. What about the international freshman who are starting at age 22-24?