Tokyo Relay Speculations: Are King & Efimova Off Their Medley Relays? 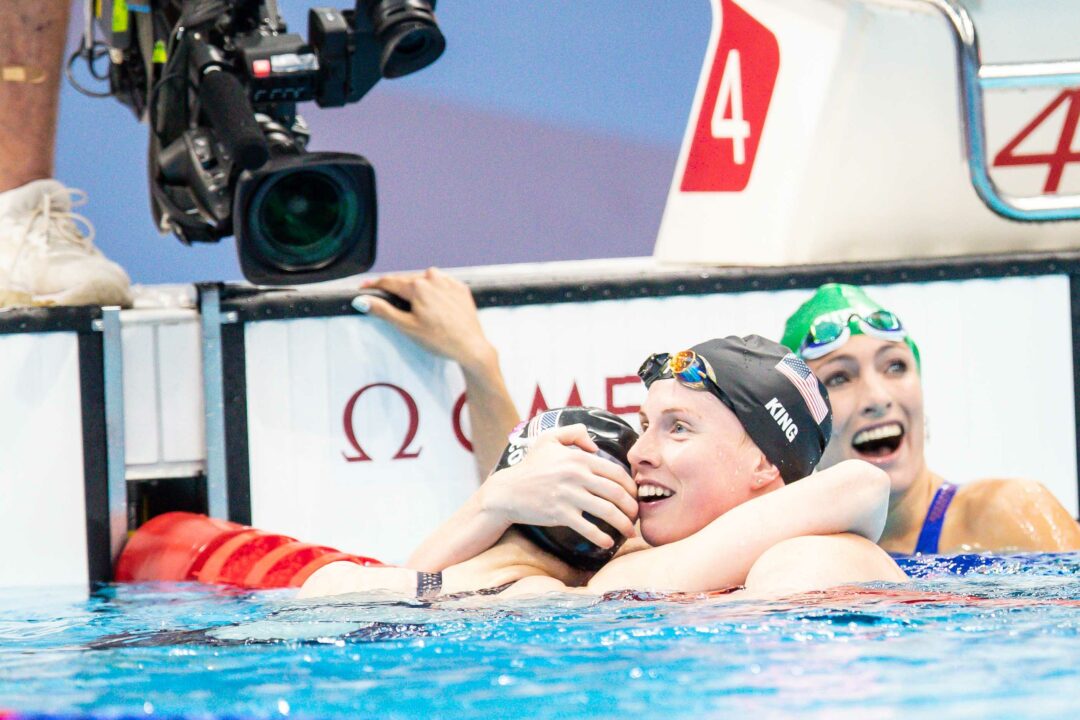 Teens USA's Jacoby and ROC's Chikunova bested their veteran teammates King and Efimova in the 1BR final. But will the experienced vets keep their relay spots? Current photo via Jack Spitser/Spitser Photography

While most of the time each country’s designated swimmers remain on their relays, there is always the chance a mid-meet swimmer swap could occur. Most recently, Simone Manuel was placed on the USA’s finals 400 free relay despite only having qualified in the 50 free individually.

On day three, the the men’s 200 free final was contested, where Brits Tom Dean and Duncan Scott finished 1-2 as Brazil’s Fernando Scheffer took the bronze. Tonight will be the men’s 800 free relay, which you can read more about here.

The women’s 200 free semifinals saw defending Olympic champion Katie Ledecky of the USA advance to the final while USA veteran Allison Schmitt placed 10th. While Schmitt will likely be on the finals 800 free relay, there is always the scenario a relay member could be replaced on the finals relay with another swimmer. Rewinding back to Rio 2016, Missy Franklin, who placed second at U.S. Trials in the event, had an underwhelming meet and wound up being replaced on the finals relay. Franklin was replaced by IMer Maya DiRado, who had only swum freestyle during her IM races.

Qualifying into the women’s 200 IM final for the USA are NCAA teammates Kate Douglass and Alex Walsh, with Douglass closing her 50 free in a 30.78 after taking the first 50 fly out in a 27.17. When building the case for DiRado, she had both the closing 100 free from the 400 IM and the closing 50 free in the 200 IM as markers for how she could do with her 200 free leg. On a different note, Douglass only has the final 50 free in her 200 IM to flex any potential persuasions to be on the 800 free relay, but that would be if anything out-of-the-ordinary occurred.

Other 200 free finalists who would shake up their 800 free relay roster from the 200 IM final include Brits Abbie Wood and Alicia Wilson along with the likes of Japanese Yui Ohashi and Canadian BR/IMer Sydeny Pickrem.

On the backstroke side of things, Russians Evgeny Rylov and Kliment Kolesnikov toppled American Ryan Murphy in the men’s 100 back final. Then, Aussie Kaylee McKeown took gold in the women’s final ahead of teammate Emily Seebohm with USA’s Regan Smith taking bronze ahead of teammate Rhyan White. Most backstroke positions should be locked in at this point for most nations barring anything unusual happening.

After both Americans Michael Andrew and Andrew Wilson missed the podium in the 100 breast final, 200 breast swimmer Nic Fink has the potential to build his own case to go on a medley relay if his swims are exceptional. Yet the real head-scratcher is who will swim the breast leg for the American and Russian medley relays following the women’s 100 breast final results?

Teenager Lydia Jacoby defeated defending Olympic champion Lilly King in the 100 breast final, 1:04.95 to 1:05.54. At the same time, ROC teen Evgeniia Chikunova touched out veteran teammate Yuliya Efimova by 0.12s for fourth place, 1:05.90 to 1:06.02. Since Jacoby and Chikunova had the top finals placement, they should go on the finals medley relay, right? Not quite yet.

While Jacoby won the final, her 1:04.95 is a fresh lifetime best whereas King is 1:04.13-capable from a flat start. In the same manner, Efimova has been on numerous finals medley relays versus the rising Chikunova. Comparing the four swimmers’ 100 breast swims throughout all three rounds in Tokyo, King and Efimova both were faster than their younger teammates only during the semifinals. Looking at the closing 50 splits, Jacoby and Chikunova had the two fastest closing splits of the entire field across all three rounds during the final at 34.21 and 34.28 respectively.

I’m all in on Hinds swimming the prelims free leg. Let her get that gold. She’s earned it

Hinds did a great job on the 4×100 Free, but 2 free only athletes had faster splits than her. She hasn’t earned a Medley relay slot at this point.

It would be a close call for Russia, but I think Jacoby is the obvious choice for the US,

There are a few exceptions I can think of including in Athens 2004 when Phelps himself decided to give Crocker the finals swim and he swam the prelim instead. Also in London 2012, Hardy swimming the prelim (missy was the other 100 swimmer but she swam backstroke) but Schmitt doing the final even though she didn’t swim the individual 100- this situation is completely different to the one happening right now anyway

This olys jacoby has shown she can handle the pressure. Besides she earnt it by finishing first and beating the reigning Olympic champion and… Read more »

A. Ride the hot hand!

B. More importantly, you don’t leave THE GOLD MEDALIST off your relay.

1
0
Reply
He said what?
Reply to  Walter

Catie was a world record holder but not an individual Olympic Gold medalist.

About 5 years later I went to the National Portrait Gallery in Canberra & I saw a large portrait of 5 absolutely ripped ladies which dominated the room of pioneers & the usual lot that have portraits.

Yes no 2 had admirably chutzpah-ed herself in the pic . Now all the arty crowd think there are 5 in relays ! If US wins & a portrait is painted I fully expect Lily to also get in .

Checking Out the Medley Relay Mayhem

There is one major implication from Jacoby’s win in the 100 breast: she, not King, will handle the breaststroke leg for the U.S. women’s medley relay at the end of the meet, and Jacoby may end up swimming on the mixed medley relay as well. That will be her first time competing on a high-pressured international relay – but of course, the Olympic final was her first race of any kind at a major meet, and she handled that pressure just fine.

The American women’s medley relay has mostly taken shape already. Besides Jacoby on breaststroke, she will have fellow teenagers swimming before and after her with Regan Smith on backstroke and Torri Huske… Read more »

Hot off the press:

The best indicator of that to happen wil be if Mrs (Mr) Smith-King-Huske-Manuel changes the name to let say S-J-H-W.
😀 😀

King better be off. She never performed great on relays anyways. And if we go in a bit behind from backstroke, Lydia will run everyone down on that last 50.