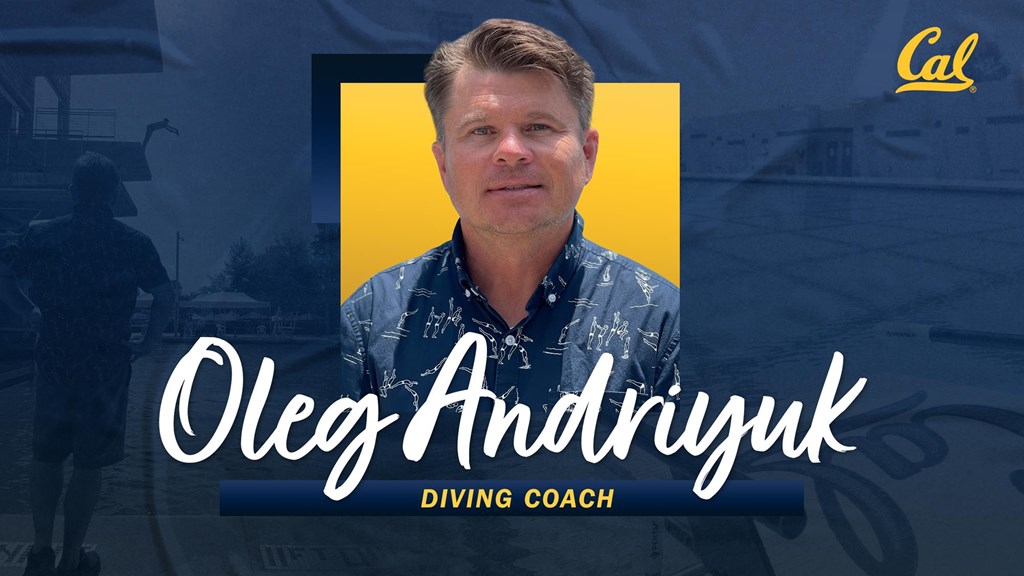 Oleg Andriyuk, who served on the United States staff at the Rio 2016 Olympic Games, will take over the diving program at Cal. Archive photo via Cal Athletics

In what has become the busiest off-season for the NCAA Division I Collegiate Coaching Diving Carousel in recent memory, the Cal Golden Bears are the latest major program to announce a new head diving coach.

Oleg Andriyuk will take over the post leading the Cal diving program after a 12-year tenure across the bay at the Stanford Diving Club. He takes over the post from Derek Starks, who was the Cal coach for 5 seasons.

Andriyuk doesn’t have any D1 collegiate stops on his resume, but he does have stops at two diving clubs associated with Pac-12 programs. Prior to 12 years at the Stanford Diving Club, including a decade as head coach, he spent 9 years as a coach with the Trojan Dive Club in Southern California.

Prior to that, he was the head coach at Division III Claremont-Pomona Colleges and with Sports Club Azov in his native Ukraine.

While the swimming programs at Cal are administered separately, the two share a diving coach. Since 2009, the men’s and women’s teams at Cal have each won 4 NCAA team titles, with the most recent being the men’s 2019 championship.

But throughout those runs, neither team has been able to sustain a substantial national diving presence.

The Cal women scored 125 diving points at the 2021 Pac-12 Championships. That was the fewest of the 6 conference schools that sponsor diving (Washington State does not have a diving program).

The Cal men only entered 1 diver in the Pac-12 Championships, Tyler Wesson, scoring 22 points – also lowest in the conference.

And yet both teams won Pac-12 titles, even with the diving deficit.

“I am honored to accept the diving coach position at Cal and be a part of this hard-working and well-decorated program,” Andriyuk said. “I feel privileged to join such a legendary Cal Aquatics staff and I am excited to work side-by-side with all the coaches. My ultimate goal is to contribute to the overall results to help the Cal men’s and women’s swimming & diving teams win future national titles.”

The Stanford Diving Club had a #1 national ranking in 2018, and Andriyuk received the Moose Moss Age Group Award, given annually to the most outstanding age-group diving coach in the nation. He also earned the Dick Wilson Memorial Award, which recognizes the most-improved age-group club in the country.

Among his international assignments include as a Team USA assistant at the Rio 2016 Olympic Games, where he helped Kristian Ipsen earn the United States’ first top-five finish in the men’s 3-meter event in 16 years. He was also on US staffs at the 2016 FINA World Cup, 2015 FINA World Championships, and 2014 FINA Junior World Championships.

At the 2021 NCAA Men’s Swimming & Diving Championship meet, Texas won by 27 points ahead of Cal. While Cal’s swimmers scored more than Texas’ swimmers, Texas’ divers scored 83 points – more-than-enough to close that gap and give the Longhorns the team title. Because divers count as only a part of a roster spot at the NCAA Championships, teams with multiple qualified divers can take more athletes to the meet than teams without divers – with the Texas and Cal men being the only teams for whom that is consistently a factor.

The Texas Longhorns, besides their success in swimming, have the best diving program in the country, which has contributed heavily to their dynasty that has won 4 of the last 5 NCAA Championships.

Corrections:
Briana Thai was Cal’s most recent national qualifier (2020 & ‘21).
Phoebe LaMay qualified to NCAA’s all four years (2016-‘19) and scored for the team in her senior year.
Tyler’s last name is spelled WESSON.

Happy for Oleg and the divers. Wishing them nothing but the best.