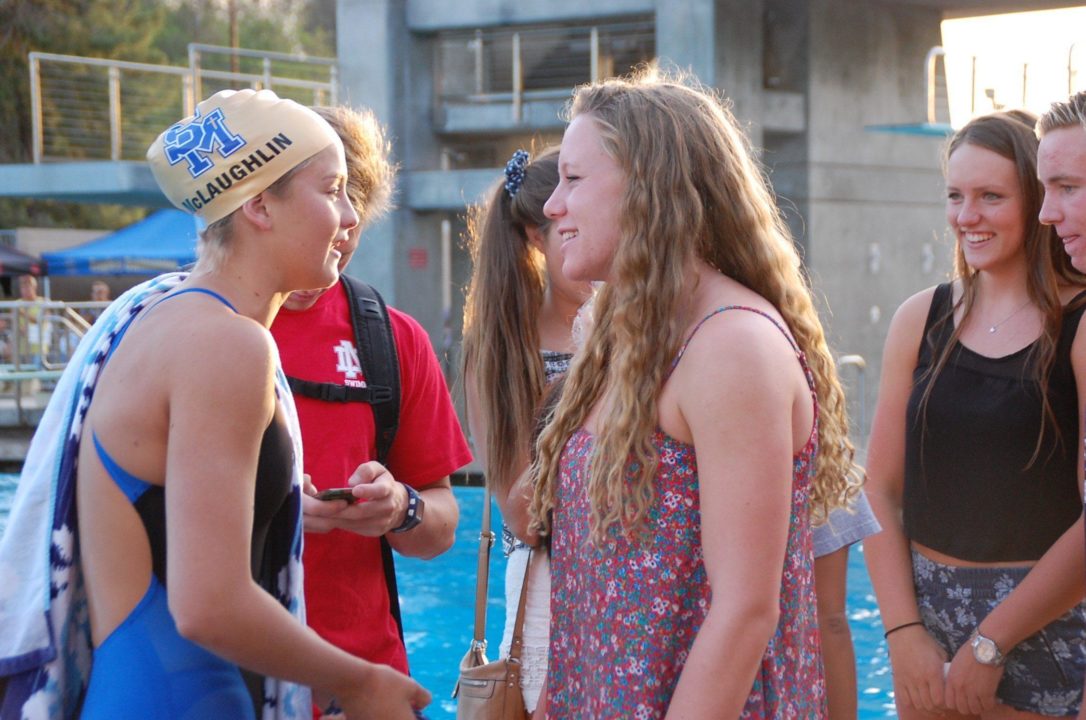 Social distancing will be a big focus of the return to the pool after quarantine. But, social grouping should be on your mind too. Archive photo via Anne Lepesant

Among a number of pearls dropped by Marsh, who is the former CEO of the massive USA Swimming club SwimMAC Carolina and currently working with the JBaraccudas club team in San Diego, was a valuable thought on how to return groups to swimming.

As more-and-more teams across the country are being allowed to return to training, Marsh recommends that teams focus on returning swimmers by social group, rather than necessarily by their old practice groups.

This means that, even if you have a 12-year old who normally trains with the high school swimmers because they’re fast, you should consider letting them return to training with the other 12-year olds, for example. Age is the most blunt measure of social groups, though there are other more nuanced ways to enact this broader strategy depending on your club’s situation – if you have a large team that covers a wide geographic area, for example, grouping by schools could be another thing to consider.

As swimmers return to the pool after months out of school, out of the water, and for most, without seeing their friends (or, at least, many of their friends), there are going to be a lot of dynamics at play – dynamics that shouldn’t be ignored.

Short of the handful of swimmers who are targeting the Olympic Trials next summer, the first priority will be swim practice as a social outlet. This doesn’t necessarily mean everyone hugging each other; but, simply being in the presence of their peers, after months of only hanging out with their parents and their siblings, will have the biggest immediate impact on what they’re doing, both in and out of the water.

The way that you communicate social distancing rules to younger swimmers versus older swimmers will matter too.

Especially in the first few weeks, where for most swimmers the focus will be ‘getting back into shape,’ a few lost weeks with a lower training group shouldn’t dramatically harm any swimmer’s long-term development.

Since Marsh’s comments, our country has changed dramatically in a very different way as well. Ongoing protests sparked by the killing by Minneapolis police officers of unarmed black man George Floyd has pushed even the coronavirus aside as the overwhelming topic of the day. While some small or rural communities may still be isolated from what’s happening, for many athletes around the country, these conversations will bleed over to the pool deck.

After everyone is back and in their rhythms

So when you’re thinking about how to safely enact social distancing during your returns to practice, don’t overlook social grouping, either.

Regardless of coronavirus, I feel it is valuable to group a fast 12 year old with other 12 year olds. There might be some exceptions out there where the team is small, but swimming is a social sport. When your an age group swimmer, especially 12 and under, swimming is about friends and developing technique.

This shouldn’t be a hard & fast rule though. My 12 yr old is one of the fast ones who trains with the senior group but that is her social group – at swim & school. She is the youngest in her grade. It was her social group before corona so it should continue to be. We started practices back in May 4th and she was so excited to be back with who she considers her peers vs. the younger group which would include her 11 yr old brother.