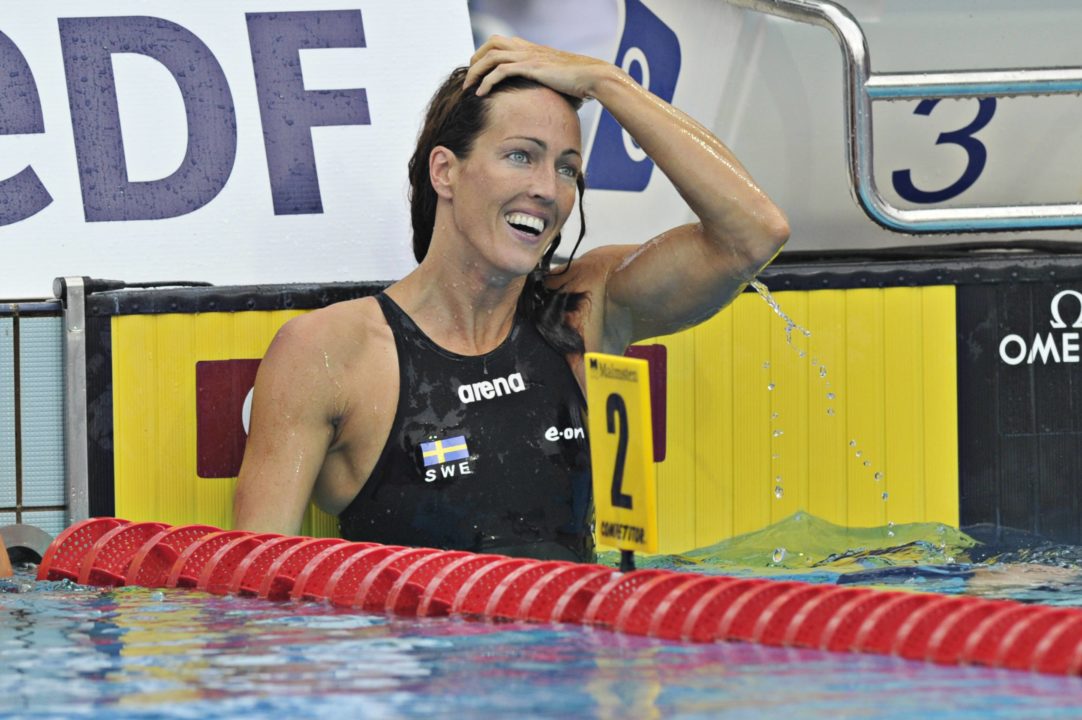 Therese Alshammar has confirmed that she hopes to race at her 7th Olympic Games this year as a member of the 4x100 freestyle relay. Archive photo via Lapresse

Swedish sprint legends Sarah Sjostrom and Therese Alshammar continued their comeback campaigns on day 2 of the Mare Nostrum Series in Canet, France. Sjostrom’s hiatus from competition has been much shorter, lasting from February 2021 when she broke her elbow while Alshammar’s made her return more than 4 years after her November 2016 retirement.

Both Sjostrom and Alshammar raced the 100 free on day 2 of the meet. Sjostrom earned a bronze medal in the event with a 54.84 while Therese Alshammar wound up in 8th place in the B final with a 58.41. That was an improvement for Sjostrom upon her prelim swim of 54.90 while it was a bit slower for Alshammar compared to her morning swim of 58.82.

This is the first step back for Sjostrom en route to the Tokyo Olympics at which she is expected to race the 100 freestyle. Sjostrom said in a post-race interview with SVT Sport that she hopes to develop more speed in the coming month.

Alshammar also spoke to SVT after the race and explained that she hopes to qualify for the Tokyo Olympics in the 4×100 freestyle relay. In order to do so, Alshammar will likely need to rank within the top 6 Swedish women throughout the Olympic qualifying period of March 1, 2019 – June 27, 2021. That will mean a decent drop from Alshammar’s 58.41 considering that current 8th rank Alicia Lundblad holds a 56.49.

Discussing Alshammar, Sandmark mentioned the June 27 deadline and noted that they planned to make final decisions on who they will take to Tokyo at the last minute, likely in order to consider all their options.

While Alshammar isn’t entered to race at the next stop of the Mare Nostrum series later this week in Barcelona, she will have more opportunities to improve her 100 freestyle time including at the Sette Colli Trophy in Italy later this month.

In addition to the 100 freestyle, both Sjostrom and Alshammar raced the 50 free on day 1 of the meet. Here is a full summary of their prelim and final swims in both the 50 and 100:

Seems like she’s left it a bit late. I wonder when she began training again?

According to her, it was that weird-ass stretching routine and whatever brand of amino acids she was taking. In her 7 years off of competitive swim training, it’s not like she got Phelps fat and out of shape. She was a fitness nut. Not many elite women sprinters go to like 0% body fat. Her strength to body weight ratio was insane. Why couldn’t that be done without PEDs, which I assume you’re implying. If you haven’t been to a gym and have some 140 lb woman kick your ass with weights, you probably go to a crappy gym.

This headline is misleading

What’s misleading? Sjostrom went a 54.84 and Alshammar said she’s hopes to qualify for the 4×100 free relay…

Think it’s a language issue. “Confirms” made me think twice about whether that was some non-U.S. way of saying she made the cut.

Still has the wr in the 50 scm fly iirc.