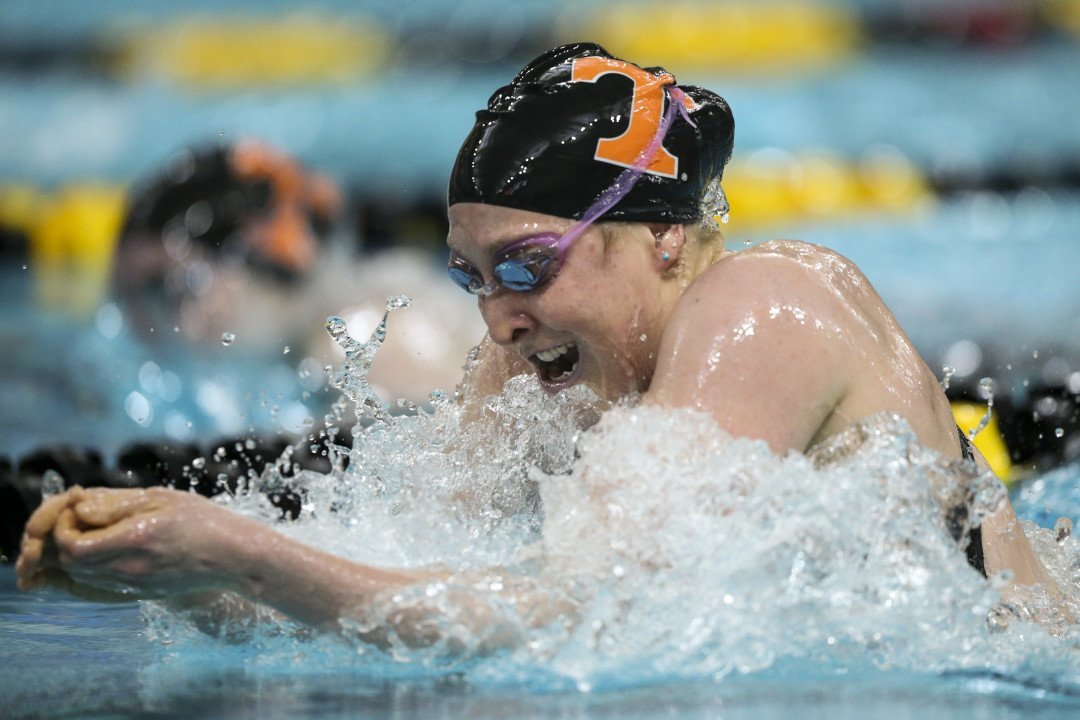 US National Teamer Erica Sullivan is the top seed in the women’s 800 free on Thursday, the first day of the 2021 Pro Swim Series.

Micah Bohon and Tjasa Pintar each won 1 individual event, and Bohon was a member of the 400 free relay with Brown. Micah Bohon went 54.49 in the 100 back to win the event. That time is right about the average of her dual meet times this season. She also led off the 400 free relay in a 50.40, which is her 2nd slowest 100 of the season. She was also the fastest leg of that relay, even though she was the lead off. Tjasa Pintar took the 100 breast in a time of 1:02.51.

The Lady Vols (6-2) won 14 of 16 events — taking first in all swimming competitions — en route to the conference victory. The loss snapped a four-meet winning streak for Arkansas (6-3).

The Lady Vols picked up major points in the sprints, finishing 1-2-3 in both the 50 freestyle and 100 freestyle behind Moseley’s efforts.

QUOTES
Tennessee Head Coach Matt Kredich:
“There’s a different vibe when it’s one team only. I felt it was important we establish more of a competitive identity as a women’s team. This gave us the opportunity to do that. We had an early-morning meet, and I was pleased how the team handled challenges of a quick turnaround this weekend. We displayed more discipline than we did last weekend. We were upbeat and competitive the whole time. We continue to see development in the a lot of areas, and you could see it with the freshman.

“Stanzi had a great meet today. She was in control of all her races and all her speeds. It’s nice to have her healthy and on top of her game. Meghan Small had a good day as well. In the 50, after Stanzi, Bailey Grinter was right there in second. She’s made some strides in the last month or so. Amanda Nunan continues to be a rock for us. Tess had a solid meet as well; she really woke up in the second half of the 500 and had a great finish. we had a lot of contribution across the spectrum. There’s clearly some progress from some key people, and that’s great to walk away with.”

Tennessee Diving Coach Dave Parrington:
“As expected, the Arkansas divers were very tough. We did some good stuff and it was a good opportunity for our young ladies to go head to head against a talented ark diving squad. We didn’t dive as well as we might have been able to do, but I did see some good things today. Rachel missed her first dive on 3-mter and came storming back. It was good to see her resiliency after the ankle roll last week.”

“Today was a great day for our seniors,” said head coach Neil Harper. “To be able to host and compete against a top-10 team in Tennessee and recognize all of the many contributions of our seven seniors was nostalgic, emotional and was a tremendously proud day for our Razorbacks. We competed well and were led by our divers. Winning both events was very exciting. Several of our swimmers stepped up and were close to or recorded their best in-season times. This is the hardest phase of our training heading into the SEC Championships in four and a half weeks. We have stayed committed and focused on that and look forward to fine tuning and tapering when the time is right. We still have some more hard work and two more away meets before them, so we have to stay positive, focused and continue our strong belief in each other.”

In all, Arkansas seniors combined for nine of the 17 top-three finishes for Arkansas Saturday.

The meet started off with a third, fourth and sixth-place finish for the Razorbacks in the 200 medley relay. In the first individual event of the morning, sophomore Ayumi Macias placed third in the 100 freestyle in 10:06.97.

Tatlow followed Strathman with a second-place finish in the 200 fly in 2:01.77. Arkansas record second, third, fourth and fifth-place finishes in the event.

At the first diving break, freshman Brooke Schultz controlled the one-meter dive, scoring a 344.78 to claim first. Senior Nicole Gillis put up a solid showing, finishing second with a score of 301.28.

Freshman Marlena Pigliacampi touched second in the 100 fly in 56.89, prior to the second diving break.

On the three-meter boards, Schultz and Gillis mirrored their 1m showings, finishing first and second, respectively. Schultz scored a 344.18, while Gillis recorded a 334.50.

Arkansas will return to the pool on Jan. 19, when Arkansas travels to Houston to face the Houston Cougars and the Vanderbilt Commodores. Earlier in the year, Arkansas defeated the Commodores 133-67 in Nashville.