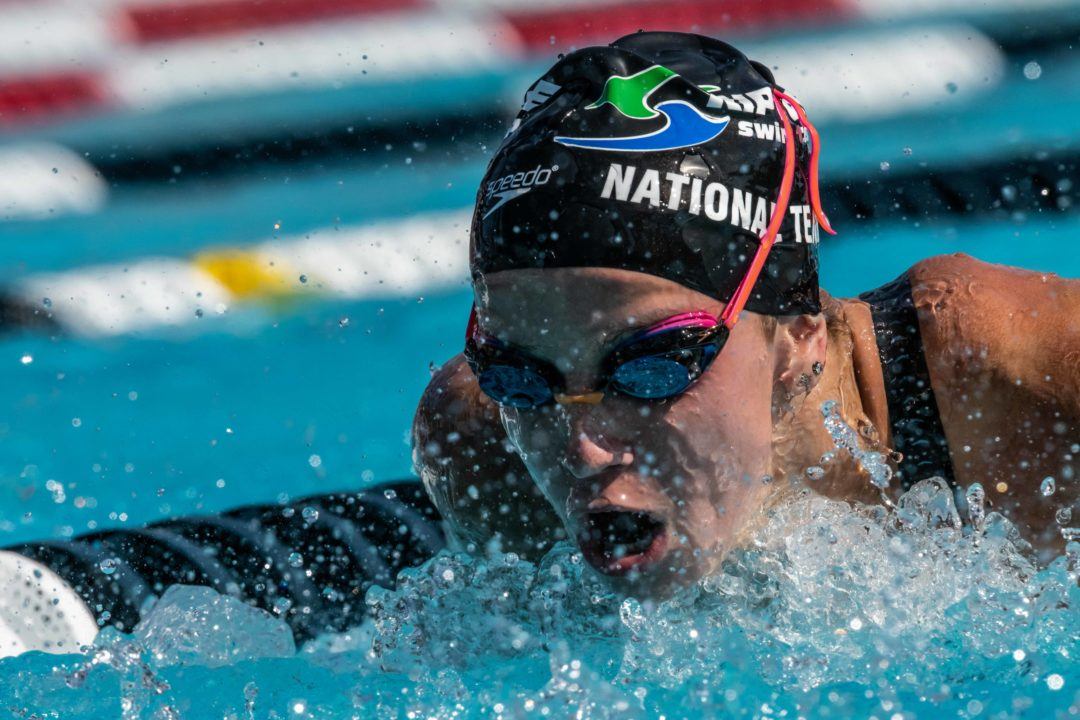 Our most recent poll asked SwimSwam readers to weigh in on Regan Smith‘s pro-vs-NCAA decision:

Question: Should Regan Smith turn pro instead of swimming NCAA?

61.4% of voters said Regan Smith should turn professional now, giving up her NCAA eligibility after breaking two world records over the summer.

The 17-year-old Smith was the breakout star of Team USA this summer, smashing world records in the 200 and 100 backstrokes at the World Championships. Smith has been the #1-ranked NCAA recruit in her high school class, but her father also recently spoke to the San Jose Mercury News, saying Regan Smith is frustrated that NCAA rules prohibit her from receiving world record bonuses.

The NCAA is still very entrenched in the idea of amateurism, even as more and more critics of that system arise. That’s caused tough calls for many swimmers, especially on the women’s side, where teenage sensations are the norm of the sport. Smith is verbally committed to Stanford for the fall of 2020. Fellow Stanford swimmers Katie Ledecky and Simone Manuel both turned pro before their collegiate eligiblity was used up, following the path of Missy Franklin, who swam just two years at Cal before turning pro. Meanwhile the former holder of Smith’s 100 back world record, Katheen Baker, also turned pro early after breaking a world record as a college junior.

Almost two-thirds of voters said Smith should skip college swimming entirely, while about 38% said she should compete in the NCAA.

Below, vote in our new A3 Performance Poll, which asks voters which non-Smith backstroker has the best chance of making the 2020 U.S. Olympic team in the 100 back:

I fully understand the need to go pro before the Olympics (millions of dollars on the line), I just think that it’s a shame that she’d have to miss out on the college team experience

The NCAA should fix this. Regan Smith should not be penalized for being successful at a young age. Put the money in trust if they think she will gain an advantage with it.

Considering starting my own college sports organization. Let me know if anyone is interested in joining!

Just go to Stanford still, train with the pro team there, and make tons of money while you’re at it

Best of both worlds!

The question is could she get into Stanford without swimming? Not saying she can’t, but that is one tough place to get in.

That’s why I feel super frustrated for her and all of the other NCAA athletes who can’t profit off of their own talent while getting an education.

Does Stanford make concessions for swimmers? I’m not exactly sure they do.

Stanford swimmers apply and get into Stanford based on their own academic merit, just like everyone else.

I don’t know how Stanford wouldn’t want to have someone who is literally the best in the history of the world at what she does. That sounds like a Stanford student to me, whether or not she is competing for them.

She’s already been accepted, so that point is moot. It would be a tremendous embarrassment for Stanford if they were to try to somehow rescind her acceptance on the grounds that she had decided not to swim there. It would be tacit admission that they show favoritism to athletes, and that a lot of athletes wouldn’t have gotten in otherwise, and while everyone knows that’s true, it’s still not the sort of thing that any top university would want to admit to in such a bald-faced fashion.

Is that how it works? The second you get in you are in even if you never join the team? I’m not sure that’s how it works.

Not sure it works that way with admissions. Greg is giving up one recruiting position. If she decides to go pro, I’m sure he wants to know soon.

I’m pretty sure that’s how it works as far as admissions. Obviously she’d have to give up the scholarship, but that’s a different matter. Imagine the bad publicity that would result if they said, okay, you’re not going to swim on our team? Then you can’t come here anymore. It would reflect negatively on the whole idea of higher education at a place like Stanford. (Again, I emphasize, I’m not suggesting for one second that athletes don’t get favored treatment and sometimes get in with lesser academic credentials; I’m just saying that turning around and saying “No, we don’t want you anymore” would put Stanford in. an incredibly awkward place, and they, like any top school, take great pains to… Read more »