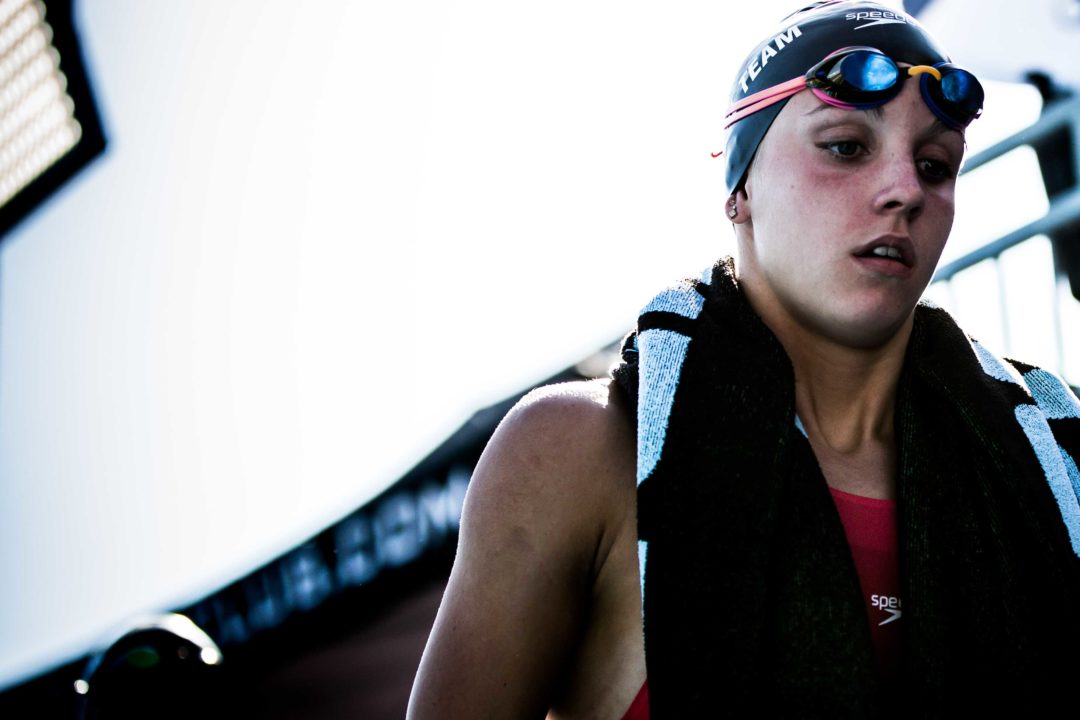 World record holder Regan Smith wants to swim in the NCAA but also wishes she could put away money she earns now for later in life. Archive photo via Jack Spitser/Spitser Photography

Smith, a rising high school senior, is slated to swim for back-to-back-to-back national champion Stanford in the fall of 2020 following her potential first Olympic berth that summer. Given that she’s now the fastest woman in history by .71 seconds in the 200 back and .43 in the 100 back, it’s safe to say at this point she would be a medal favorite in Tokyo. And with Olympic medals, comes money – from national governing bodies, and potentially, from sponsors. And that’s where NCAA eligibility comes in.

According to a recent article by the San Jose Mercury News’ Elliot Almond, Smith takes issue, at least to an extent, with the current NCAA model that prohibits her from receiving the world record bonuses she could otherwise get if she were a professional athlete.

“She is under all kinds of pressure to go pro with the Olympics coming up — that’s a lot of money,” he added. Regan, however, has wanted to attend Stanford since she was a kid, and is “almost certain” she’ll still go, Paul said. “If [going to Stanford] means the world to you, some sacrifices have to be made,” Paul said he told Regan.

NCAA swimmers are allowed to accept money from their national governing bodies (like USA Swimming), for medals won at the Olympics, but not bonuses for world records set. They also cannot accept sponsorships or do endorsement deals.

The Mercury news cites USA Today in saying that Katie Ledecky was able to keep the $355,000 in medal awards she won at the Rio Games, Ryan Murphy came away with $234,375, and Simone Manuel almost $200,000. Seventeen American NCAA swimmers were allowed to keep about $1.5 million in prize money, according to USA Today.

But as we know, Ledecky and Manuel both went pro before their collegiate eligibility was used up, both signing suit deals with TYR, among others.

Olympian Elizabeth Beisel, who swam all four years at the University of Florida weighed in on the situation: “As sad as I was to miss out on that money, especially in the London Games when I won my two medals, I knew the education and degree I was getting at Florida was far more important,” she said.

Bob Bowman, who coached Michael Phelps through turning pro before college, added: “You’re weighing your long-term financial security verses your long-term personal enrichment… You hate to have to give either one of them up.  Maybe the model has changed instead of all-or-nothing, some.”

The NCAA’s amateurism rules are some of the most controversial in sports today, especially in ones (like basketball and football) that generate massive amounts of revenue for schools. The pro-athlete side of the discussion is gaining traction nationwide, and the state of California has gone as far as to consider a bill, that if signed into law, would allow for NCAA student-athletes in California to profit off their name, image, and likeness beginning in 2023.

This shouldn’t have to be a choice. Amateurism in sports is a farce and has been forever. In order to compete you have to dedicate the majority of your time towards your training. We live in a society that tells people that they need to provide for themselves yet also tells athletes they are not allowed to profit off of their profession if they want a backup plan or the possibility of a normal life latter on. I know college swimming isn’t a cash cow but the fact the NCAA is allowed to profit off of an athletes likeness while they themselves cannot while they’re in the NCAA is preposterous!

As a British person it does seem crazy that young athletes have to make this choice. I think it’s maybe different in sports like football where there’s obscene amounts of money to be made by multiple athletes, but in something like swimming it just seems like you should be able to financially benefit from it whenever possible. I would understand colleges preventing their swimmers from competing in the ISL etc during the college season, and I think it’s fine to accept that as a sacrifice you make, but turning down all prize money (earned in or out of season) seems too harsh. In the UK, a lot of swimmers choose not to go to university while they’re still swimming (or… Read more »

It is absolutely senseless to not allow swimmers to keep their WR bonus at WC or Olympics. The athletes should get to keep the medal money and WR bonus. NCAA should not have power over national team’s major goals (winning gold medal representing the nation) and major events (WC, Olympics). I can see NCAA want to protect their image or amateurism, so the athletes would not be promoting other brands/teams during NCAA events or missing NCAA tournaments for other pro-events. But they should have no hold on athletes who are part of National Team representing the country. At least in swimming, NCAA swimming is over in March and all the national/international major events are in July/August.

As an Australian it seems weird and out of date. Sport (such as the Olympics) were originally amateur not because of some ideal or purity, but to keep the common and working classes out of sport.
Swimmers often have a very small window of opportunity to make some money…let them.

Punt Stanford and Take the $$$

Everyone I see different. Not only did Missy hurt her back before Cal but because there were other backstrokers, she didn’t compete in it often . That was a mistake on her. Missy should of had an understanding with Terri going into college about events she needed to do.

As it is MF had fantastic success in both lcm & ncaa .

The rules are what they are. It she wants to attend Stanford she can and she would have the money to pay for it if she turns pro. Men seem to get this, even though few have the option at age 17. Young women seem to romanticize college swimming. I get women value friendships/the experience more than young men who value the glory more, but use logic. She can probably make $5-$10MM over the next 9 years, maybe more if she wins both the 100/200 back at the Olympics. But if she fails to cash in after the Olympics or gets injured as we have seen others, then she could come away with nothing from her elite swimming. If we… Read more »

Regan could take the money and can still GO TO Stanford. She can still swim at Stanford with Greg Meehan. She just can’t go pro and still swim FOR Stanford. This idea that she has to forego college entirely or as Bowman calls it, “personal enrichment” is a false dilemma.

Some colleges may only allow post grads to train there. Not sure if standford will allow her too, maybe they will. I think if she can train for standford she should do so after the Olympics. Until then, go pro and keep training with her club its obviously working. Not taking the money (she can earn potential millions) is idiotic IN MY OPINION.

What is the logic behind allowing them to keep gold medal money but not world record money? Neither (to me) seem to be profiting off of image and are rather just rewards for incredible performance.

If you’re expecting logic from the NCAA, you’ve joined the wrong conversation.

I was just discussing this with my Athletic Director and the number associated with the “medal earnings” is the value of the medal itself, not actual bonus cash. Katie Ledecky was allowed to keep all her medals from the Rio Olympics and those medals totaled a value of $355,000. I was mistaken about this as well, until just a few minutes ago.

She shouldn’t have to!

Your AD is incorrect. Student-athletes can keep prize winnings from one international meet/year and maintain their eligibility. This includes Olympics or Worlds. They cannot keep bonuses for WRs.

This is 100% incorrect. I also am concerned on your ADs competency if he stated that.

Your AD may want to reconsider the profession.

Too many lawyers with time on their hand

I agree. I don’t know who get to decided why WR bonus is not okay but medal money is. I personally think that NCAA should have no hold or control if the athletes is representing the country at international meets as Team USA / national team.

Breaking swimming WR is in meter while NCAA is in yards… as long as athletes is not getting money for breaking a yard record in international meet, I say give the swimmers their WR bonus!