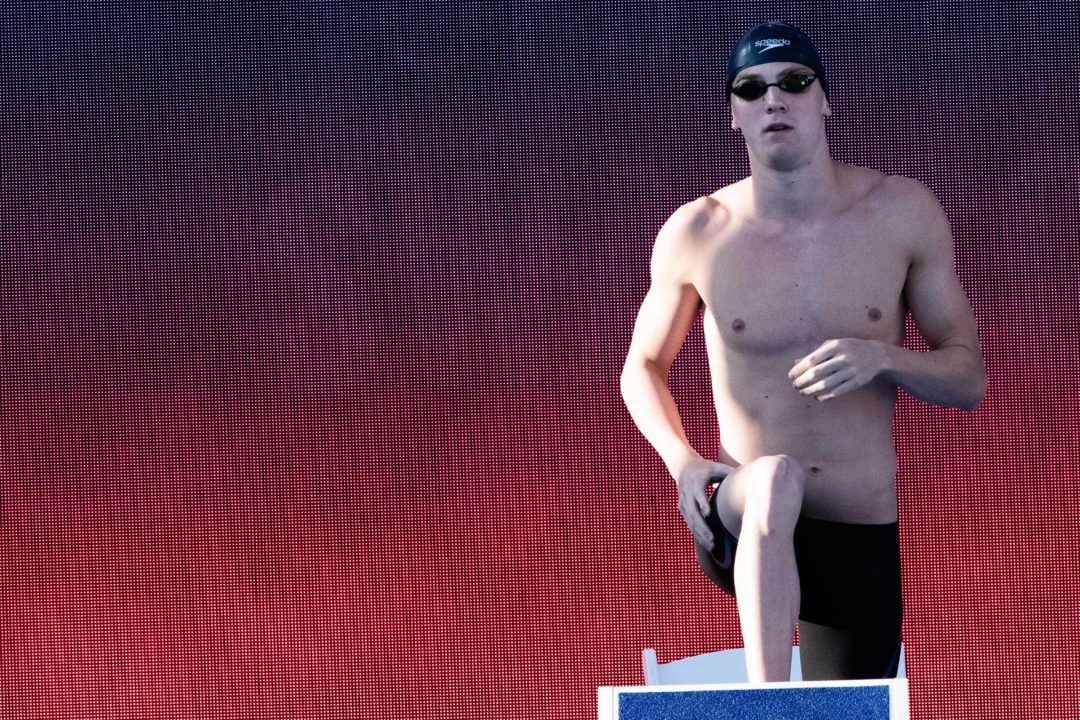 On the opening day of the Cleveland Sectionals, Michigan swimmer and national team member Charlie Swanson posted the 10th-fastest US time in the 200 breast. Stock photo via Mike Lewis/Ola Vista Photography

The first meet record was broken by Michigan Wolverine Charlie Swanson, crushing the former mark of 2:15.91 with his finals time of 2:11.88. The national teamer’s time marks a new season best and just missed his 2018 US Nationals lifetime best of 2:11.07, ranking him 10th in the US this year. Finishing in the top 3 behind Swanson were Hudson Explorer’s Ross Palazzo (2:16.51) and Bearcat’s Dominic Polling (2:17.40).

The second sectional record was in the women’s 800 free relay, won by the Ohio State Swim Club quartet of Georgia White, Lucija Jurkovic-Perisa, Katherine Trace, and Nicole Fye. The team eclipsed the former record of 8:18.48 with a 8:16.73. Finishing behind Ohio State were the A and B relays from Club Wolverine.

Earlier during the distance session, Ohio State’s 800 free relay anchor Nicole Fye went on to win the women’s 800 free with a time of 8:52.19. Taking second place was Hudson Explorer’s Paige McCormick (8:53.51) and third went to Powel Crosley Jr YMCA’s Lucy Callard (8:56.79). McCormick also picked up a silver medal in the women’s 200 back with a 2:14.55. Narrowly winning the event was Club Wolverine’s Sophia Tuinman with a 2:14.14. Taking third in the event was Wolverine teammate Alexandra Nelson (2:16.52).

Into the women’s 50 free, Ohio State’s Taylor Petrak (25.86) barely touched out Club Wolverine’s Sydney Stricklin (25.89), both going lifetime bests and achieving the 2020 Olympics Trials cut. For 16-year-old Stricklin, she now ranks #15 in the US for all 18&U swimmers and is tied for the 61st-fastest time in the 15-16 age group all time. Ohio State swimmer Freya Rayner (25.96) finished third in the event.