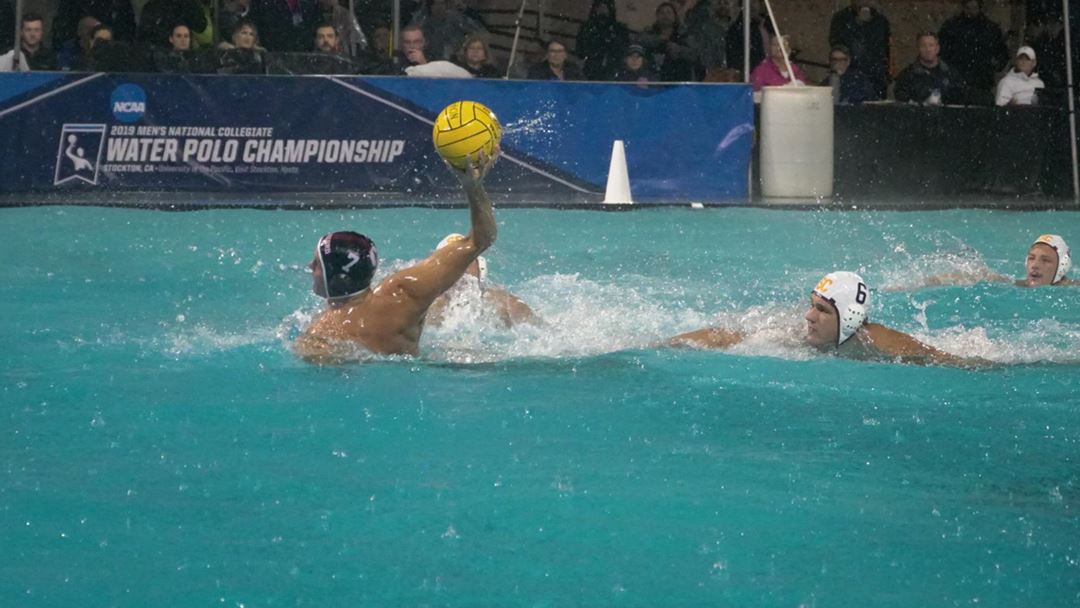 Stanford had to wait 17 years between its 10th and 11th men's water polo NCAA titles, but a 13-8 win over host #5 Pacific on Sunday ended that drought. Current photo via Stanford Athletics

Stanford had to wait 17 years between its 10th and 11th men’s water polo NCAA titles, but a 13-8 win over host #5 Pacific on Sunday ended that drought.

The Cardinal led by as many as seven at 10-3, but had to endure a late 3-0 rally by the Tigers before holding on for the victory.

Luke Pavillard notched three goals and Andrea De Nardi added two among five Pacific scorers as the Tigers made just their second appearance in the NCAA title match (also 2013). Joey Macleane started in goal despite playing in just two matches all season due to injury. Macleane allowed eight scores and made four saves, before being relieved by Jon Barry just before halftime. Barry made nine saves, while giving up just five goals.

DeNardi scored his second goal on a powerplay (1:26), but again Stanford answered, this time with a Hallock goal (1:04). The teams traded goals again to wrap up the opening stanza at 6-3 in favor of the Cardinal. Pavillard found the back of the net for Pacific (0:39) and Rossman finished a first quarter hat trick with 12 seconds left.

Dylan Woodhead (7:14) made it a four-goal advantage early in the second stanza. The teams combined for five shots, coming up empty over the next four minutes, before Stanford struck again at the 3:23 mark from Abramson. Pacific took a timeout and switched goalkeepers and Barry promptly recorded his first save. The Tigers then had a shot blocked and missed a second, before Hallock punched one home from close in (1:02) to put Stanford up 9-3 at the half.

Hallock hooked a shot into the goal at the 6:12 mark of the third quarter to extend the lead to 7 (10-3) and the Stanford defense continued to hold strong, registering two saves and two blocks. The Tigers finally broke through after a 15 minute drought, moving the ball around before Bogdan Djerkovic found the back of the net on a powerplay (1:32). Jeremie Cote followed just 42 seconds later (0:50) to pull Pacific within five (10-5).

The Tigers continued their rally with a third straight score, this one by Pavillard squeaked between the goalie and the post at the 4:54 mark of the final stanza. Stanford responded with 3:37 left as Killion ripped a shot from the angle to the right of the goal. Abramson then went far post to boost the Cardinal lead to 12-6. Jay Halva gave Pacific its fourth powerplay score of the night (1:57), only to see Killion rip one home just 30 seconds later. The Tigers had a penalty try with a minute to play, but it was saved by Chun. Pavillard would score one final goal for Pacific with 18 seconds left, but it was not enough to stop the Cardinal from earning the national title and leaping victoriously into the pool.

As a long-time Stanford water polo follower (since their first NC, in 1976)…and after suffering through some close calls during this drought…YEAH

…and Stanford has two sets of brothers from San Anselmo/Drake High!! Go Pirates!

Congratulations Stanford! Late game rally by SC yesterday was disheartening. I thought the team would have list.but was so excited when they won! Kudos for all the teams who played their heart out and.fine seasons. On to next year…