South America: Most of Brazil’s Medal Chances Slip Through the Cracks 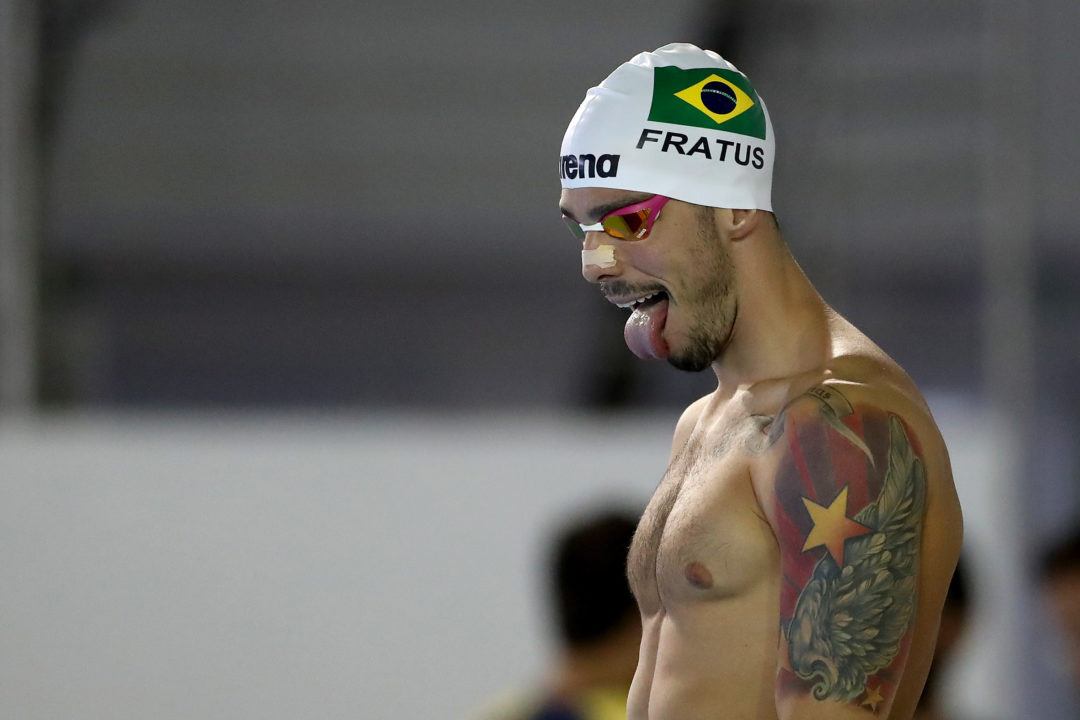 After a disappointing day for the host country Brazilians, the final hope for a swimming medal seems to lie on Bruno Fratus, who will compete in the men's 50 free Thursday and (possibly) Friday. Current photo via Satiro Sodre/SS Press

After just two days of the swimming competition at the Rio 2016 Olympic Games, the best chances for the hometown Brazilian team to medal may have passed them by.

Today marked what could’ve amounted to the biggest day of the week for the Brazilians, with the men’s 4×100 free relay, two swimmers in the final of the men’s 100 breast, and the women’s 100 back prelims: Etiene Medeiros‘s best hope at a medal.

Medeiros had a chance to make history as the first ever Brazilian female swimmer to win an Olympic medal. (The great Maria Lenk never had the chance to compete in the Olympics due to their cancellation in 1940 and 1944). Medeiros’s world-ranked performances have been breaking barriers for the Brazilian women, as part of a wave of female athletes helping to change attitudes about women in sport. As recently as 1979, it was illegal for Brazilian women to play sports like soccer competitively or recreationally.

Unfortunately, Medeiros swam a disappointing 1:01.70 100 back this morning, missing the semifinals. Guilherme Guido, her male backstroking counterpart, made it through to semis but finished 14th overall with 54.16.

The Brazilian men have historically had more success on the world stage, most recently marked by Cesar Cielo‘s sprinting dominance that lead to a pair of 2009 world records that are still in the books.

However, Cielo missed the Olympic team this time around, and his successors weren’t quite fast enough land on the relay medal stand tonight.

Despite an opening 48.12 from Marcelo Chierighini that shot Brazil out first in the field, the team of Chierighini, Nicolas Oliviera, Gabriel Santos, and Joao de Lucca ended up fifth in the men’s 4×100 relay today with 3:13.21.

The other big medal chance for Brazil tonight was in the men’s 100 breast, which featured Joao Gomes and Felipe Franca Silva. Yesterday, Franca scored a South American record in prelims with 59.01, but in finals, Gomes took fifth with 59.31 and Franca was seventh with 59.38.

Now, the best chances for the team to score an Olympic medal on their home turf fall on the sprinting events. Chierighini comes into the 100 free ranked 12th with 48.20, Medeiros is 14th in the 50 free with 24.55, and Bruno Fratus goes into the men’s 50 free fourth with 21.50.

Given these standings, it seems as if the hopes of Brazil will lie on Fratus come Thursday and Friday, and, though the field is packed, he has a chance. Interestingly, Fratus does not get to use his relay lead-off from the Brazilian Open in December as his entry time, but that swim is the fastest time in the world this year: a 21.37.

If Fratus can make it past the crowded field of Florent Manaudou, Nathan Adrian, Vladimir Morozov, Anthony Ervin, and Cameron McEvoy, he may be able to make the Brazilians’ medal dreams a reality.

Here’s a rundown of past Brazilian Olympic medalists in swimming

Why wasn’t Fratus on he relay?